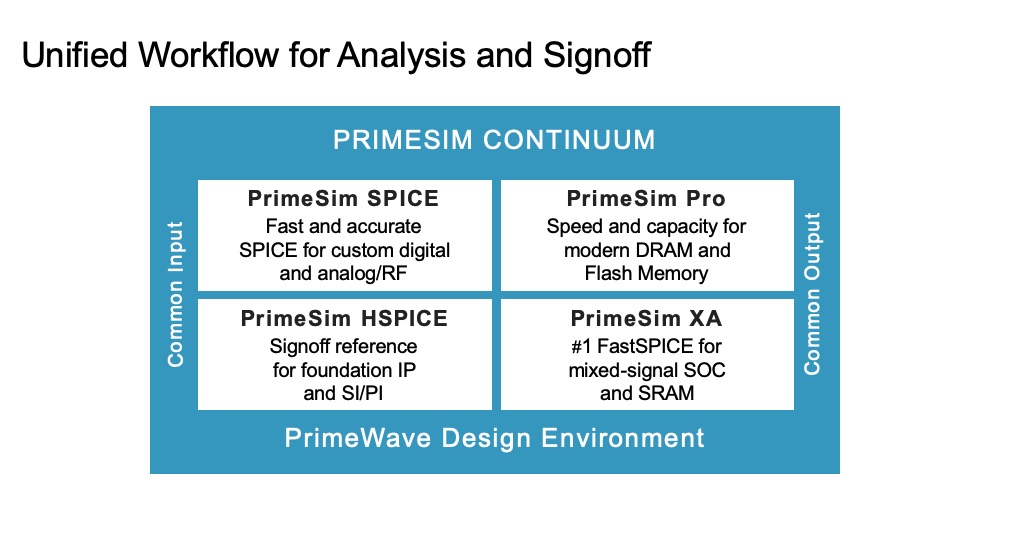 Just prior to this year’s Synopsys User Group (SNUG) meeting, I had a call with Hany Elhak, Group Director of Product Management and Marketing at Synopsys, to talk about their latest announcements for analog simulation. Synopsys usually has big things to talk about each year around this time – this year is no exception. Hany had a set of announcements to discuss that represent a major leap forward for their entire analog simulation lineup.

Under the moniker of PrimeSim Continuum they are rolling out a unified workflow for all their circuit simulation technologies, a GPU accelerated SPICE and a new FastSPICE architecture. Hany talked about how over the last 5 years advanced node SoCs have changed so that increased capacity and speed is needed for transistor level simulation. IOs are running at data rates over 100 Gb/s, embedded memories are larger and faster, and analog/custom content is increasing steadily. All of these factors and others are translating into the need to perform more analog simulations across many parts of today’s SoCs and their memory subsystems.

Previously there has been a balkanization of analog simulation technologies for each domain, such as libraries, memories, power distribution networks, IO circuits, etc. Likewise, with the rate of CPU performance-scaling slowing down the increases in capacity and throughput needed to keep up with design size and multi-corner analysis have not been available. Advanced process node designs have experienced reduced margins and increased parasitics, making analog simulation analysis even more important.

For the first time ever, Synopsys is taking advantage of GPUs to gain massive performance improvements. GPUs always seemed like they could offer big performance gains, but until they supported high precision floating point they were not suitable for SPICE. GPU performance year-to-year is moving at factor of 1.5, which means that by 2015 they will offer a 1000X performance advantage over CPUs alone. Of course, Synopsys has improved the overall performance of PrimeSPICE by 3X in the newest release, and there is good scaling with additional CPUs. However, adding GPUs can add an additional 10X over this.

PrimeSim Pro, their FastSPICE offering, now has a new architecture that runs 2-5X faster and can scale to handle billions of elements, opening the doors to running on larger designs for more complete SoC and memory subsystem verification. GPU acceleration is also available now in PrimeSim Pro. Synopsys has enhanced power block detection, optimized event propagation, and developed core independent partitioning for PrimeSim Pro. There are also improvements in advanced modeling. It supports math-based load models, net based coupling cap handling, and has a new RC reduction algorithm. These changes open up capacity for massive PDNs and simulation with full parasitics. In particular Hany pointed out how this will enable full simulation of multi-die SoC memory subsystems. His example showed full simulation of six 16 Gb die and their controller.

All of this would still be cumbersome to set up, run and interpret results without a unified simulation environment. Synopsys also announced PrimeWave, which provides a comprehensive environment for all advanced analyses. It works with all the PrimeSim Continuum simulators for all modes of analysis. According to Hany, it will be used for analog, memory, signal/power integrity and RF. PrimeWave has integrated waveform viewing and post processing, inside a flexible and programmable environment.

PrimeSim Continuum is tightly coupled with Custom Compiler for analog design acceleration. It is also integrated with VCS so mixed simulation will be easier and faster. Lastly, IP characterization will also benefit from PrimeLib’s integration into this design platform.

As is always the case, Synopsys has done extensive work during their product development with leading semiconductor companies to ensure the flow is fully tested and meets end user requirements. Their announcement is accompanied with endorsements from KIOXIA, Samsung Memory, NVIDIA and Samsung Foundry. They each report consistent improvements in runtime and accuracy. They also point to the common workflow as a big step forward in productivity.

Synopsys continues to maintain its track record for innovation and investment in its leading suite of circuit simulation tools. This should come as no surprise to anyone, but the ambitious changes in this announcement are gratifying to see. What is especially interesting is that they are making use of the formidable power of GPUs for the first time. GPUs offer massively parallel computing for applications that can be architected to take advantage of them. With GPUs now supporting double precision floating point operations and high capacity and bandwidth memory, they are now an excellent vehicle for SPICE based simulation.

The full announcement and all the details are available on the Synopsys website.