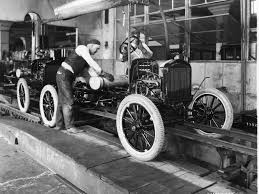 Semiconductor fabs have to run 24/7 to make money. They have to be running full all the time to fully utilize the high running costs and in the case of new fabs, high capital costs.

Unlike a brake pad factory hat can hire and fire people at will and source readily available materials on short notice chip fabs are run non stop by specialized employees.

Its a long pipeline to design chips, build the mask set, start wafers and then package and test the final die.

When auto makers hit the emergency stop button on their chip supply for Covid they didn’t realize how long it would take to restart production.

They also didn’t realize that semiconductor fabs can just as easily make microcontrollers for toaster ovens as they can for cars and that toaster oven demand is not as impacted by Covid as cars are.

Demand in other parts of the tech industry such as IOT has been stronger in 2020 so why in the world would I even consider going back to making chips for anti-lock brakes.

There have been reports in the media that over $60B in auto production has been lost due to semiconductor shortages.

We would be willing to bet that this shortfall and idling of auto workers and factories was likely caused by only a few tens of millions of dollars worth of semiconductor parts in critical areas.

Think about it….the lack of a $0.50 microcontroller can stop the production of a $50,000 car for months as the part is highly specialized and likely single sourced.

We think the auto industry has exposed the point of failure that the semiconductor industry is to the huge number of other industries that rely on it.

Trillions of dollars of many different industries rely on semiconductor chips that everyone assumes will always be there, freely available, and at low cost at a moments notice.

Older 8 inch equipment has been going up in price and equipment companies are selling more 8 inch stuff than they were at the peak of 8 inch.

Old fabs which were crated up and sold off by the pound to be shipped off to China to make chips for toaster ovens and dish washers all of a sudden look more valuable and important.

We don’t think this is a one time blip in the industry that people will forget about. The auto industry certainly won’t forget any time soon. Other industry better figure it out or they too will suffer the same fate some day soon.

We think both chip companies and foundries should be able to parlay this into higher pricing and better margins for a more guaranteed pipeline of supply of key components.

We wonder if any auto companies or others will think about in-sourcing chip supply.

If we were Apple, run by a former supply chain guru, like Tim Cook, maybe we might get a bit nervous looking at the auto industry and knowing that all my eggs are in TSMC’s basket, especially now after the launch of the M1.

Maybe TSMC and Apple are in a “deadly embrace” that neither can exit from.

We think Apple and many others in the tech industry and beyond have to take a long hard look at their supply chain in the chip industry that has long been taken for granted and assumed would always be there for them.

The risks are in the Trillions and are existential for defense and intelligence of governments.

Even if the chip industry doesn’t go away on its own there’s always the risk of it being taken away by external forces….

You don’t know what you got till its gone…….

4 Replies to ““For Want of a Chip, the Auto Industry was Lost””