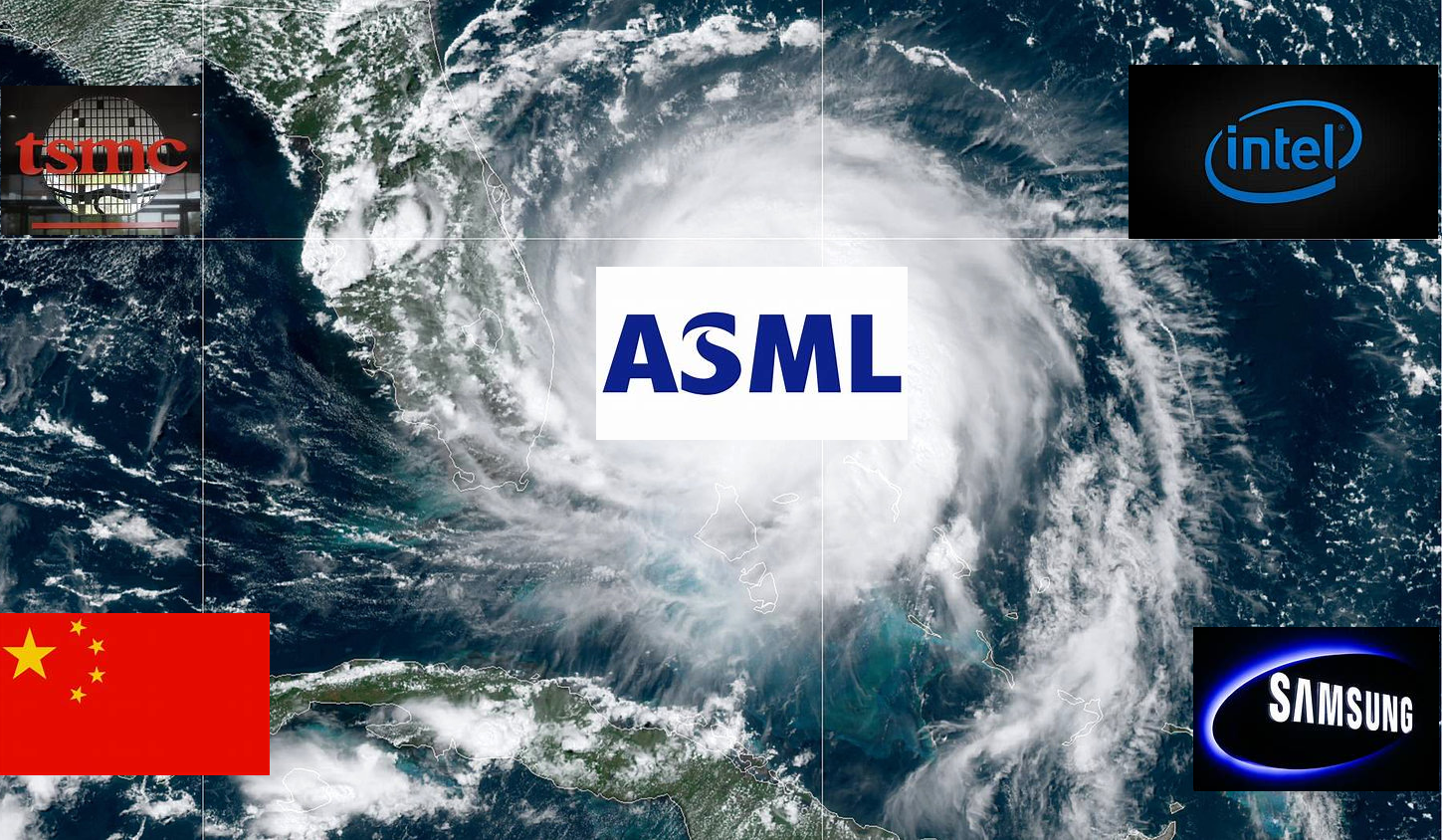 ASML is the key to Intel’s Resurrection Just like ASML helped TSMC beat Intel
by Robert Maire on 09-09-2021 at 6:00 am
View Profile
View Forum Posts

Intel is dependent upon ASML for its entire future
If Intel has any hope of recapturing the lead in the Moore’s Law race from TSMC then it desperately needs ASML’s help. Right now TSMC is miles ahead of Intel in EUV tool count and experience which is the key to advanced technology nodes. If both TSMC and Intel buy tools and technology at an equal rate, TSMC will stay ahead. The only other way for Intel to catch TSMC is for TSMC to fall on its own sword, much as Intel did, but we don’t see that happening any time soon.

Back when ASML was struggling with EUV, making slow progress on a questionable technology, they were looking for an early adopter to take the plunge and convince the industry that EUV was real.

At the time, Samsung, TSMC and Intel were not signed up to EUV and viewed it very suspiciously. Nobody was willing to be the first to commit to it.

TSMC had famously said they would never do EUV
Then Apple changed all that by telling TSMC it needed to do EUV, for better chip performance, and Apple would write a check for it.

ASML got into a room with TSMC management and cut a deal and TSMC went from an EUV non-believer to a full on convert virtually over night. TSMC went from “never EUV” to its biggest customer and user (financed by Apple)
The rest is history.

TSMC’s earlier adoption of EUV helped it pull ahead of both Intel and Samsung over the past few years, aided by Intel’s production problems.

Its likely that TSMC may have pulled ahead without EUV but EUV really allowed TSMC to accelerate away from Intel and Samsung and create a huge Moore’s Law lead that exists today.

There is another similar inflection point coming up in the industry today, its high-NA EUV, basically the second generation of EUV technology. Similar to the first round of EUV there is hesitation in the industry as chip makers are unsure of the need for high-NA or its advantages or even whether it will arrive in time to make a difference.

ASML needs another early adopter to push the industry along.
Indeed, the IMEC roadmap, which most in the industry seem to be following does not call out the need for high-NA EUV.

Obviously there was some behind the scenes discussion between ASML & Intel as Intel came out with a full throated support of high-NA EUV technology.
If ASML anoints Intel as the high-NA EUV champion in exchange for its commitment and Intel gets preferential access to tools over TSMC as its reward, that could be the difference to get Intel back in the Moore’s Law game ahead of TSMC.

Not a slam dunk
There is of course a lot of risk but then again Intel has to take the risk as it has little choice. Will high-NA work? Will it be demonstrably better than current EUV? Will it get here in time? Will it be enough of an advantage over TSMC?

If the answer to enough of these questions is yes then Intel could win big, if not Intel could remain in a trailing position and never catch TSMC.

Intel of course has to do a lot of other things right, such as new transistor design and vertically stacked transistors but little of that will matter if they can’t get back in the Moore’s Law game with leading edge litho.

Maybe Intel should go from “Investor” to “Investee”
Back in 2012 ASML was struggling with EUV and needed some financial help to complete the technology and show support of customers. Customers were also pushing hard for 450MM wafer tools and demanding DUV tools, so ASML had its hands full, much like Intel today. It needed help in the form of money.

All three companies made a killing in ASML stock as they sold after ASML’s stock ran up on EUV. Intel made enough to buy all the EUV tools it needed. Intel’s profits on its ASML investment helped prop up its weak performance.

It was a great deal for ASML and Intel, TSMC & Samsung, a true win/win which helped the industry adoption of EUV.

It would seem that now the shoe is on the other foot. ASML is on fire and Intel is in need of help. ASML has a 50% higher market cap than Intel.

Intel has a lot to do, a lot to prove and a lot of money to spend to recapture the lead in semiconductors. In short, Intel needs help.

Maybe ASML should invest in Intel much as Intel invested in ASML when the chips were down.

If ASML were to invest a similar amount in Intel, it would be enough cash to pay for both planned foundries in Arizona and then some. With enough left over for Intel to buy some expensive high-NA tools.

If it worked, as Intel’s investment in ASML did, ASML might make a killing in Intel’s stock as they regain their Mojo. Not to mention that ASML would get a great customer for high-NA.

This would certainly be better than a US government bailout of Intel’s self inflicted problems which would benefit investors rather than tapping taxpayers. Intel would certainly rather take the “free money” from the government.

Its a nice dream but we doubt that Samsung & TSMC would be happy with ASML investing in Intel.

The better, and somewhat logical solution, would be for Apple to write a check to Intel to be the sponsor for Intel’s high-NA EUV plans and Foundry projects in Arizona in return for first and guaranteed capacity to fab Apple’s chips at those fabs.

It would be great for Apple to have a second source that is US based rather than their total current reliance on TSMC in Taiwan (a short boat ride from the Chinese motherland). It would guarantee supply and keep pricing honest.

Apple certainly has the cash to support Intel as well as the need for another foundry source for leading edge as Samsung is clearly a “Frenemy” and not a great second source to TSMC.

Semiconductors remains very dynamic, global & highly interconnected
The linkage between chip makers and tool makers is much more than a customer supplier relationship. The semiconductor industry is a highly complex and dynamic industry of relationships that is ever changing with Intel going from the leader and “inventor” of Moore’s Law to struggling and ASML going from a distant third against Nikon and Canon to a monopolistic technology leader & powerhouse.

The Stocks
We still maintain that Intel has a very long road in front of it with no assurance of success and many challenges. We maintain that Intel will be a “work in progress” for a relatively long time, well beyond most everyone’s investment horizon.

ASML is in an enviable position given its technology dominance and demand for its product. This positive environment will not change any time soon. ASML’s stock is priced for perfection but then again its in a perfect position so its hard to argue.

The semiconductor “shortage” is clearly longer lasting than expected as paranoia in the industry runs deep and everyone continues to double and triple order and stock up on inventory in an industry used to Kan Ban and just in time delivery.

The stocks have clearly slowed over the last few months as investors are rightfully wary of the end of the current “super duper cycle”. It remains difficult to put new money to work at current valuations.