The semiconductor equipment market grew 37.3% in 2017 on the heels of capex spend by memory companies in order to increase bit capacity and move to more sophisticated products with smaller nanometer dimensions. Unfortunately these companies overspent resulting in excessive oversupply of memory chips. As memory prices started dropping, these companies put a halt to capex spend, and global equipment revenues increased only 13.9% in 2018. As excess inventory continues to increase in 2019, capex spend by these companies is projected to drop 29%, which will result in a significant reduction in equipment revenues in 2019.

As a result, the global semiconductor equipment market is forecast to drop 17% in 2019, reaching revenues of $64.5 billion, according to The Information Network’s report, “Global Semiconductor Equipment: Markets, Market Shares, Market Forecasts.”

Chart 2 illustrates the change in revenue YoY for the leading semiconductor equipment companies. As I said above, the overall market increased 13.9%, so Lam’s growth of 13.7% attributed to its 0.1 point loss in share. AMAT’s lackluster growth of only 1.1% in 2018 contributed to its loss of 1.6 share points. Growth was less than the composite growth of companies ranked 8 through 75. The company has been losing market share to competitors YoY for the past three years.

KLA-Tencor (KLAC) grew 26.1%. I noted in a January 31 Seeking Alpha article entitled “KLA-Tencor And Metrology/Inspection Peers Will Be Less Impacted By Memory Capex Cuts Than The Rest Of The Equipment Industry In 2019” that a shift to more inspection in the fab was underway. 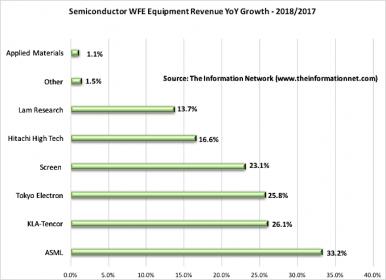 AMAT sells equipment for nearly all the processes used to make a semiconductor chip. Its two major segments are deposition and etch. In 2015-2017, deposition made up 46% of AMAT’s revenue, while etch made up 18-20% of revenues. These two sectors represent 2/3rd of the company’s revenues.

In 2018, the deposition market grew 3.9% and etch grew 4.4%. Since AMAT’s total revenues grew just 1.1%, it is obvious that the company lost shares in both sectors to competitors in these sectors, namely Lam Research, Tokyo Electron, and Hitachi High Technologies (OTC:HICTF).

2019 Analysis
Based on capex spend data as detailed in Table 1, The Information Network projects the semiconductor equipment market will drop 17% in 2019, compared to growth of 13.9% in 2018. 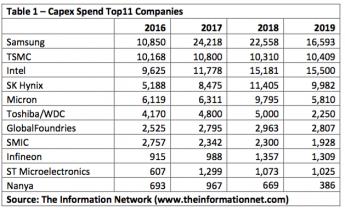 The main reason is the drop in capex spend by memory companies tied to the inventory overhang and oversupply of 3D NAND and DRAM chips. In total, capex spend is projected to drop 29.1% in 2019.

But there is another important factor investors need to consider: market share gains and losses. Why are market shares important?

Semiconductor manufacturers purchase equipment based on a “best of breed” strategy. Market share losses indicate equipment is not best of breed. When a customer decides to make additional equipment purchases to increase capacity, it will buy more from its current supplier. This means further market share gains.