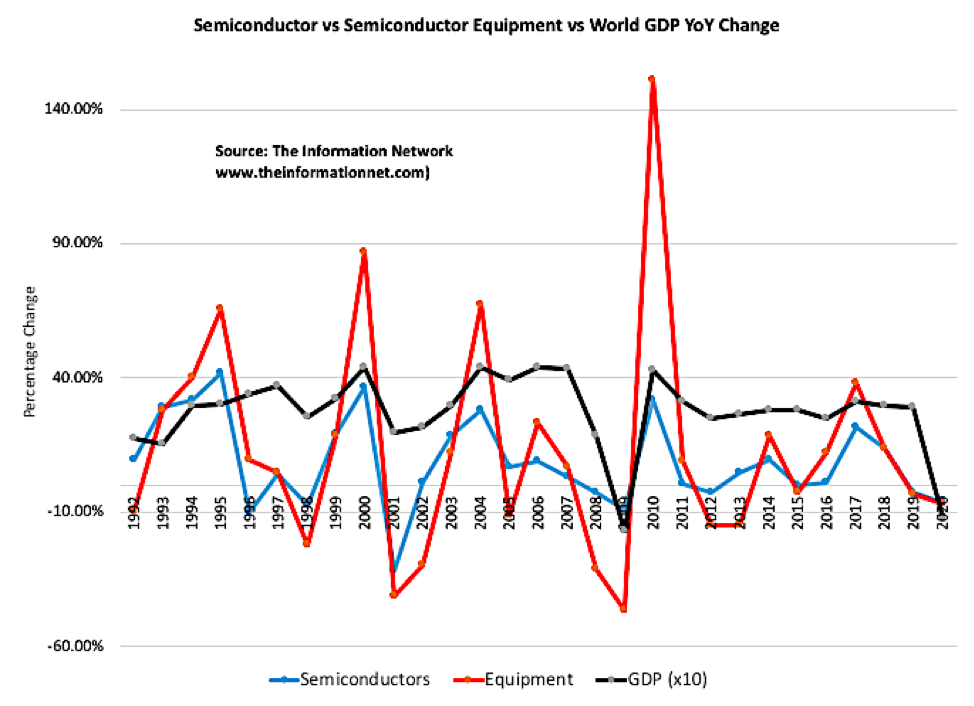 GDP (black line), which measures the value of economic activity within a country, is often a factor in halting the increases in semi and semicap revenues. GDP is important because it gives information about how an economy is performing. The growth rate of GDP is often used as an indicator of the general health of the economy.

Thus, if a country has healthy economy (upward slope of black line), we often see an upward slope in semi and semicap revenues. The converse is also true. If the economy is doing well, individuals have money to make purchases of products using chips – smartphones, cars, TVs, etc.

Besides the significant drop in GDP, there are other factors corroborating my forecast.

Drop in Capex Spending
Table 1 shows announced and estimated capex spending for the top five semiconductor manufacturers. There are three caveats readers must recognize. First, capex includes building as well as equipment. Second, capex is a variable expenditure, and the numbers planned at the beginning of the year are never the amount of actual spend. Third, Samsung’s (OTC:SSNLF) capex spend are for its memory and foundry. These five companies represent about 60-65% of total spend, so it is a good representation.

According to Table 1, expected capex spend for these top five companies will decrease 12.1% in 2020, according to The Information Network’s report entitled “Global Semiconductor Equipment: Markets, Market Shares, Market Forecasts.”

Drop in Semiconductors and Semiconductor Equipment
Table 2 compares GDP, semiconductor and semiconductor equipment revenues for 2008-2009 and 2019-2020. A striking observation in the comparison of the two crises is the similarity of YoY changes in the year up to and including the year that GDP dropped in 2009 and forecast to drop in 2020. That’s despite the difference in origins of the recession.

The Global Financial Crisis began in 2007 with a depreciation in the subprime mortgage market in the United States, and it developed into an international banking crisis with the collapse of the investment bank Lehman Brothers on September 15, 2008. The crisis was nonetheless followed by a global economic downturn. This coming recession in 2020 has to do with CORVID-16.

The University of Michigan’s consumer sentiment for the US was revised down to 89.1 in March of 2020 from a preliminary of 95.9 and 101 in February (Chart 2). It is the lowest reading since October of 2016 and the fourth largest one-month decline in nearly a half century.

ECRI’s Weekly Leading Index (WLI), is in free fall. According to ECRI, the nine-week drop in the WLI is more pronounced than anything it’s ever seen at this stage of a recession. Chart 3 shows WLI growth going back half a century. It looks like WLI growth has just fallen off a cliff, not having been this low since the immediate aftermath of the Lehman Brothers collapse in 2008. 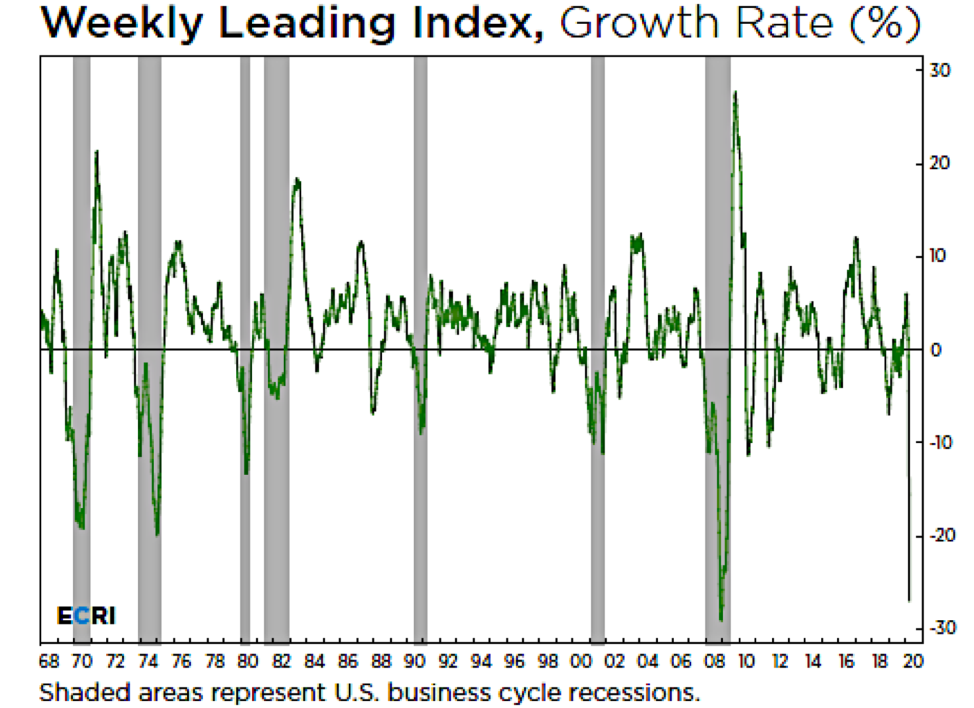 The impact of this drop in revenues will primarily impact processing equipment companies AMAT and LRCX. ASML is another processing company that currently does not see the impact of COVID-19 beyond Q, but the company announced in a press release on March 30 it could affect Q2. The company noted:

“Due to the uncertainties regarding COVID-19, ASML has decided not to execute any share buybacks in Q2 2020. This decision follows the pause in the execution of the program in the first quarter, after having already performed share buybacks under the new program for an amount of approximately €507 million.”

KLA’s metrology/inspection equipment is very different from processing equipment such as lithography, etch, or deposition sold by peers.

Once the pandemic is halted, large companies in the semiconductor and high-tech businesses should resume business as usual. Other large companies will be slower to recover, like airlines and hotels, as mentioned above. Small companies and mom and pop stores may never recover. Along with the elimination of their businesses goes their purchasing power – money that could be spent on smartphones, cars, and TVs.

2 Replies to “Why I’m Lowering Semiconductor Equipment Revenue Growth to -6.9% in 2020”