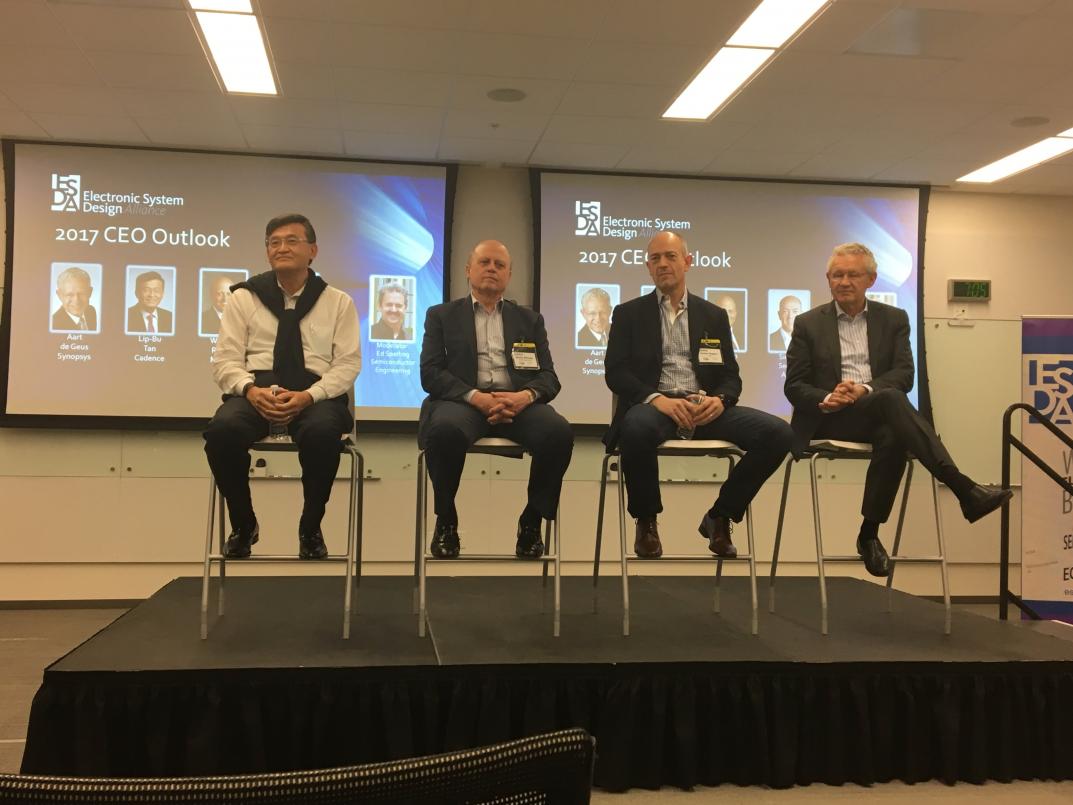 A long standing tradition has returned to EDA: The CEO Outlook sponsored by ESDA (formerly EDAC) which alone is worth the price of membership! Not only do you get a free meal, the event included quality networking time with the semiconductor elite. In the past, financial analysts moderated this event holding the CEO’s feet to the fire. Let’s hope that tradition returns next year because that is excellent content.

This year was especially interesting because two of the four CEOs sold their companies to much larger entities last year and you could tell because of the relaxed looks on their faces and less guarded responses to questions. There was also some interesting acquisition chatter that could be EDA disruptive and that was about Imagination Technologies and the Calibre unit of Mentor. Synopsys and Cadence both have unique opportunities here so it will be interesting to see who comes out on top.

Security was the most discussed topic of the night with ARM CEO Simon Segar, Synopsys CEO Aart de Gues, Cadence CEO Lip-Bu Tan, and Mentor Siemens CEO Wally Rhines all making some important points. Simon is not satisfied with security progress citing time to market as much more of a priority than shipping a secure product. ARM has invested heavily in security making it one of the three pillars of SoC design: Low power, high performance, and security. Aart noted that systems companies are asking chip companies for security guarantees which of course will not happen. To me this is even more reason for fabless systems companies to take control over their silicon as Apple has done. Aart also talked about “secure by construction” and the need for security regulation. Wally also talked about customers driving chip security and being willing to pay for it because today there is security technology that is not being fully utilized. Lip-Bu also talked about working with systems companies on being more willing and able to implement security in their chips.

Semiconductor IP was also discussed with Lip-Bu mentioning that IP outsourcing is growing which brings us to Imagination Technologies. As the story goes, Apple tried to buy Imagination last year but the perceived value, as a result of the ARM acquisition, was ridiculously high so Apple decided to develop their own GPU. Given that Apple is responsible for 48% of Imagination’s revenue their market value dropped more than 75%. Clearly Imagination Technologies will be a shell of the company they once were without Apple so to me an acquisition is imminent. Other than QCOM (for a patent play), my two leading candidates to acquire imagination are Cadence and Synopsys. Cadence has a new IP VP who needs to revitalize their IP business and has no overlap with Imagination products. Synopsys has overlap but they are the IP leader due to some very clever acquisitions. Both companies would benefit from helping Apple avoid any legal complications of developing their own GPU after being intimate with Imagination and even hiring some of their designers. Apple is a big EDA, IP, and emulation customer so a little Apple goodwill can generate a lot of revenue.

The other interesting conversation over beer and some very tasty food was the Mentor Calibre unit. From what I understand, verification is not essential to the Siemens corporate strategy and a bidding war between Synopsys and Cadence could result in a multi-billion dollar windfall.

Given those two ripe acquisition opportunities I see EDA as having another big year, absolutely.

You can see pictures and a video of the event here. It was an uncharacteristically wet and stormy night in Northern California so the people who attended, myself included, really wanted to be there.