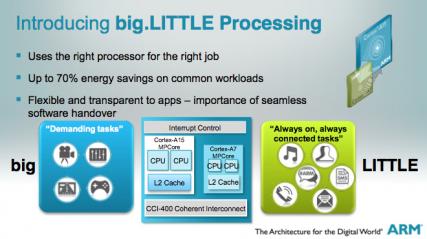 A client turned me on to a great new book, “The Age of the Platform” by Phil Simon. It’s about how Amazon, Apple, Facebook, and Google have radically transformed the landscape. For me, it’s not just social networking – it’s social computing, changing how things are designed.

I’m borrowing this right from Phil’s description of why he selected these four companies as the platforms at the center of this shift:

“1) They are rooted in equally powerful technologies—and their intelligent usage. In other words, they differ from traditional platforms in that they are not predicated on physical assets, land, and natural resources.

All these platforms are making this kind of impact in large part because they run on devices powered by one company: ARM. They match the above description, as a purveyor of intellectual property with virtual design and fabrication allies. ARM processors power social computing.

A vibrant ecosystem is an understatement, and it’s building smartphone and tablet momentum. Apple’s epic success, driven by dual Cortex-A9 cores in their A5 processor, is fueling a whole new set of changes driven by BYOD and consumer trends like mHealth and the “quantified self”. Qualcomm, about to set a new bar with their Krait implementation of the ARM instruction set, has taken a lead in smartphone processing innovation. NVIDIA and Freescale have gone quad Cortex-A9, with NVIDIA rumored to have taken the socket in the next-gen Amazon Kindle Fire. TI and ST-Ericsson are on dual Cortex-A15, with first silicon just seeing the light of day. Microsoft, having swung the Windows 8 machine in the direction of ARM, is part of the equation – and we’re about to find out more about that February 29th at Mobile World Congress.

The upper right of ARM’s “Gods and Giants” roadmap shows new 64-bit cores, Atlas and Apollo, targeting 20nm implementations of ARMv8 with an eye on growing into the server market. Here the ecosystem isn’t as thriving yet, with names like AppliedMicro and Calxeda at the front. Crossing Intel’s Sandy Bridge in that direction may prove just as difficult as Intel coming across toward the smartphone side.

Where things are thriving is the center of the roadmap, for smartphones and tablets. They tipped their highly efficient Cortex-A7 core last fall, and is now looking deeply at a “big-little” processing approach where the A7 does all but the biggest tasks, with a Cortex-A15 dozing patiently until needed for brief heavy lifting. They’ve hinted at a similar big-little approach with two new graphics cores, Skrymir and Tyr, with few details so far. It seems they are looking at smooth, dynamic shifting between cores sized for the task instead of simply tossing more cores into the mix. It’s all about the 1W.

What do you think of the state of social computing, the idea of these as the new platforms, the contrast between ARM and Intel, and what’s on the horizon from ARM?