Synopsis: India could learn from both countries, requiring that Facebook India be sold to one of India’s tech tycoons. This would be one step to ensuring that all data be kept locally and tightly protected, and that the algorithms that determine the information that users will receive – which, after all, influences their behaviour… Read More

I’m going to get to low power and RISC-V, but first I’m trying out virtual DAC this year. Seems to be working smoothly, aside from some glitches in registration. But maybe that’s just me – I switched email addresses in the middle of the process. Some sessions are live, many pre-recorded, not quite the same interactive experience… Read More

Casual observers of the automobile industry are quick to compare connected cars to “smartphones on wheels.” It’s a simple way of looking at things that makes some sense now that half of all cars produced in the world are made with a built-in cellular modem…or two. It belies the complexity of connecting… Read More

As a professional semiconductor event attendee I can pretty much tell if an event will be successful by looking at the agenda. What I look for is simple, customer presentations. Not company presentations or partner presentations but actual customer case studies presented by name brand companies. For this event Google, Intel,… Read More

Google’s Head of Android Auto Partnerships, Jens Bussman, joined me on stage last week in Munich at TU-Auto Europe to discuss Google’s progress and priorities in the global connected car market. The standing-room-only audience was treated to an overview of Google’s plans and some clarifications regarding its different assets… Read More 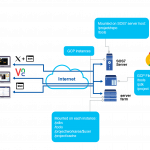 When EDA users first started considering using cloud services from Google, Amazon, Microsoft, and others, their initial focus was getting access for specific design functions, such as long logic or circuit simulation runs or long DRC runs, not necessarily for their entire design flow. If you choose to use the cloud this way, you… Read More