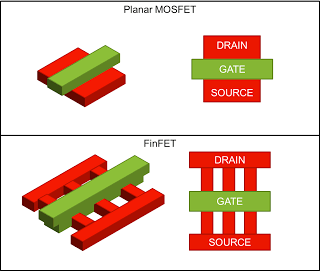 Analog and mixed signal design has received more than their fair share of attention since the mobile revolution and now that FinFETs are in production at the foundries I see that trend continuing. As a result this year there are some interesting things brewing in EDA, especially in the area of Custom Layout.

Innovation in Custom Layout has been nowhere near as rapid as in other areas of EDA. Over the years the custom tools have been tweaked and tuned with a new feature here and there to enable the layout engineers to be as productive as possible while the industry sailed along with the tide of shrinking process nodes. But the waters are getting choppy. Driven by the new challenges that the latest process nodes are bringing, especially FinFET and multi-patterning, it appears that it’s time for Custom Layout to undergo a much needed disruption.

That’s clearly the thinking over at Synopsys where Graham Etchells believes it’s time for Custom Layout to get into the 21st century. Graham is an EDA veteran with over 38 years in ‘the business’ and his involvement with custom layout stretches back to the late 1970’s with the introduction of the Calma GDS 1 systems. He has some interesting insights as to what’s really needed to address this new wave of challenges and has taken to blogging to crowdsource new ideas and approaches.

Graham’s new blog “Custom Layout Insights” starts with a three part series called “We have come a long way” which is a very good read. It has always been my conviction that you must know how you got to where you are today to better decide where to go tomorrow. He starts this series in the late 1970’s with the first Calma GDS systems which was before my time. I didn’t arrive in Silicon Valley until the early 1980’s where the Calma GDS-II system was the defacto IC design standard. In fact, that is where term GDSII came from. That is also where the term tape-out came from since we used to stream the GDSII out to magnetic tapes when the design was finished.

Last week Graham started another series “Hurricane FinFET – part 1.” which is a nice introduction to FinFET custom layout. Hopefully this is a 100 part series because there is a lot of ground to cover. And who better to cover it than the top EDA/IP company with leading edge FinFET IP in production all over the world? And yes all Synopsys IP designers use Synopsys tools including their more than 400 layout people. I know this by experience from the Virage acquisition. All of our engineers were told that they had to switch from Cadence to Synopsys tools in 30 days without schedule delays. Imagine the horror! Not only did the Virage people do it, they love using their own tools and the custom development and support that come with it, absolutely.

About Graham Etchells
I started in EDA before it was termed EDA. It was simply Computer-Aided Design back in 1977. I was working at GEC Traction in Manchester England (yes, I am a Brit) doing control gear for locomotives. It was all heavy duty relays and contactors back in those days. Then came the electronics revolution and with it came the first CAD system. It was a CALMA GDS1 system with green vector refresh displays and huge digitizers for entering the data. It was amazing what you could do with a Data General Eclipse computer and 16K (yes, Kilobytes) of core memory! Pretty soon I was running the CAD system, which at the time was one of the largest in Europe, if not the world. CALMA was expanding and I was recruited as an applications engineer. That was it; I was in EDA and have been ever since. I have held marketing and sales positions at Silvar Lisco and Neolinear and I have been chasing the holy grail of analog/custom layout automation ever since I ran marketing for Virtuoso at Cadence back in 1995. Past experience tells me we may never find the Holy Grail, but there is light at the end of the tunnel. Follow this blog and see how we at Synopsys are progressing.

0 Replies to “Synopsys on the Future of Custom Layout!”