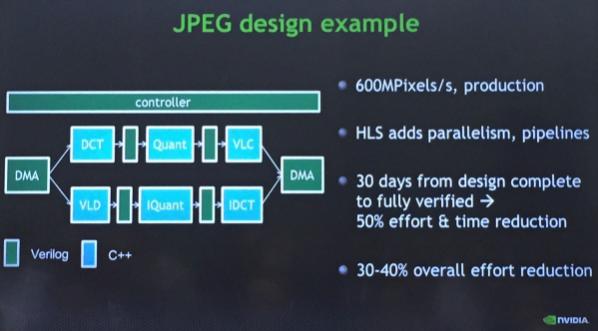 High level synthesis (HLS) seems to have been part of the backdrop of design automation for so long that it seems to be one of those things that nobody notices any more. But it has also crept up on people and gone from interesting technology to keep an eye on to getting genuine adoption. The first commercial product in the space was behavioral compiler introduced in 1994 by Synopsys. In that era we all thought that design would inevitably move up from RTL to C, but in fact IP came along as the dominant methodology, with IP blocks largely designed in RTL (if they were digital anyway) and then assembled into SoCs.

I attended a presentation at the Calypto theatre by Frans Sijstermans of Nvidia about How HLS Saved Our Skin…Twice. Nvidia were facing the problem that designs were growing at 1.4X per generation but design capacity only at 1.2X causing problem. In 2013 the video team faced a new chip with all sorts of new technologies on the must-have list: HEVC, VP9, deep color, 4K resolution and more. An analysis showed that using their old methodology would take 14 months but only 9 months were available. Google had been using HLS successfully for video and talking publicly about it so Nvidia contacted them and then they decided to use HLS to pull in the schedule.

So the first time their skin was saved was getting the design on-track for an RTL freeze in March 2014, using 8 bit color. Then in January 2014 was the consumer electronics show (CES). Lots of people were showing HEVC but with 10 bit color. They realized that the project had no future, they had guessed wrong about market requirements. “We messed up,” the head of the division admitted. Without HLS there was absolutely no way to fix this since it affected every register and operator of every datapath in the entire design.

They recoded the C++ for 10 bit instead of 8. They ran it through HLS. All the pipeline stages changed due to the different performance. But would it work? How could they verify it? They worked out that to run the 100,000 tests the HEVC standard provided at the RTL level would take 1000 cores for 3 months. Instead they did all the verification running all the tests at the C++ level. It took a single CPU 3 days. Of course they still ran a bunch of tests at the RTL level, just to be safe. They taped out the two versions, a 20nm block for mobile at 510MHz and a 28HP discrete GPU at 800MHz.

0 Replies to “High Level Synthesis. Are We There Yet?”