Custom AI acceleration continues to gather steam. In the cloud, Alibaba has launched its own custom accelerator, following Amazon and Google. Facebook is in the game too and Microsoft has a significant stake in Graphcore. Intel/Mobileye have a strong lock on edge AI in cars and wireless infrastructure builders are adding AI capabilities… Read More

No-one could accuse Badru Agarwala, GM of the Mentor/Siemens Calypto Division, of being tentative about high-level synthesis. (HLS). Then again, he and a few others around the industry have been selling this story for quite a while, apparently to a small and not always attentive audience. But times seem to be changing. I’ve written… Read More 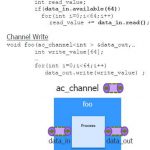 Math geeks know all about Inverse Discrete Cosine Transforms (IDCT) and a popular use is in the hardware architecture of High Efficiency Video Coding (HEVC), also known as H.265, the new video compression standard and widely used in consumer and industrial video devices. You could go about hand-coding RTL to create an IDCT function,… Read More