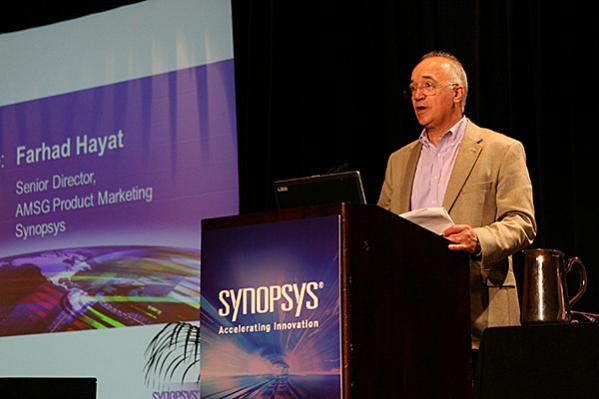 Last year at DAC we didn’t really know the circuit simulation roadmap for Synopsys because of all the EDA company acquisitions, however this year it’s clear to me that:

Synopsys had five customers talk about their actual AMS design and simulation experiences, which was more interesting than having product marketing speak. 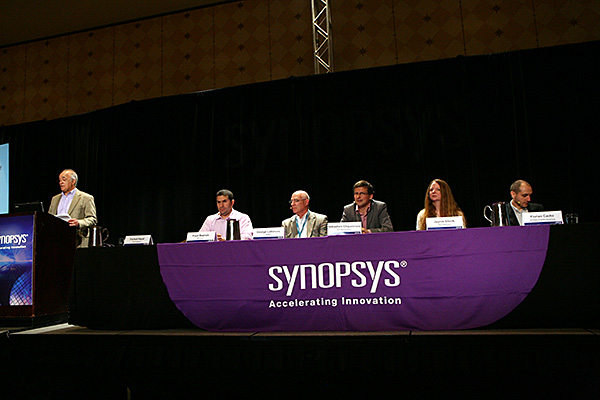 – overview of the Power Delivery Network with on-chip die model for DRAM modules like DDR3, DDR4, etc. Voltage regulator used for a multi-layer PCB. Modeling the entire VCC from regulator to PCB to component, to package, to the circuit. Model the PDN as a schematic, then do layout and extract the SPF with actual parasitics. How much VCC is lost going from the regulator to the transistors in the memory? Created a 3D plot of VCC loss across the system, shows good correlation between schematic and actual in both DC and AC modes. Can replace the entire system with an equivalent RC model.
– Used both HSPICE and FineSim to simulate currents and voltages across the entire PDN. Analysis allows optimization to take place and VCC optimization.
– All the impedances are frequency dependent for Board, Package and Chip. Adding decoupling capacitances manages effects of VCC loss. Resonance can be minimized. ESR effects on resonance can be simulated then optimized.

George Lattimore, ARM
FinFET memory IP design with FineSim.
Director of Engineering for Physical IP division, in Austin they do both std cell and memory compilers and IO.

– Used FineSim to simulate these compilers. Samsung, TSMC, GF and IBM all have FinFET processes.

– FinFET netlists are 3-5x larger because of parasitic RC elements. About 3-10X runtime increase because of modeling. 2-3X increase in RAM to simulate a circuit.
– FineSim uses a Table model to reduce RAM and runtimes, about 7.2 to 2.0X speedup.

– PowerBlock detection in FineSim to improve run time and reduce RAM requirements.
– Over the past 5 quarters FineSIM was used on 20nm designs and the average runtime has improved 45%.
– RAM usage improved 25 to 35% improvement.
– Accuracy compared to SPICE within 3%.

Improvements confirmed with both 14nm and 20nm nodes.
– Run times went from 3 days to 1/3 day over a 5 quarter period.
14nm simulation runs about as fast as 20nm netlists using FineSim improvements. 14nm is alpha-level models right now, no full IC layout yet.

Jaynie Shorb, Broadcom
Principal Design Engineer.
memory characterization flow using FineSim. The design CAM as a compiler.
They design std cell, memory and IO cells.
CAM memory compiler was developed at Broadcom, uses a simple GUI for users to create what they need in hours or days. 128 bits to 2Mbits, 2 to 256 bits per word. The GUI has a web interface, then estimates PPA metrics within 20% of final result.
– Memory layout created in Skill code.
– the parastics are extracted with Star RCXT. OA is the database.
– This large extracted netlist gets reduced, then simulated in FineSim, SPICE mode. The timing and power numbers go into model generation.
– Lots of SPICE simulations to create the compiler, both FineSim Pro mode simulation, and Monte Carlo.
– Post layout simulations used for characterization with a reduced RC netlist,simulate with FineSim Pro.
– SImulations done for both dynamic and leakage power using FineSim Spice mode.
– Have to simulate all of the modes: standby, split rail, pwer down.

Florian Cacho, STMicroelectronics
Aging Model implementation using MOS reliability API from HSPICE to CustomSim.
– So sorry, had a 1:00PM appointment and this luncheon was running long on time, so I had to miss this customer presentation.

Summary
Synopsys has plenty of circuit simulator products and at least we know which ones are alive and dead in 2013. It would make sense to me if HSPICE and FineSim merged together sometime in the future because they have much feature overlap. The need for speed without losing accuracy is a never-ending competition with circuit simulators and Synopsys looks to be holding their own, for the moment. 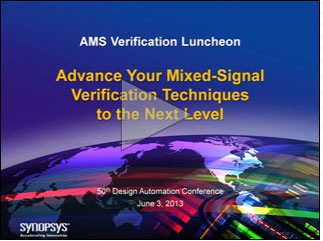