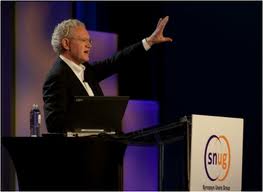 If I had a nickel for every time I heard the term “FinFET” at the 2013 SNUG (Synopsys User Group) Conference I could buy a dozen Venti Carmel Frappuccinos at Starbucks (my daughter’s favorite treat). In the keynote, Aart de Geus said FinFET 14 times and posed the question: Will FinFETs Yield at 14nm? So that was my mission, ask everybody I see if FinFETs will yield at 14nm.

Given that Synopsys owns the TCAD market, Aart certainly knows what is yielding and where. Ever the businessman, Aart then segued into a pitch for the Synopsys Yield Explorer product which is a staple at 20nm. At the Press event following the keynote Aart mentioned lithography challenges and doping. In the hallway Co-CEO Chi-Foon Chan mentioned parasitic extraction challenges and process variation was mentioned multiple times by some of the 3,000 or so attendees. No real consensus could be had because in the words of one conference attendee, “We just don’t know what we don’t know.” Hard to argue with that. An Intel person also told me over lunch that yielding 3D transistors at 14nm will be a new challenge, even after successfully yielding at 22nm.

Aart mentioned “The Exponential Age” during his keynote and talked a bit about Moore’s Law and how semiconductor manufacturing improves exponentially with time. Afterwards a hallway discussion included Wright’s Law of Experience or “We learn by doing” which seems much more applicable in regards to semiconductor yield. A quick search on my pocket supercomputer (iPhone5) brought me to a paper published in 2010 out of the Santa Fe Institute: “Statistical Basis for Predicting Technology Progress” which tests the hypotheses of Moore’s, Wright’s, and four other laws amongst 62 different technologies including transistors. Spoiler alert: Wright’s Law wins but Moore’s Law is a close second!

Circling back around to the original question “Will 14nm Yield?” you really have to take a close look at 20nm since 14nm is really just a 20nm process with FinFET transistors. According to an FPGA and two Mobile SoC companies that I know and love, 20nm is currently yielding “as expected”. So I would have to say yes, 14nm FinFETs will have a reasonably quick yield ramp since most of the problems will be vetted in 20nm. The next question of course is: Who will be first with 14nm production silicon? This is probably one of the most interesting races in the history of the fabless semiconductor ecosystem. If you allow handicapping and buy into Wright’s Law it will be TSMC, absolutely.

Don’t forget to register for FinFET day at the Electronic Design Process Symposium on April 19th. There will be technical presentations from TSMC, GLOBALFOUNDRIES, ARM, Synopsys IP, and Oracle plus an opening keynote from me on the Planar versus FinFET value proposition. I hope to see you there!