The need for full wave EM solvers has been creeping into digital design for some time. Higher operating frequencies – like those found in 112G links, lower noise margins – caused by multi level signaling such as in PAM-4, and increasing design complexity – as seen in RDL structures, interposers, advanced connector and long reach connections, all call for EM analysis. Existing EM solvers are extremely difficult to set up and have runtimes and memory requirements that increase exponentially as design complexity increases.

Designers have resorted to partitioning and simplifying designs so that they become manageable for solver runs. However, partitioning the designs to make it feasible to run EM solvers leaves important interactions out of the analysis. This means that EM solver performance and capacity issues are limiting their widespread use.

Cadence has just announced a new product called Clarity that looks as though it can address the EM simulation requirements of today’s complex high speed systems. Clarity is the first product from Cadence’s new System Analysis Group. Front and center in their announcement is an example of a 112G interconnect. Clarity can digest whole each of the complex elements in such as system.

At each end of the 112G data link is the redistribution layer (RDL) of thick metal carrying the signal to package connections. While RDL is relatively planar, it’s wide and thick metal calls for a full 3D solver. Packages contain balls, bumps. vias and complex routing, which are also difficult for many solvers. Likewise, PCBs have many layers with vias, pad stacks and other 3D elements. Connectors, cables and backplanes all have become complex and are subject to high frequency electromagnetic effects.

This new solver from Cadence boasts much higher capacity and performance. They have added a parallel execution capability that allows it to use large arrays of distributed processors and it also has support for HPC. Typically, designers were frustrated with existing solvers because the analysis problem would simply become to large to run on any machine. Cadence says that the Clarity solver can scale up to handle larger designs with virtually no limits. They cite its ability to use hundreds of processors in parallel.

On the performance side, Cadence points to two different test cases where scaling the number of processors improved runtime by over 10X. The first case is a 112G connector-PCB interface, where they scaled from 40 CPUs to 320. They saw a 12.3X improvement in runtime. Though this is a large number of CPUs, it speaks to the parallelism they are promoting. The second case is a DDR4 interface. In going from 40 to 320 processors, they see a 10.4X improvement in runtime.

Cadence says that Clarity can easily be used as part of an optimization flow, to help solve difficult design challenges. Clarity is integrated with the Sigrity 3D Workbench, making it much more than just an analysis point tool.

Their announcement includes endorsements from Teradyne and HiSilicon. From the comments those companies have made, it is clear that the performance and capacity improvements are meaningful. It seems that a tool like Clarity is the departure point for much more comprehensive EM analysis in a wide variety of systems. EM effects, by their very nature, are spread across multiple elements in a system. One simulation result Cadence showed was of a set of boards with flexible flat ribbon cables folded over and placed in a compact housing. 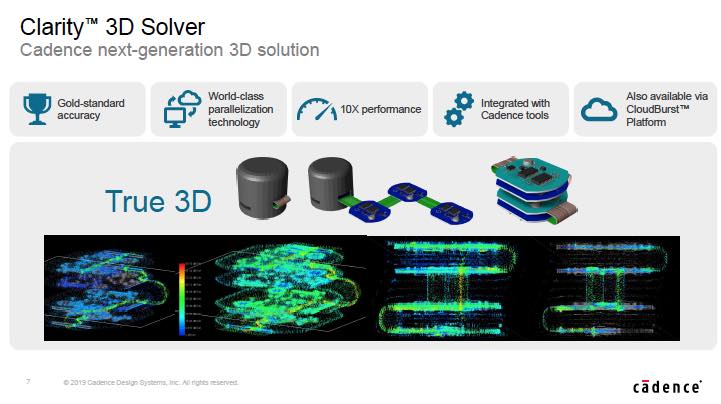 New designs running at what was once considered exotic mm-wave frequencies are becoming essential for new products that meet the demanding requirements for data centers, automotive, communications and other key areas. EM solvers are moving from being a niche tool to one that is going to be required frequently to build these complex products. In many ways, up until now the major players in EDA have left EM solvers to smaller point tool vendors. The announcement of their new Clarity solver should be seen as a sign that this is changing and that solvers are now considered a key enabling technology. Cadence seems to have made good use of their significant development resources to make major improvements in a very complex product area.