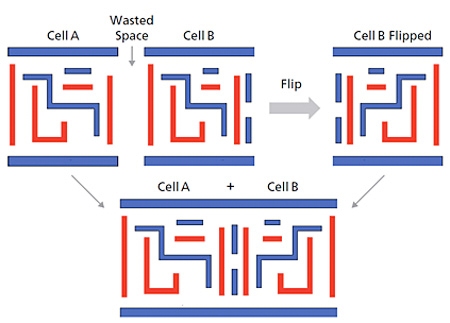 Every process node these days has a new “gotcha” that designers need to be aware of. In some ways this has always been the case but the changes used to be gradual. But now each process node has something discontinuously different. At 20nm the big change is double patterning. At 14/16nm it is FinFET.

Rahul Deokar and John Stabenow of Cadence and Jason Chen from TSMC will present, “20nm Design Methodology: A Completely Validated Solution for Designing to the TSMC 20nm Process Using Cadence Encounter, Virtuoso, and Signoff tools.” Well, I think my title gets to the point a bit quicker!

Double patterning has been forced on us by limitations in lithography. We still use 193nm light even though we are now drawing features that are 20nm (actually there isn’t really anything on a 20nm chip that measures 20nm). If we try and draw all the polygons on the lower layers of the process, the features are too close to print correctly. So instead we have to separate them onto two separate masks, so the polygons in effect alternate. Not all layout can be split in this way, which is usually called coloring since it is basically a graph-coloring algorithm, so routers and designers need to be careful not to create uncolorable layout.

Sometimes, even (say for analog), the designer wants to color the polygons manually. Why would they do that? At this process node, the two masks are not self-aligning. They are aligned by the vestigials on the wafer that the stepper detects, just like any other mask (actually reticle) but the two polygon layers have some slop in their alignment. This means that there is much tighter control of parasitics between polygons on the same mask (which are automatically self-aligning) and different masks (which are not).

There are self-aligned double patterning techniques. They use a sacrificial spacer (where both sides of the spacer eventually get whatever is being created on that layer) but they are more expensive. If you want to get a few chapters ahead, we will need to use these approaches to build transistors at the 10nm node (and maybe the lower levels of interconnect) but at 20nm we are not. I’m not sure about 16nm.

The layout rules for 20nm are very much more restrictive, even without worrying about double patterning. There is a lot less flexibility about what can go where, and weird features like dummy gates that we started to see at 28nm (where an extra poly is required on the end of a gate that is not electrically significant, to ensue that the gate prints and behaves correctly). We also have layout dependent effects (LDE) where the transistor circuit level performance depends on how close the transistor is to other features on the die, especially well boundaries. And even design rules that depend on electrical details. There is also local interconnect that appears between the transistors and the lowest level of true metal, with all its own rules.

A little more detail on what you will learn:

The webinar is being given twice on May 23rd at 9am Pacific (early evening in Europe) and at 6.30pm Pacific (morning in Asia). Details here. Registration here.