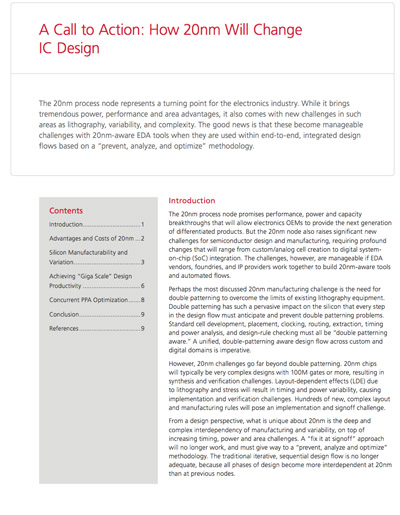 Cadence has a new white paper out about the changes in IC design that are coming at 20nm. One thing is very clear: 20nm is not simply “more of the same”. All design, from basic standard cells up to huge SoCs has several new challenges to go along with all the old ones that we had at 45nm and 28nm.

I should emphasize that the paper is really about the problems of 20nm design and not a sales pitch for Cadence. I could be wrong but I don’t think it mentions a single Cadence tool. You don’t need to be a Cadence customer to profit from reading it.

The biggest change, and the one that everyone has heard the most about, is double patterning. This means that for those layers that are double patterned (the fine pitch ones) two masks are required. Half the polygons on the layer go on one mask and the other half on the other mask. The challenge is that no patterns on either mask can be too close, and so during design the tools need to ensure that it is always possible to divide the polygons into two sets (so, for example, you can never have three polygons that are minimum distance from each other at any point, since there is no way to split them legally into two). Since this is algorithmically a graph-coloring problem this is often referred to as coloring the polygons.

Place and route obviously needs to be double pattern aware and not create routing structures that are not manufacturable. Less obvious is that even if standard cells are double pattern legal, when they are placed next to each other they may cause issues between polygons internal to the cells.

Some layers at 20nm will require 3 masks, two to lay down the double patterned grid and then a third “cut mask” to split up some of the patterns in a way that wouldn’t have been possible to manufacture otherwise.

Another issue with double patterning is that most patterning is not self-aligned, meaning that there is variation between polygons on the two masks that is greater than the variation between two polygons on the same mask (which are self-aligned by definition). This means that verification tools need to be aware of the patterning and, in some cases, designers need to be given tools to assign polygons to masks where it is important that they end up on the same mask.

Design rules at 20nm are incredibly complicated. Cadence reckon that of 5,000 design rules only 30-40 are for double patterning. There are layout direction orientation rules, and even voltage dependent design rules. Early experience of people I’ve talked to is that the design rule are now beyond human comprehension and you need to have the DRC running essentially continuously while doing layout.

The other big issue with 20nm are layout dependent effects (LDEs). The peformance of a transistor or a gate no longer depends just on its layout in isolation but also on what is near it. Almost every line on the layout such as the edge of a well has some non local effect on the silicon causing performance changes in active areas nearby. At 20nm the performance can vary by as much as 30% depending on the layout context.

A major cause of LDEs is mechanical stress. Traditionally this was addressed by guardbanding critical paths but at 20nm this will cause too much performance loss and instead all physical design and analysis tools will need to be LDE aware.

Of course in addition to these two big new issues (double patterning, LDEs) there are all the old issues that just get worse, whether design complexity, clock tree synthesis and so on.