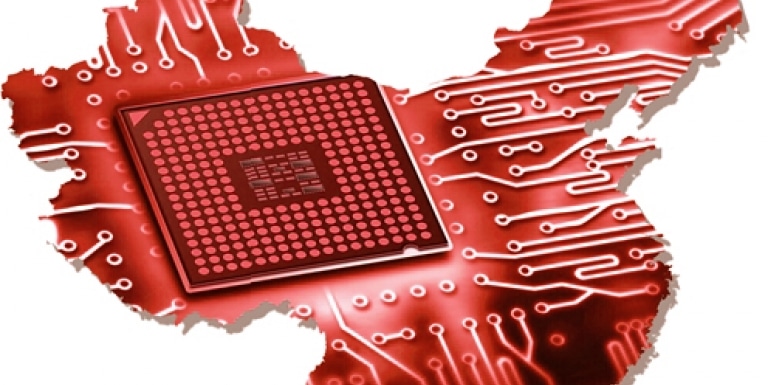 Many of the semi stocks we cover were down anywhere from 3% to 5% or more on Monday and had a partial bounce back on Tuesday. There is likely more downside beyond that as details of China’s retaliation come out. If the US goes tit for tat and retaliates to the retaliation its going to be a longer drop.

Chips are much more exposed than average company
We think today’s stock action was more or less a knee jerk reaction without a lot of analysis on specific names. As investors and analysts do the math, the impact on chip companies will be more than this initial reaction.

What is very difficult to calculate is the derivative impact from the many trade related issues of up stream companies from the semiconductor industry. Given that chips are used in many many applications and China is the biggest consumer of chips with many of those bound for re-export to the US, there is a lot of derivative impact.

The iPhone supply chain example
Iphones are in the cross hairs of the trade dispute given that they are made in China. It sounds like they may not escape the tariffs no matter how much the administration talks about “Tim Apple”.

The iPhone is the pinnacle of the semiconductor industry as it is driving the leading edge of Moore’s Law at TSMC which is currently the technology leader in the industry. Intel and PCs are far from the driver.

Apple has also been the biggest driver of TSMC’s conversion to EUV due to Apple’s demands and competition from Samsung. The iPhone also sucks up a huge amount of NAND memory in an industry already oversupplied despite 256GB Iphones.

Obviously all the CPU, GPU, comms chips and support chips in an iPhone add up to roughly $150 worth of chips alone in the bill of materials. Multiply that by 200 million phones a year and you get roughly $30B out of a $400B chip industry (at least).

There is zero chance of Apple moving production out of China in the next 5 to 10 years so iPhones are hostage in the trade war.

A tax not a tariff
If we assume a $1000 iPhone has a 25% “tariff” placed on it, it likely becomes a more expensive iPhone perhaps close to a $1250 iPhone. Foxconn, Apple’s manufacturer in China lives on relatively small gross margins which don’t allow it to absorb the impact of a tariff. Apple, is very concerned about anything that will hurt its margins and profitability and has already become the high end smart phone product in the market. This suggests that Apple will not absorb much of the price increase either.

The majority of the price increase will be passed on to US consumers as higher prices for iPhones. This means that Apple’s competitors, like Samsung and LG will have an even bigger price advantage as they can compete with phones made in Korea, Vietnam or elsewhere. This means that Apple will likely lose even more share to Samsung and LG (and others) in the phone market as Apple’s products will be less price competitive.

Obviously this will have the impact of less phones being sold by a US company (Apple) and more being sold by foreign competition (just not the Chinese).

So at the end of the day it becomes a “tax” on US consumers leading to less product sold by a US company with more product going to foreign competition.

Trickle down to chips and further down to chip equipment
The effect will be more like a bowling ball rolling downhill rather than a soft trickle down effect. It is highly likely that the trade war will only strengthen China’s resolve for “made in China 2025” to get out from under the US’s dominance. China could easily take a very hard line and push from the government on down to make Chinese companies use any other chips than US chips and any other equipment than US equipment.

If the Chinese didn’t get the message with ZTE, and then with Jinhua, they certainly are getting the message loud and clear now.

We think the response will be for China to double down on its “made in China 2025”. Perhaps financially helping out its chip industry even more. Buying semi equipment tools outside the US and developing more tools in China. If anything, IP could be more at risk as China needs to accelerate its independence through what ever means necessary. We don’t see China “knuckling under” in the trade war.

Downcycle lengthened?
The current chip downcycle which many were hoping might start to ease in the second half of 2019 will clearly take much longer to recover with a raging trade war. The downturn would clearly last well into 2020 and perhaps well beyond that.

When the recovery happens, the upturn will be more muted and we could see other countries, not involved in the war, benefiting and recovering first. Korea would likely gain share in both chips and equipment as would Japan.

The stocks
What we saw in the stock market on Monday and Tuesday was no more than headline risk and reaction. The downturn and partial rebound in stock prices was not based on new calculations of P/E ratios or P/S ratios calculated on lower levels of business due to the trade war. It will take several quarters of results to figure out how bad the impact would be.

We could start to see the negative impact in the June quarter with companies missing their current forecasts that they just made at the end of the March quarter as shipments get held up or stopped. Its likely that business would slow until the “tariffs” are sorted out.

There also may have been some “channel stuffing” in those sectors that could ship in front of the tariff imposition to get product across borders before tariffs changed. This could also cause a weaker June quarter. One of the main issues is that we just don’t yet know. Even if China and the US cease hostilities and bang out a deal ASAP, we will still see significant impact in the June quarter.

Right now, both sides appear to still be in escalation mode so the hopes for a resolution prior to the end of June seem weak at best. We don’t think the last two days stock action is a good predictor of where we are going, we still think the downside risk is higher than the upside risk. So far this assumption has been right given the turn of events.

A general position in the semiconductor industry may be to be long non US chip industry players such as Korea, Japan and others and generally short US chip industry especially those with high China exposure.