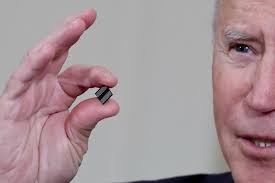 -The semiconductor industry is not to blame its the customers
-How do you fix something that’s not really broken?
-Long taken for granted, semi’s are sexy again
-Pawns in a Political Power Play?

Its not the chip makers that screwed up. It’s the customers that stressed the system beyond breaking

The semiconductor industry has been humming along for a very long time. Churning out billions and trillions of chips that go into every imaginable device and then some. There has always been more than enough to go around as evidenced by the fact that the industry goes through regular cyclical patterns based on over and under supply that put the industry through the ringer but the customer never experiences the ups and downs…they always got the chips they wanted…until 2020.

The industry has always had enough built in resiliency to deal with seasonal/annual and cyclical demand patterns. Sure prices vary and lead times have stretched at times but not like we have recently scene.

Did the semiconductor industry that has been doing its thing for 50+ years suddenly go stupid? No

We saw orders for chips drop off a cliff at the beginning of last year due to Covid which had a much more rapid negative impact on global trade than any prior economic downturn which the chip industry has weathered in the past. It is a combination of the rapidity and completeness of the shut down that hurt the industry beyond its ability to cope.

When the world started to recover demand picked back up just as fast as it slowed and the chip industry just couldn’t respond that rapidly.

Few outside the industry understand just how long, how complex and how much planning goes into making chips…and not just the most advanced chips, the stupid, mundane chips as well

Yes, secular demand has increased but not enough to cause the dislocation

Many will point to 5G, work at home, IOT, the cloud, AI and a myriad of other demand drivers and say that it just overwhelmed the chip industry.
While there are a lot of new applications for chips its not the primary root cause of the shortage but rather a contributory factor.

These applications have been growing over a span of years and over a long enough period of time for the chip industry to react if that were the only variable.

Its not like there is a shortage of fabs, or that existing fabs burned down or were lost

Old fabs never die….they just move to lower labor cost regions and get reused for making cheaper chips. China has been both building more fabs than the rest of the world combined as well as moving older fabs into the country for trailing edge capacity.

A few years ago, old fab equipment could be bought for scrap value of pennies on the dollar as there wasn’t nearly enough demand for older technology to make it worth the while to keep them in service.

Companies were virtually giving away old chip fabs that were no longer economically viable to get them off their books.

A few smart operators, such as Tower Jazz, very smartly picked up a significant number of these old fabs that even came with supply agreements, for little cost especially when compared to the original value of the equipment.
These fabs are still around turning out more chips than ever so its not like a lot of capacity has come off line.

Its all about utilization

Given that fab economics are all about maintaining a high utilization rate of a highly capital intensive asset, a fab full of tools, the goal is to find a way to keep them as close to 100% as long as possible to maximize profitability.

Many years ago, over 25, when we were first covering the industry there seemed to be a simple rule of thumb for running a fab. If you were over 60 or 70% utilization you were making money. 80 to 90% utilization was a sweet spot where profitability was good and lead times to customers kept them happy. When you got above 90% you ordered more equipment or started building a new fab as you needed the lead time.

The cyclical problem came in where all the fabs got above 90% and all started ordering new equipment at the same time which created an over supply a few quarters down the road when all that equipment was installed.

Last year, TSMC’s utilization rate fell off a cliff in March due to Covid. Now they are likely running 100% or more (not taking tools down for normal service), running flat out trying to make up for the months of lost production due to canceled orders.

The problem is that its very difficult to make up for the loss as there just isn’t that much excess capacity in the system…its not economic.

We have previously compared the chip situation to the toilet paper problem during Covid. Its not like toilet paper makers had a sudden loss of capacity or conspired to raise prices or didn’t build enough factories. There is a finite amount of toilet paper capacity in the system as you want to keep the factories running at reasonable utilization.

The toilet paper problem was the opposite of chips in that demand spiked rather than dropped at the outset of Covid out of fear…. it wasn’t the bounce back in demand that caused the problem but the sharp initial uptick.

Delirium-a decline from a previous baseline mental functioning that develops over a short period of time.

The US freaked out during Covid when it figured out the Chinese controlled all the PPE in the world. We freaked out again when we found out that we don’t make our own drugs anymore. It is that feeling of helplessness that drives people crazy.

When Ford can’t make the beloved F150 pick up truck and we can’t get enough chips to power vape “e cigarettes” we had a similar freak out reaction as it attacked the heartland of America.

We wrote a note a few weeks ago saying that the chip shortages would be to blame across a wide spectrum of industries with even more widespread impact than anyone could predict. So far… I think our prediction was correct.

All this freaking out sets the stage for political finger pointing….who is to blame?? Chip makers? the Chinese? QAnon? Did Bill Gates corner the market on gps tracking chips to surreptitiously inject along with fake vaccine?

GloFo is only spending a bit over $1B in capex which is barely enough to keep running in place and maintaining what they have. They are certainly not expanding US capacity with that low a spend level which is barely a rounding error of what TSMC and Samsung are spending, its a joke.

We certainly don’t mind the “shortage” being an excuse to spend more domestically on chip making we should just understand that shortage is not the real reason.

If its not broke, don’t fix it

The semiconductor industry is not broken…at least not the supply side. If anything the industry is way more mature than it used to be and a lot smarter as to how it spends money. The industry has consolidated to a few very successful players…perhaps too few… but that’s hardly broken.

Despite all the whining we continue with Moore’s Law one way or another. Smart Phones are smarter and computers are faster and chips are everywhere. I don’t see a problem here.

The customers got themselves in a tizzy by acting stupidly and not understanding their own supply chain…..shouldn’t have canceled those orders for 25 cent anti lock brake chips during Covid cause they need them to ship a truck when things get better.

For a long time chips have been taken for granted much as the oxygen we breath…it will always be there and always in adequate supply. Valuations have been low and software and apps have been the sexy tech plays.

Shortage always makes the heart grow fonder…..As Joni Mitchel sang…you don’t know what you got til its gone.

Valuations are now through the roof and semi’s are sexy once again after more than 20 years or so.

You can’t have the kind of fun we are having right now in the chip industry without a huge hangover.

We are partying like its 1999….but sooner or later we will get to excess capacity and we will pay the price.

The investment question is how long does the party go on for?
So far it appears that this could be at least a multi-year long party if not much longer. There are multiple positive factors and the spending will take years as we haven’t even built the buildings to house all our new toys yet. It will be hard for Intel to spend $20B…it will take years….ASML can’t even make EUV tools fast enough to help the drunken sailors spend their money.

The end is never pretty but at least this will be a party to remember for a long time. It will likely come to an unnatural end for some reason other than what we expect.

There may be ebbs and flows in the stock prices but there is no reason to leave the party early as we are just getting started.