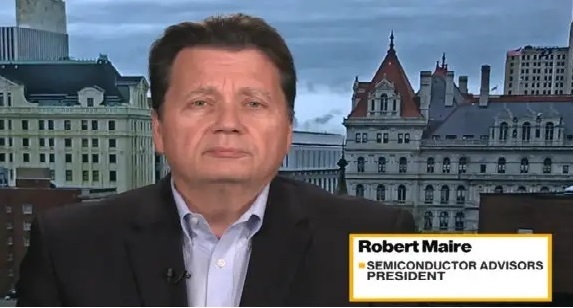 – Semiconductor shortage is like toilet paper shortage in early Covid
– Panic buying, hoarding, double ordering will cause spike
– Could cause a year+ of dislocation in chip makers before ending
– Investors, Govt & Mgmt will get a wake up call from earnings hit

Auto industry is just a prominent tip of chip crunch iceberg. We believe the chip shortage is spreading across other industries

The automotive industry is just a very prominent, in your face, example of the semiconductor industry problem as it involves the highest financial impact ratio; That is that a 25 cent chip can stop the revenue associated with a $50,000 car.

Wait till we get the earnings report from Ford for Q1 and they have a significant revenue and earnings shortfall, due to the production halts, that they blame on those tech guys in California’s Silicon Valley.

From an investment perspective we think we will see similar revenue and earnings impact across a number of industries…not just tech related.

In the past we have seen delays in laptops and servers which were relatively common. Last year I ordered a laptop that was delayed two months due to “production problems” (AKA chip shortage).

We would expect chip shortages to hit telecommunications equipment makers; everything from 5G to routers etc. Video cards have always been in short supply due to chip shortages. It could roll downhill to consumer goods from TVs to washers (don’t laugh, large appliances have been already in short supply). We would bet that earnings season will see a whole bunch of diverse companies missing numbers due to components shortages. Its just hard to predict who because everything has a chip in it.

Being a Big BFF with a long history helps

In this type of situation it pays to be a long time, big, close customer to the chip makers, like Apple. They are so tight with TSMC there is no light between them. You can rest assured that Apple will get all the chips it needs, both expensive and cheap from TSMC and they will always be first in line. Apple is TSMC’s number one customer so it will be no other way.

On the other end of the spectrum you likely have auto makers who are notoriously tough with their suppliers buying 25 cent chips at low margins. What are the odds of their orders being sped up? Zero.

Auto makers only have themselves to blame as they cut orders early in Covid and shouldn’t be shocked when they had to get back in line, at the end of the line, to re-order. Its called supply chain management.

Tom Caufield, CEO of GlobalFoundries, had said that his phone is ringing off the hook from auto manufacturers asking for wafers and he is “everybody’s new best friend”.

Broadcom’s CEO, Hock Tan, said on their call last night that Broadcom is pretty much booked up for the year and he doesn’t know when the shortage will subside. Broadcom is a big customer of TSMC and it doesn’t sound like they are getting extra wafer capacity.

Perhaps the biggest physical evidence of the panic Covid caused was the shortages of toilet paper in supermarkets in the early part of Covid.

Consumers probably thought they were going to be locked in their homes for months or paper factories would be shut down for months because it seemed like a years worth of TP was sold in days.

As we have seen in the past we think we are also seeing evidence of panic buying of chips, double ordering and stocking up.

We think there has already been hoarding by Chinese customers for well over a year who were concerned, rightfully so, about being cut off. Now add to that, hoarding by more customers currently experiencing supply problems. If I were in the auto industry supply chain I would be double and triple ordering and stocking up lest I lose my job.

Coming down off the “sugar high” may be problematic- Is this the high point in the cycle?

Right now chip makers are everyone’s best friends and popular on speed dial but the hangover from the current party could create a headache. As we know from a very long history, the chip industry is cyclical and goes though those cycles which are based on supply and demand and therefore pricing. Right now supply is short and demand is high…maybe artificially high due to hoarding and double ordering…and maybe supply is tight in the short term due to the Texas power problem and other issues….seems a bit like a “perfect storm”

A year or two from now chip makers could be a swipe left and ghosted by those currently in desperate need of a chip fix. Poetic justice would be for chip equipment to suffer shortages. Not likely.

It would be very funny cosmic Karma if chip equipment companies were impacted by the current chip shortages. After all, semiconductor equipment does happen to have a lot of semiconductors in it and the supply chain goes directly through China. The equipment controllers are basically souped up PC’s and dep and etch tools have a myriad of sub-system suppliers; robots, RF, Gas boxes etc; An EUV lithography tool is such a Rube Goldberg it likely has hundreds of chips.

We don’t expect a problem from chip equipment makers, but it could happen. In general, most everybody in the chip industry understands and is on guard for supply issues….obviously unlike the auto industry.

From what we can tell the shortage issues seem to go beyond chips. Other components and discrete semiconductors are also short in some cases. However, this is likely due to panic buying and ordering from nervous customers and not systemic supply issues as in the mainstream chip industry.

Is the Panic worse than the Problem?

Much as with toilet paper the problem is likely less severe than the issues caused by the surrounding panic. The semiconductor industry making the news is far from normal. If I made a $50 consumer good with chips in it, I might get freaked out when I hear Ford has to shut down factories cause they can’t get chips.

Could the chip shortage hit economic growth and Covid recovery?

The dislocation in the chip industry does not come at a good time as we are looking at climbing out of the hole that Covid has put us in. Having car factories shut down and revenue and earnings hits at some companies certainly will not help the recovery.

It just creates more friction and resistance to the recovery. We think we could very easily see two to three quarters of direct impact on companies with some residual impact even further out. What remains to be seen is whether the lessons learned will actually be adopted or forgotten once it leaves our immediate memory, a year down the road.

After a yearlong or more strong run, it has been feeling like the semiconductor stocks want to roll over. We have had some days of stumbles. Valuation multiples are at all time highs. Some suggest a “re-pricing” but we had a similar re-pricing at the last cyclical peak only to pull back.

2021 is shaping up to be a very good year as momentum seems strong for business with little probability of a downturn. But the stocks don’t always follow earnings step for step and the semi stocks have always turned before business turned.

The chip shortage will eventually end and the real question is what happens after?

“For Want of a Chip, the Auto Industry was Lost”