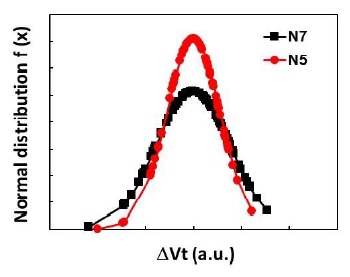 Advanced Process Development is Much More than just Litho
by Tom Dillinger on 12-16-2020 at 10:00 am
View Profile
View Forum Posts

The vast majority of the attention given to the introduction of each new advanced process node focuses on lithographic updates.  The common metrics quoted are the transistors per mm**2 or the (high-density) SRAM bit cell area.  Alternatively, detailed decomposition analysis may be applied using transmission electron microscopy (TEM) on a lamella sample, to measure fin pitch, gate pitch, and (first-level) metal pitch.

With the recent transition of the critical dimension layers from 193i to extreme ultraviolet (EUV) exposure, the focus on litho is understandable.  Yet, process development and qualification encompasses many more facets of materials engineering to achieve robust manufacturability, so that the full complement of product goals can be achieved.  Specifically, process development engineers are faced with increasingly stringent reliability targets, while concurrently achieving performance and power dissipation improvements.

At the recent IEDM conference, TSMC gave a technical presentation highlighting the development focus that enabled the N5 process node to achieve (risk production) qualification.  This article summarizes the highlights of that presentation. [1]

A very significant facet of this “bandgap engineering” for carrier mobility and the gate oxide stack materials selection is to ensure that reliability targets are satisfied.  Several of the N5 reliability qualification results are illustrated below.

Note that the N5 node is targeted to satisfy both high-performance and mobile (low-power) product requirements.  As a result, both performance degradation and maintaining an aggressive SRAM VDDmin are important long-term reliability criteria. 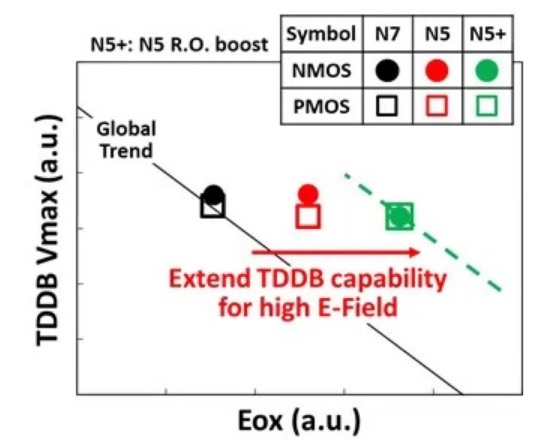 The figure above illustrates that the TDDB lifetime is maintained relative to node N7, even with the increased gate electric field.

The introduction of FinFET device geometries substantially altered the thermal resistance paths from the channel power dissipation to the ambient.  New “self-heating” analysis flows were employed to more accurately calculate local junction temperatures, often displayed as a “heat map”.  As might be expected with the aggressive dimensional scaling from N7 to N5, the self-heat temperature rise is greater in N5, as illustrated below. 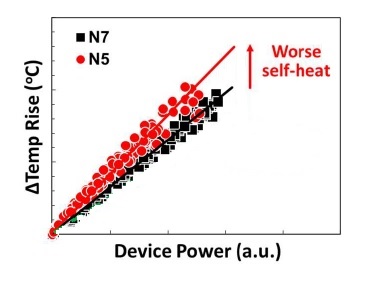 Designers of HPC products need to collaborate with both their EDA partners for die thermal analysis tools and their product engineering team for accurate (on-die and system) thermal resistance modeling.  For the on-die model, both active and inactive structures strongly influence the thermal dispersion.

Hot carrier injection performance degradation for N7 and N5 are shown below, for nFETs and pFETs.

The pMOS NBTI reliability analysis results are illustrated below, with the related ring oscillator performance impact.

The SRAM minimum operating voltage (VDDmin) is a key parameter for low-power designs, especially with the increasing demand for local memory storage.  Two factors that contribute to the minimum SRAM operating voltage (with sufficient read and write margins) are:

Based on these two individual results, the SRAM reliability data after HTOL stress shows improved VDDmin impact for N5 versus N7. 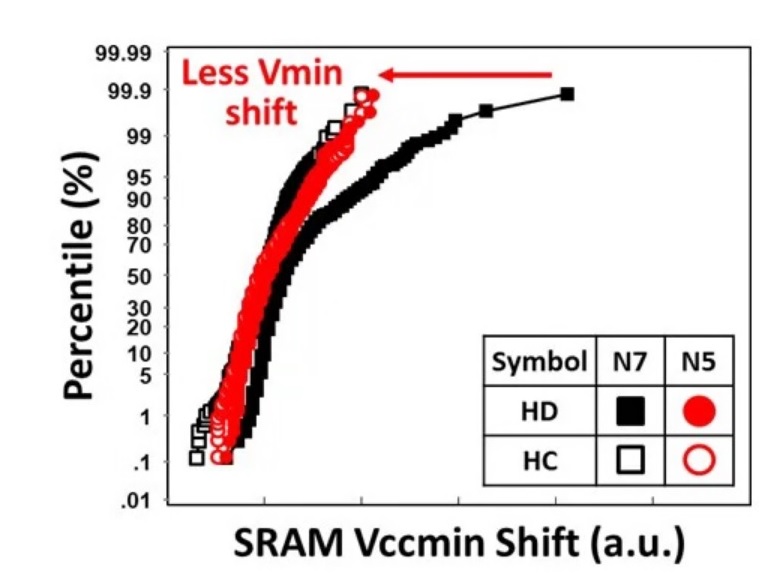 TSMC also briefly described the N5 process engineering emphasis on (Mx, low-level metal) interconnect reliability optimization.  With an improved damascene trench liner and a “Cu reflow” step, the scaling of the Mx pitch – by ~30% in N5 using EUV – did not adversely impact electromigration fails, nor line-to-line dielectric breakdown.  The figure below illustrates the line-to-line (and via) cumulative breakdown reliability fail data for N5 compared to N7 – N5 tolerates the higher electric field with the scaled Mx pitch. 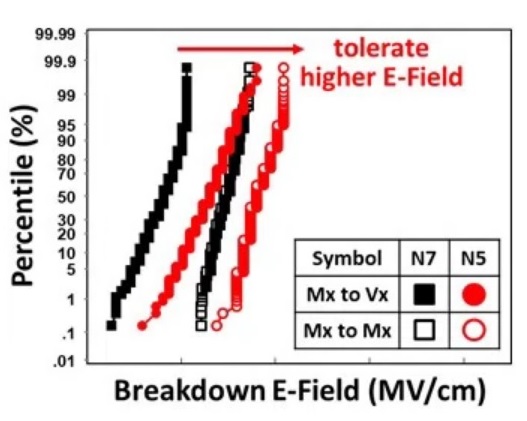 The majority of the coverage associated with the introduction of TSMC’s N5 process node related to the broad adoption of EUV lithography to replace multipatterning for the most critical layers, enabling aggressive area scaling.  Yet, process engineers must also optimize materials selection and many individual fabrication steps, to achieve reliability targets.  TSMC recently presented how these reliability measures for N5 are superior to prior nodes.