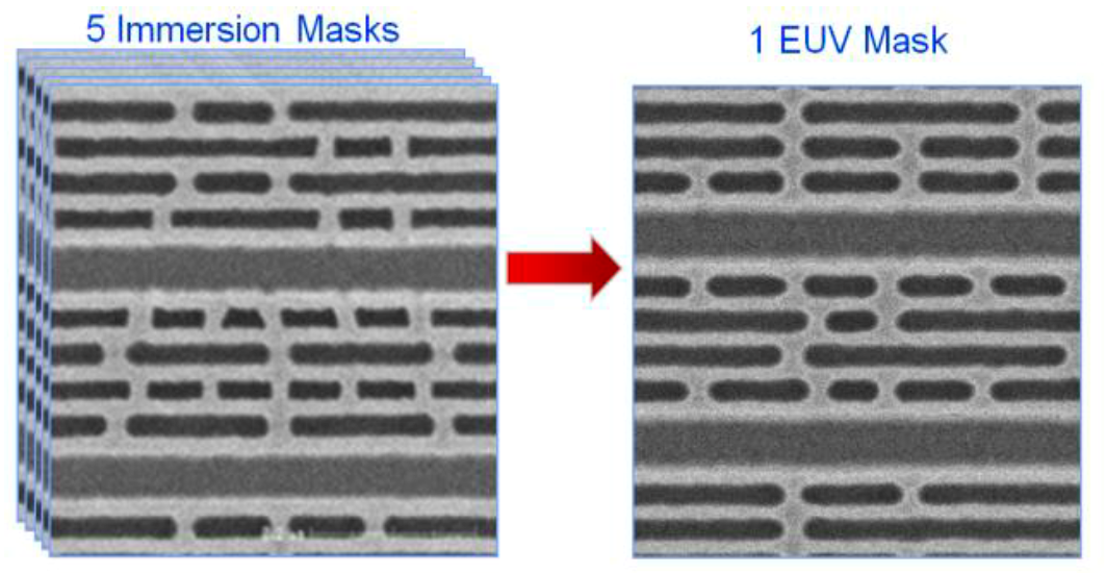 Back in April, 2019, TSMC announced that they were introducing their 5 nm technology in risk production and now at IEDM 2019 they brought forth a detailed description of the process which has passed 1000 hour HTOL and will be in high volume production in 1H 2020.  This 5nm technology is a full node scaling from 7nm using smart scaling of major design rules (gate, fin and Mx/Vx pitches) for improved yield featuring an SRAM cell of 0.021um2 and a declining defect density D0 that is ahead of plan.

FinFETs have been used in four generations from the 16nm node to 7nm, but performance as a function of channel mobility has been stagnant.  To address this, the High Mobility Channel (HMC) was implemented to increase performance.  The TEM in Fig. 2 shows the fully-strained HMC lattice constant interfaced with the Si lattice constant. The diffraction pattern confirmed HMC strain. 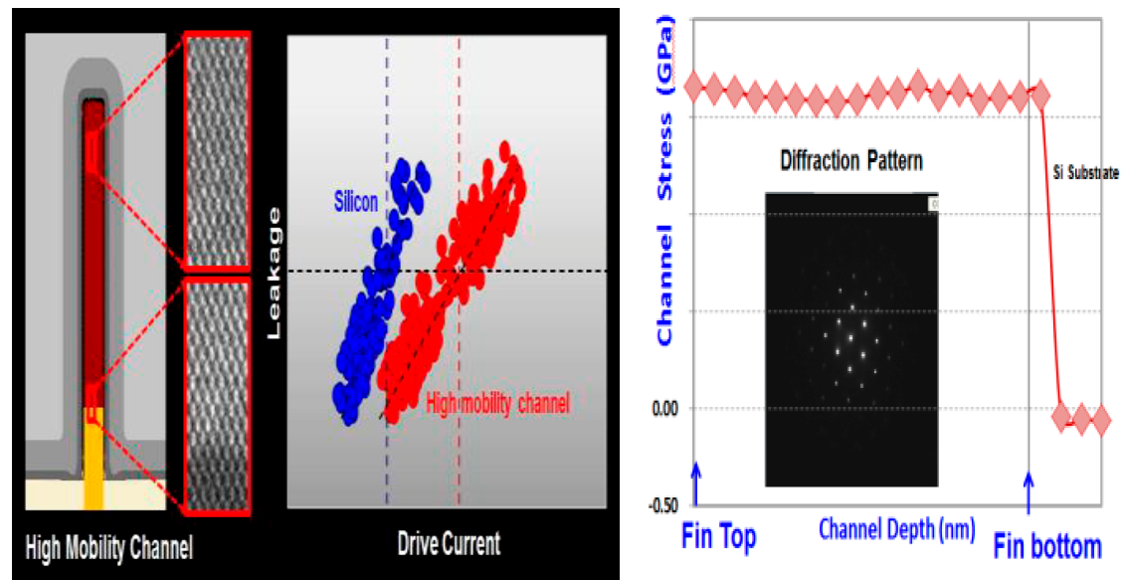 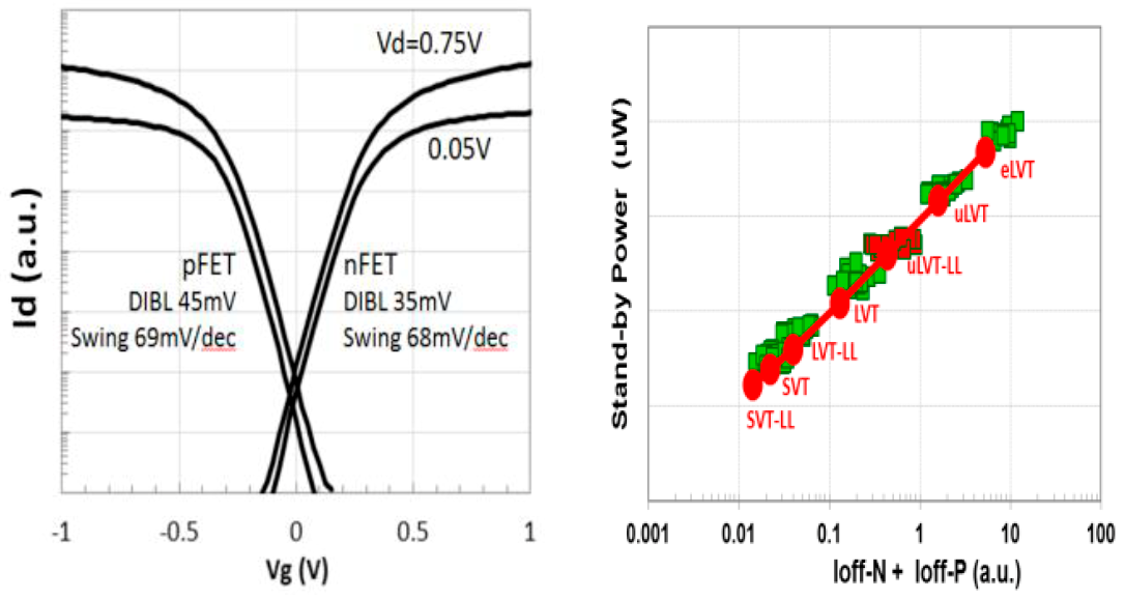 Fig. 3. Chart showing drain current vs gate voltage (Id vs Vg) characteristics of the High Mobility Channel (HMC) transistors for different drain voltages.  The second plot shows the off-current ranges, Ioff-N and Ioff-P and the relative impact on standby current of the seven different Vt’s available in the technology. The currents in both diagrams are in logarithmic scale with one decade per division.  The Drain-Induced Barrier Lowering (DIBL) is 45mV and 35 mV and the swing is 69mV and 68mV for p-channel and n-channel transistors respectively.

This 5nm CMOS platform technology is a full node scaling from the 7nm process described in IEDM 2016. The availability of up to seven Vt’s for each transistor type, shown in Fig. 4, enables product design to meet the needs of power efficiency in mobile SoC as well as peak speed requirements of HPC.

This 5nm platform technology was designed and developed to meet objectives of PPACT(Power, Performance, Area, Cost and Time to Market). Design-Technology Co-Optimization (DTCO) is emphasized for smart scaling, avoiding brute-force scaling which would lead to drastically-increased process cost and yield impact.  Design features such as gate-contact-over-diffusion and unique diffusion termination along with EUV-based gate patterning enable SRAM size reduction and increased logic density.  The 5nm technology offers 15% faster speed at the same power or 30% power reduction at the same speed with 1.84x logic density of the 7nm node , as shown in Fig. 5. 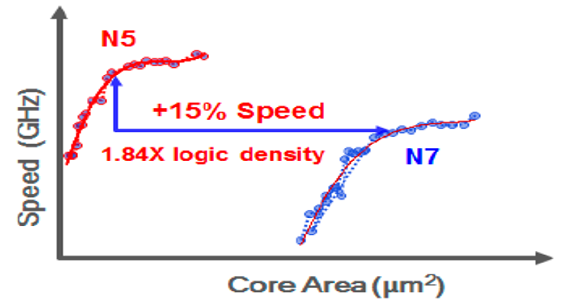 Fig. 5. Plot comparing the speed in GHz vs. the core area in um2 of the N5 technology vs the previous N7. The 5nm technology offers 15% faster speed at the same power or 30% power reduction at the same speed with 1.84x logic density of the 7nm node.

Interconnect delay has a critical impact on product performance and with each generation the interconnect propagation delay has been  getting significantly worse.  Backend metal RC and via resistance is shown in Fig. 6 for generations from N28 to N5. The tightest pitch Mx RC and the Vx Rc are kept similar to the 7nm node by EUV patterning, innovative scaled barrier/liner ESL/ELK dielectrics and Cu reflow.

Fig. 6.  Charts of  normalized BEOL metallization RC product and via resistance vs nodes from N28 to N5 are shown. For the tightest metal pitch, MX RC and via resistance Vx Rc are kept similar to that of the previous 7nm node by EUV patterning, innovative scaled barrier/liner ESL/ELK dielectrics and Cu reflow.

SRAM density and performance/leakage are critical for mobile SoC and for HPC AI. Scaling of SRAM cells with more advanced nodes is becoming more difficult in feature size terms of F 2.  The offered High Current (HC) and the High Density (HD) SRAM cells with cell areas of 0.025um2 and 0.021 um2 respectively are the densest in the industry as shown in Fig. 7. Consistent high yield of the 256 Mb SRAM and logic test chips of >90% peak yield and ~80% average yield (without repair) has been achieved. 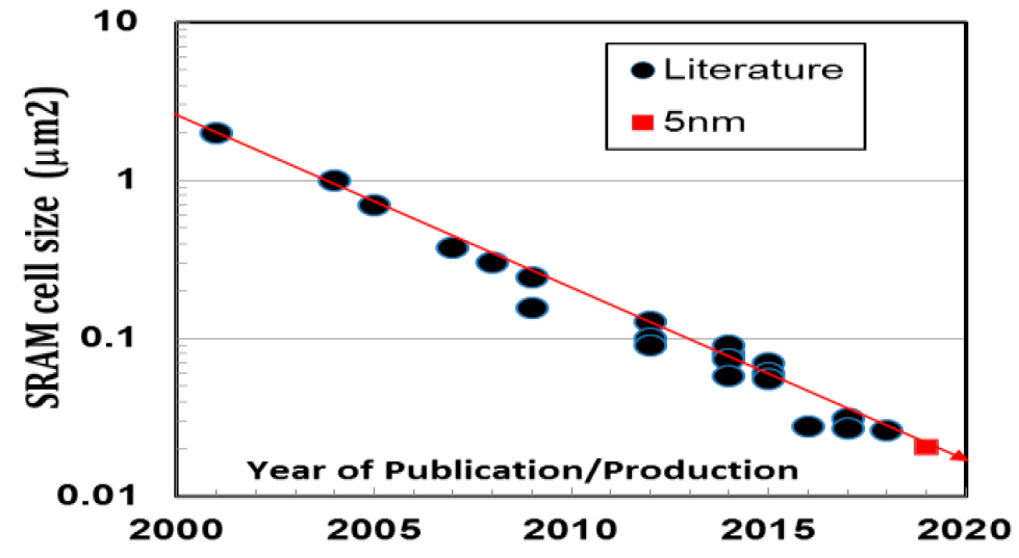 Fig. 7.  Chart of published SRAM cell size in um2 vs year of publication. The 5nm HD SRAM cell at 0.021 um2 is the densest offered in the industry.

The Ultra-low leakage ULHD can be used to reduce retention leakage for better power efficiency while higher-speed HSHD SRAM may be used as an alternative to HC SRAM cells to allow ~22% reduction in memory area as shown in Fig. 8.

Fig. 8.  Chart of standby leakage in pA at 0.4V  vs cell current in uA for ULHD, HSHD and standard HD SRAM cells. The Vout vs Vin butterfly curve plots of the 5nm HD SRAM cell  are shown at voltages  from 0.75V down to 0.3V. 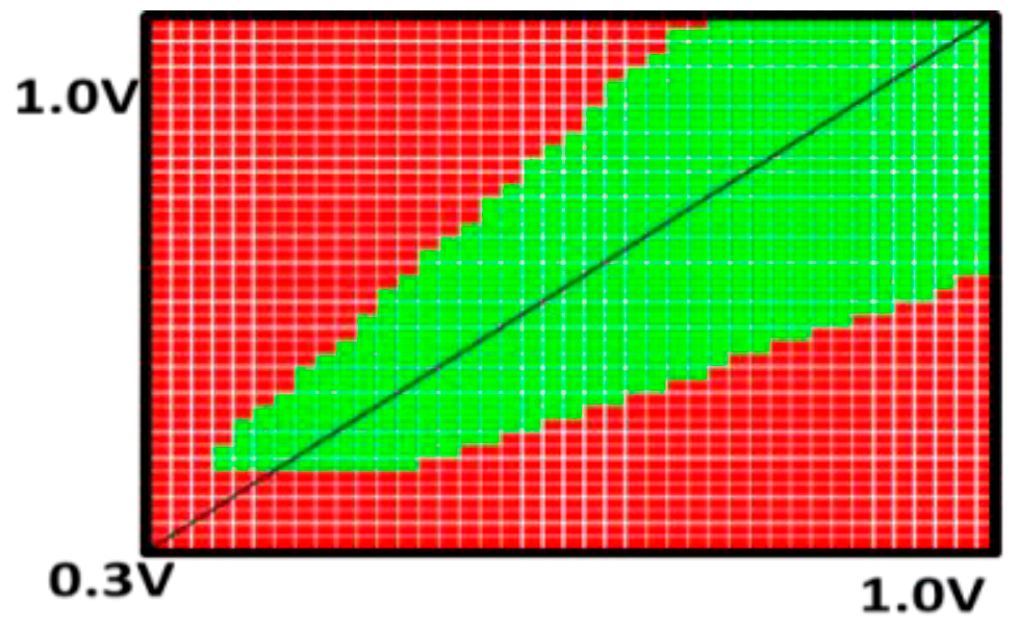 The frequency response shmoo plots of the GPU and CPU blocks in the high-yielding logic test chip are shown in Fig. 10.

Fig. 10. Shmoo plots of frequency in GHz vs. voltage for the GPU and CPU blocks respectively in the high yielding logic test chip in the 5nm qualification vehicle.

The 256Mb HD/HC SRAM and logic test chip passed 1000 hour HTOL qualification. The SRAM Vmin showed a negligible shift at 168 hours and passed the 1000 hour HTOL with ~51mV margin as shown in Fig. 11.

Stress aging data at 0.96 V and 125C on the 5nm FOM ring oscillator made with the High Mobility Channel finFETs shown in Fig. 12 with improved aging relative to the 7nm node. 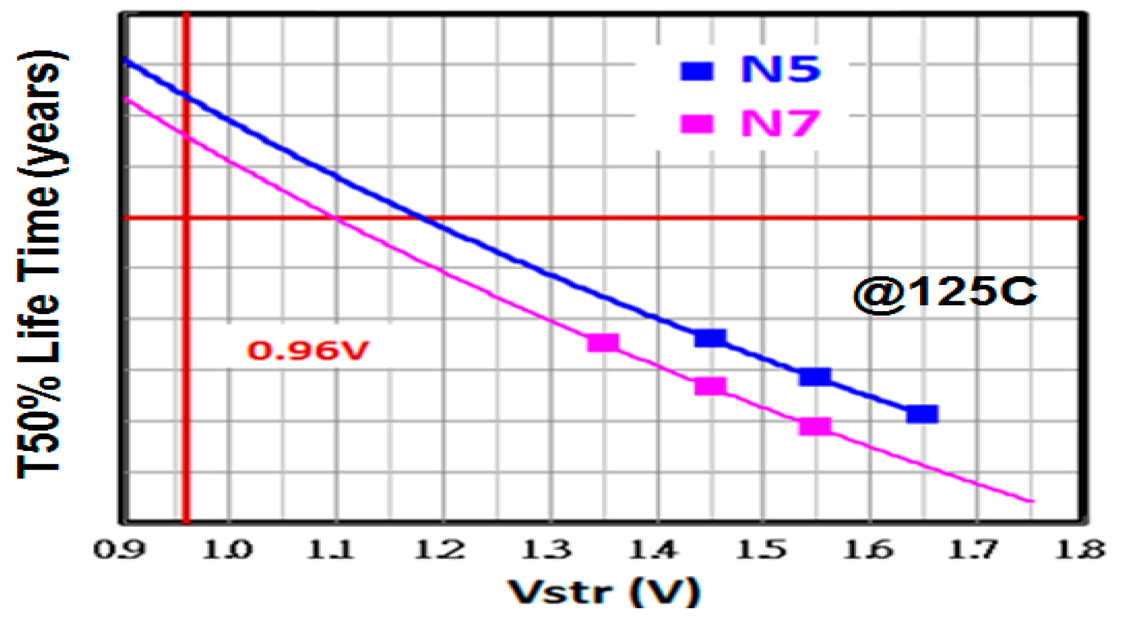 Another important feature for HPC is the metal-insulator-metal (MiM) capacitor formed in the upper layers of the BEOL metallization.  The 5nm node MiM has 4x higher capacitance density than the typical HD-MiM and produces ~4.2% faster Fmax by minimizing transient drooping voltage and achieved ~20mV Vmin reduction in a CPU test chip.