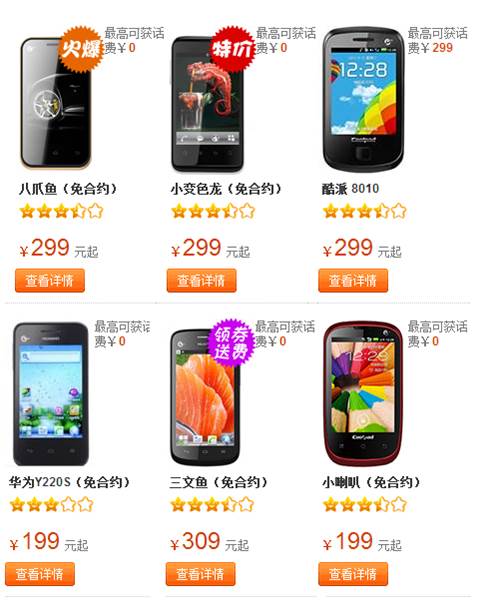 Until recently, talking about smartphone incredible shipment growth was understood as shipments of A5 iPhone or Galaxy Note, and this was true. Devices priced at $500 or more are shipping like baguette in Paris, but this fact is only true in Europe, Korea, Japan or USA. Does that means that people living populated countries like India or China don’t like smartphones? In fact, they can’t afford paying for Apple iPhone or Samsung Galaxy, but they also want to be equipped, thus they buy affordable Android devices, at a $50 to $75 price range. Thanks to these new consumers, the smartphone market is continuing to explode in term of devices volume, even if the overall growth in value is more modest.

The printed value in the above picture are not in US$ but in Yuan Renminbi, so “300” is equal to about $50. Such prices look pretty low when comparing with what we pay in western countries, isn’t it? There should be good reasons behind. Let’s have a look at the 2G Baseband chip price evolution in the picture below. In 2008, most of the phone sold were Feature phone and not yet smartphones, just starting to ship. 2G Baseband IC were selling for about $5, Nokia was still the leader, as well as TI with 41% share of this DSP based chip market, and CEVA, selling DSP IP core to chip makers designing 2G Baseband, had a modest 11% market share. In 2012, everything has changed: IC price has been cut by 50%, TI market share is down to 1% (!), and CEVA is dominant with 63% share. When cutting IC price by 2, it become easier to build a very low cost phone! Another very interesting remark is the fact that the “old” DSP chip is almost dead, at least in the Wireless market, and has been replaced by a DSP core, opening the way for larger integration, as the Baseband chip can be itself integrated into a larger multi-purpose device, the Application Processor…

But you are thinking: “OK, but you don’t build smartphone with 2G Baseband, rather with 3G IC”… which is completely true! That’s why it could be wise to take a look at the 3 G Baseband IC price evolutions: 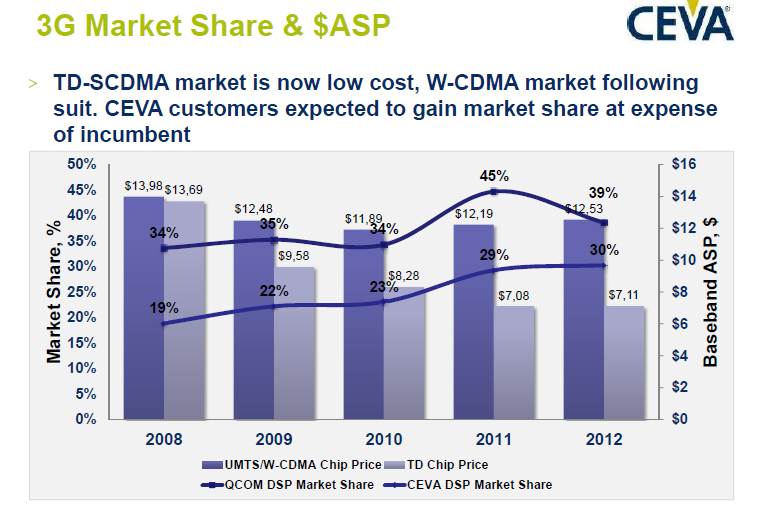 Another miracle, explaining the smartphone crazy adoption, is the fact that 3G IC price has also been cut by 2, going from $14 in 2008 down to $7 in 2012, but only for TD-SCDMA technology, precisely the technology supported in China, when the UMTS/W-CDMA (supported in USA and Europe) 3G IC price has decreased by a mere 10%. There are several consequences that we can review. The first one is that smartphone price is not going to drastically go down any soon for people like me, buying in Europe, or for those buying in the USA. The second is that we now understand why smartphone devices can be sold for such a low price in China, thanks to the 3G IC cost decrease. The latest is the market analysis we can make: Qualcomm market share has gone up to 45%, before decreasing to 39% when Samsung has decided to change 3G IC supplier, and will more likely decrease in the future, even if we don’t expect Qualcomm to do as bad as TI did. This competitive analysis also gives a very good indication about CEVA market share, constantly growing from 19% in 2008 up to 30% in 2012, and most probably expected to grow again in the future. Why? If you take a look at CEVA customer base, you list: Spreadtrum, Broadcom, Intel… and if you compare this list to the 3G Baseband IC suppliers to Chinese OEM manufacturing smartphones, it’s a perfect fit!

This latest picture show the 3G smartphone devices market share in China: Samsung is the clear leader (buying 3G BB IC to a combination of Spreadtrum, Broadcom and Intel, depending on the phone type), followed by a trio made of Lenovo, Coolpad and Huawei (buying 3G BB IC to a CEVA customer), then by many OEM enjoying smaller market share, out of which Nokia, again using 3G BB IC integrating CEVA DSP IP core. It took to CEVA more than a decade to be a DSP leader, but the company is likely to stay long, as the S/W associated with the various Modem have been validated on the long term. As a result, CEVA’ customer can enjoy short Time-To-Market, and a lower cost of ownership than when buying to Qualcomm or developing in-house DSP.