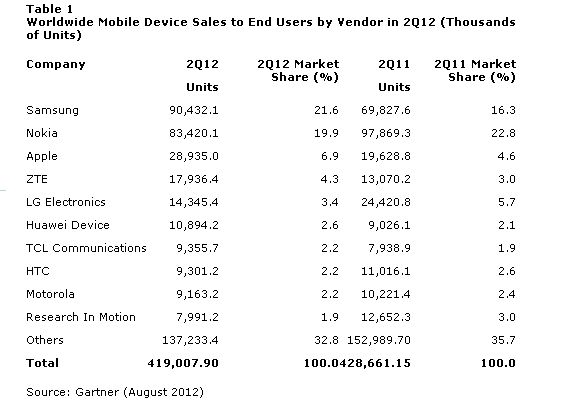 One of the comments to previous installments of this series was that there isn’t much left for the merchant suppliers of smart mobile SoCs, considering Apple and Samsung have majority share and design their own parts. The theory is this makes it hard for many suppliers to continue investing at the resource levels needed to bring a complex SoC to market.

Unless, the market we’re talking about is China.
Gartner has put out a new study on mobile phone sales worth a good, hard look. Here’s Table 1 from their press release:

The names like ZTE and Huawei and TCL on that list, relatively obscure consumer electronics brands outside of China, but with strong in-counrty branding and telecom pedigrees, is of interest. Also, looking at just Chinese sales, Lenovo shows up in the top five.

Combine this new data with IDC data showing for the first time, smartphone sales in China surpassed feature phone sales, and the prospects for rapid growth are in place.

The Chinese government has noted the trends and is backing Chinese companies to design SoCs. This spells trouble for Marvell and Freescale who have sold heavily into Chinese phone and tablet markets to date, and possibly trouble for Intel who has secured some smartphone wins in Lenovo and ZTE. Most of these Chinese-based SoC suppliers are using ARM cores but there are a couple notable entries with MIPS cores.

First, some info on some of the ARM-based companies:

Then, a couple MIPS contenders, which is interesting because MIPS has been in the set-top box segment for quite a while and is now making a mobile device push.

Is your head spinning? That’s a lot of companies in the mix, and about half were new-to-me in researching this for about an hour. One thing is clear: not all these companies can survive. It’ll be interesting to see if a captive model, like Huawei, prevails, or if a supplier like MediaTek is able to continue displacing the better-known global firms to a large degree, or if several firms succeed within the borders of China in a burgeoning market.

3 Replies to “Smart mobile SoCs: Made in China”