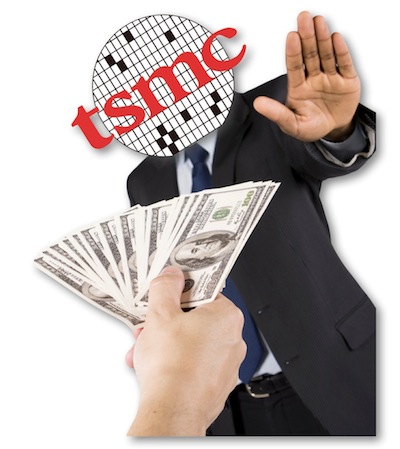 It’s amazing how these rumors start and go viral. People are literally laughing here in Taiwan. I remember I wrote something that I thought was obviously satire and less than a week later someone repeated it back to me as fact since they “read it on the internet somewhere.”

According to Bloomberg: Apple Inc. (AAPL) and Qualcomm Inc. (QCOM) were rebuffed in separate attempts to invest cash with Taiwan Semiconductor Manufacturing Co. (2330) in a bid to secure exclusive access to smartphone chips, people with knowledge of the matter said.

Both proposals included investments, each of more than $1 billion, for the world’s largest custom maker of chips to set aside production dedicated to making chips exclusively for them, said the people, who declined to be identified because the details are not public.

Sounds like a bribe to me. No wonder why they don’t want to be identified. Dozens of variations have spawned from this rumor so now it is an “internet fact”:

Even IEEE Spectrum got in on it: TSMC’s Morris Chang Says No to Apple, Qualcomm

Would TSMC build fabs for Qualcomm and Apple? Of course, if it was a responsible thing to do for the TSMC stakeholders. Samsung already does that for Apple as an example. Would TSMC accept money from a customer for preferential treatment? Of course not, and anybody who thinks otherwise does not know TSMC or how the fabless semiconductor ecosystem works. And I can assure you that Qualcomm and Apple know.

Our mission is to be the trusted technology and capacity provider of the global logic IC industry for years to come.

Now lets look at the authors of the rumor: Tim Culpan, Ian King, Adam Santariano. Sorry, never heard of them and not an ounce of actual semiconductor experience between them. Just my opinion of course.

6 Replies to “Did Qualcomm and Apple Attempt to Bribe TSMC?”