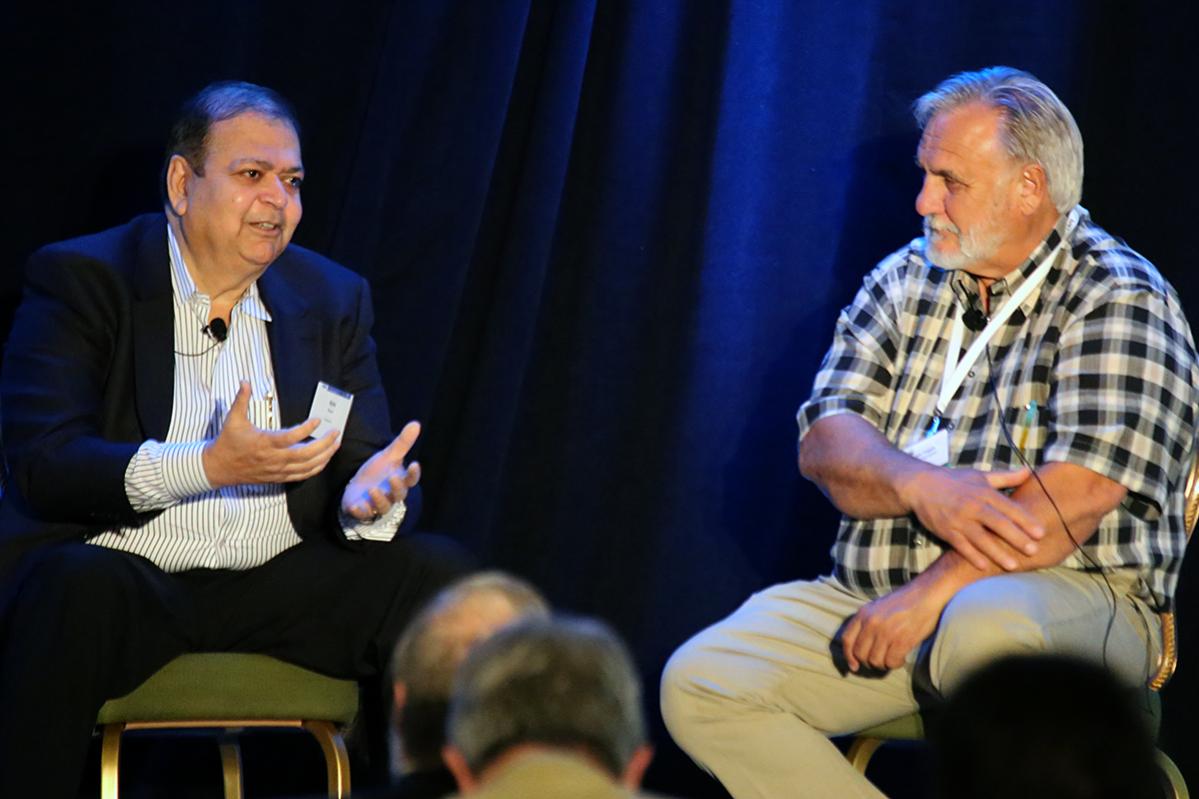 to its acquisition by Synopsys). The nominal purpose was to talk about turning a venture into a valuable enterprise. This was covered but, in Jim’s way, it was really a more wide-ranging and personal interview. This is an abstract of some highlights.

Personal and Background
Ajoy grew up in India with engineering in his veins (his father was a metallurgical engineer). He studied electrical engineering and programming at IIT Kanpur, one of the top engineering schools, then moved to Texas where he did his graduate studies at UT Austin under Steve Szygenda on topics related to the Tegas simulator. At UT he fell in love with barbeque and became and remains to this day a serious football fan (hence the SpyGlass User Group meetings at Levi Stadium).

From UT he went to Bell Labs, back in the day when that organization was a leader not just in electronics and telecommunications but also in fundamental science. He worked for Hermann Gummel, whose team innovated in many areas in EDA (Ajoy introduced me to another member of the team, Larry Nagel, who invented Spice).

As the Bell System was broken up, Ajoy decided to move to Gateway Design Automation as VP of engineering. Shortly afterwards Gateway was acquired by Cadence where he became the VP of engineering for front-end tools. He mentioned that even before the acquisition, Gateway had been concerned about VHDL momentum and had been debating making Verilog an open standard. Within days after the acquisition that decision was finalized and the language was donated to OVI/Accellera. This got Verilog momentum going again, but Ajoy stressed that what really made Verilog successful was focus on a simple HDL, obsessive focus on speed and grinding away at features and functions required to make the product acceptable to customer needs.

In the early 90’s Ajoy, feeling after working in big companies that he wanted to start a small company, launched Software and Technologies with Prabhu Goel. Outsourcing was becoming big in those days so they built an operation to deliver contract services, executed primarily in India with a US front-end. The team built library models, delay calculators, parsers and more. All this was bootstrapped with careful cash-flow management and had no need for external funding.

In 1995 Ajoy started his own independent company, Interra, to provide similar services, again bootstrapped thanks to immediate cash flow and liquidity. He reinvested extra cash in areas diversified beyond EDA/design including digital video services, e-business and IT services. Several of these are still operating today. Those were good times, not easily reproducible in the current climate, when Interra was effectively a holding company and he could be his own VC.

Atrenta
Around 2000, Interra started a project with a large semiconductor company looking for some of the Interra parsers on which they could build reusability checks for RTL. Ajoy talked them into a deal in which we would build the checker they wanted but also retain rights to the product (I had joined the company a couple of months earlier). That product became SpyGlass and we were able to sell it in quick succession to 4-5 companies. Ajoy felt the product had momentum and scalability so spun Atrenta out of Interra as an independent company and raised venture funding.

Back in those days, VCs were still interested; an EDA company could go public at $20M in revenue with 2-3 profitable quarters. Ajoy needed funding to scale up sales bandwidth – we got it on the value proposition that reuse was hot and we already had a proven solution.

Then came the dot-com bust; reuse was no longer hot and the value prop had to be reworked to a must-have need. The IPO bar rose and kept on rising. There was the Great Recession in 2008, then VCs lost interest in emerging companies that didn’t have billion dollar valuations. Ajoy slogged through it all, adapting the company and the product vision as market needs changed. Fortunately he saw and adapted to changes that were close to where we started:

Within the last few years it became fairly obvious that Atrenta was developing the revenue, market control and level of profitability that made it a likely target for acquisition. Last year, Synopsys took that step and folded the Atrenta product line largely into VG (some parts went to DG). Ajoy said that he had always wanted to build a reasonable sized EDA company that left a mark on the industry. I think we can all agree that, despite a bumpy road, he succeeded admirably.

Advice
Asked to who he attributed his growth and success, Ajoy said first Hermann Gummel, his manager at Bell Labs, and subsequently Mike Hackworth who was an independent (non-VC) board member. Mike ran large organizations in Signetics and was CEO of Cirrus for many years; he is credited with starting the fabless business (he is sadly no longer with us). He had huge experience and credibility in building and running a successful startup and transitioning it to and running it as a public business. Jim commented that sometimes good startups fail because the board doesn’t work. Bringing Mike’s experience to the board provided Ajoy with an independent advisor and kept the money guys in line.

Technically, the common platform to check across power, cdc, test, lint and so on was a big advantage, reducing development costs and ease of adoption by customers already using some aspects of the product. We all hate having to learn new tools – the more functionality you can provide in a unified use-model the lower that resistance will be. And an obsessive focus with ease of use for casual users was important. Static verification is famous for noisy output. Reducing this, simplifying review, providing summary reports for managers, all were important in driving adoption.

Ajoy also advised that you never get it quite right when you start. You need to be willing to recognize trends and opportunities and adapt when appropriate. Atrenta started with simple reuse “grading” but adapted successfully to the growth of IP reuse which raised new and challenging requirements unrelated to best practices as originally envisioned.

He added that in almost all cases you will face a visionary/missionary sell – even though you “get it”, you shouldn’t expect anyone else will, or that they will see the same value that you do. You have to communicate, you have to run campaigns and you have to keep polishing your story, constantly.

Questions from the audience
Did Atrenta invent Lint?No, lint was already around for C. For HDLs, Verilint and Leda were around before SpyGlass.

Atrenta has been international from day 1 with R&D centers around the world. What’s the secret in making this work?Ajoy’s experience started with Cadence and grew with S&T and Interra. There’s been a lot of maturing of the model across the industry, not just in Atrenta. In Atrenta, the management team is due a lot of credit for making this work well.

Atrenta grew mostly organically with only one acquisition. Is this the best way?The SpyGlass platform was a strength but would have made integration of independently-developed products more challenging. However, as revenue targets continued to grow, eventually we would have had to look at further acquisitions. If Ajoy was going to do it over again he might instead have optimized for an early sale. Building a big company is expensive and hard. Both Jim and Ajoy suggested for most ventures an early exit was greatly preferable to bulking up.

Any other advice?Be careful about what products you get into. It is very easy to get to having lots of products, many with questionable (or negative) return, then finding it difficult to back out of commitments. Small is beautiful and quick is beautiful. Be ruthless about pruning.

Why did Verilog win over VHDL in the market?Phill Moorby had built two simulators before Verilog so knew what to do and what not to do. And he spent a lot of time optimizing performance, sometimes at the cost of other things (like event-ordering) which eventually had to be cleaned up. Which may also suggest some interesting advice – sometimes prioritizing fast over absolutely correct (an engineering heresy) can be the right choice.

What will happen with EDA in next five years?Five years is a short window. Semiconductor companies really have to work through their role(s) in the market first (before clarity for EDA will emerge). The honest answer is who knows? That said, chip design still depends very much on EDA and always will.

Ajoy the Person
At the end of it all, we are measured not just by what we accomplish in technology and business, but also the impression we leave on others. We can only hope we do as well in this department as Ajoy.

Jim runs a charitable organization called the Heart of Technology which helps kids at risk. He stressed that thanks to Ajoy’s direct involvement, Atrenta has always sponsored the organization and Ajoy has always written a personal check. Ajoy and the company have also been actively involved in multiple charities, especially the Second Harvest Food Bank.

I have worked with Ajoy for nearly 20 years and can attest that he is one of the kindest, highest integrity and most loyal people you could hope to work with. This isn’t just my perspective. I have heard the same opinion echoed by many people within the company and across the industry. I wish him luck in whatever he does next.