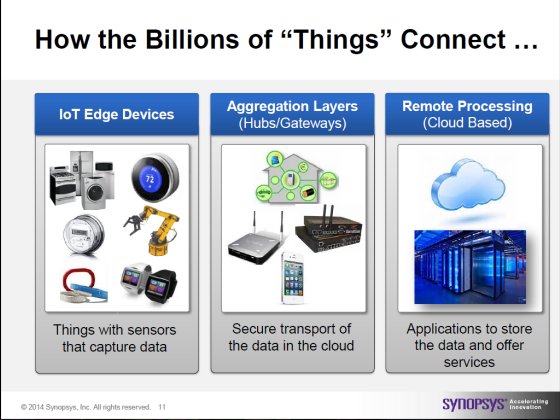 No need to explain the IoT acronym (Internet of Things) except that IoT doesn’t really describe a reality: do you really know about any “Thing” being directly connected to the Internet? In fact, there is probably some intermediate system linking this thing with the Cloud, like a smartphone, an Internet box, a PC, etc. Just take a look at this picture below, more representative of the real life, showing the Aggregation Layers at the middle of IoT Edge Devices and Remote Processing.

Thus, why not calling a spade a spade, and the “IoT Edge Device” a Smart Connected Thing, or SmarCoT…

Smart because this thing really needs to be:

SmarCoT has to be connected because this is the concept foundation, which makes it attractive for the end user. It can be:

The last one, the “Thing”, can and will be absolutely anything, from a $300 watch targeting rich sportsmen to the $5 device still to be imagined. 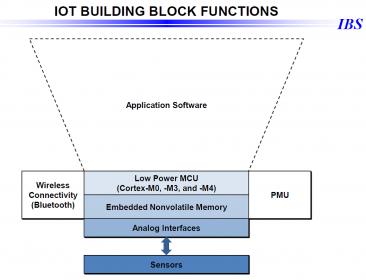 Another point: the business model related to SmarCoT is still to be created. Most probably the success will come for the creative enterprises building a complete system and the related software, generating monthly subscription or fees, rather than to the IC maker. Thanks to Handel Jones from IBS, this slide presented to Shanghai SOI last fall illustrates the functional model: the sensors in contact with the real (analog) world are connected through analog interfaces to a low power MCU and the eNVM, processing whatever is to process, the complete system being connected through BlueTooth in this example. The Power Management Unit will be mandatory to manage the battery in a low power fashion.

What is the big piece on the above picture? Application software, and I would guess that this software will generate more revenue than the hardware!

So, are you SmarCoT or IoT?

This blog is not a poll… but feel free to give your opinion below.

0 Replies to “Are you SmarCoT or IoT?”