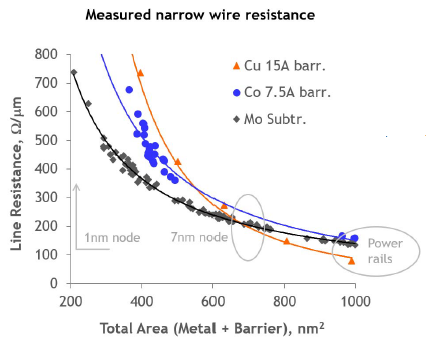 Introduction
During the “golden years” of silicon technology evolution that applied Dennard scaling, the tasks of fabrication process development and library circuit design were rather disjoint.  Physical and electrical models for scaled devices and interconnects were derived and IP design progressed while the process was being qualified.  The development of “contactless” local FEOL metallization and the transition to damascene Cu BEOL interconnects introduced some additional considerations – yet, process bring-up and IP design were still relatively distinct.

Several factors led to the need for a much closer collaboration between process and library development, a partnership which has been described as “design technology co-optimization” (DTCO): 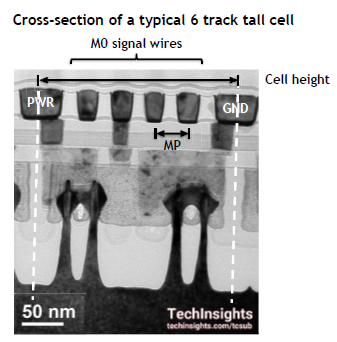 In all these cases, DTCO was necessary for process and IP development (and for the subsequent introduction of enhanced process variants at the same physical node).

Fast-forwarding to the present…

At the recent VLSI 2020 Symposium on Circuits and Technology, a prevalent theme was the transition from FinFET to gate-all-around (GAA) “nanosheet” devices.

A team from Synopsys and Applied Materials provided an invited talk with compelling data from their DTCO analysis of GAA-based cell library design for sub-5nm nodes. [1]  I found their analysis to be extremely interesting, and their conclusion a bit surprising.

The figures below illustrate the relative comparison between these metals, as the dimensions are scaled with advancing process lithography.

Figure 2.  Comparison of the resistivity of different metals with dimensional scaling, as a function of the cross-sectional area.

Note that damascene-based patterning at these dimensions will result in more impactful metal grain boundary influence on the electron mobility.  Yet, Cu still outperforms the other metal options evaluated for large cross-sectional area.

Figure 3.  Comparison of the via resistance of different metals.

The DTCO team analyzed several different GAA-based cell topologies, evaluating their PPA characteristics.  (Models for a three-layer GAA device with 13nm channel length and varying widths were developed by the team – these models were then applied for the cell design analysis.)  The figure below depicts the six topologies considered. 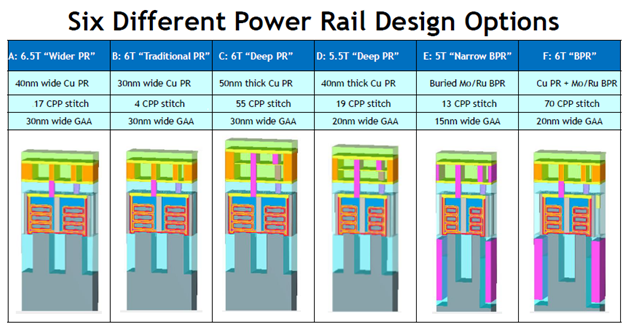 The figure below details the four options A, B, C, and D.  Options A and B continue to use Cu as the metallurgy.  Designs C and D use thicker Cu for power rails, with additional processing to introduce a different metal for signal wires.

The figure below illustrates the cell design incorporating a buried power rail (BPR), with Mo (or Ru) as the metallurgy. 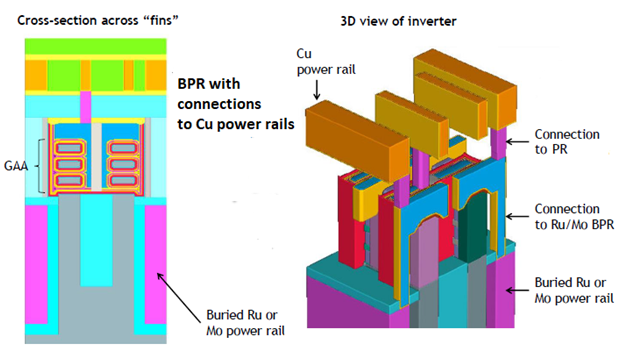 An important facet to this analysis is the need to pursue the physical implementation of a large, complex block design, to evaluate:  local pin access issues, overall routability (with the requisite PDN stitching density), power, and performance.  The DTCO team completed the design of a GPU core for the six cell library options.  The PPA results are shown below (as iso-power) – the 6T cell design serves as the baseline (“B”, 120nm tall, Cu signal wires, dense 30nm Cu power rails). 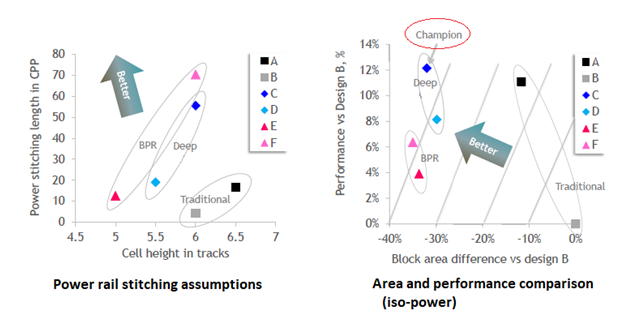 The “champion” of this PPA optimization analysis is configuration “C” – a 6T cell (120nm high) with a “deep” Cu first metal power rail and an alternative metallurgy for signal wires.

Note that the cost of the additional steps to provide for a composite metallurgy at first metal is not included in the analysis, nor were the steps to introduce the buried power rails.

I found the result to be of interest, as it demonstrates the significance of DTCO analysis.  At advanced process node dimensions, the choice of (damascene or subtractive etch) metallurgies, the requisite patterning, and the GAA device design width are all strongly interrelated.

Of particular note were the results of the BPR cell designs, “E” and “F”.  Note that the GPU block design area was minimal for these choices, suggesting that this may be the best option for embedded SRAM arrays.  (Indeed, another presentation at VLSI 2020 provided a compelling argument for the bit cell area reductions afforded by using BPR for ground distribution, with VDD remaining on first metal.)

It will be intriguing to see how the foundries and their customers address the varied material and patterning DTCO options for sub-5nm nodes, for logic, SRAM, I/O’s, and mixed-signal IP.  Of course, cost will be another critical factor in the ultimate selection.  For more information on the Synopsys DTCO flows and these recent results, please follow this link.