The ISO 26262 standard defines four Automotive Safety Integrity Levels (ASILs), from A to D, technically measures of risk rather than safety mechanisms, of which ASIL-D is the highest. ASIL-D represents a failure potentially causing severe or fatal injury in a reasonably common situation over which the driver has little control. Certification to one or more of these levels requires demonstrating that a system can guarantee better than a specified probability of failure, generally requiring increasing levels of failure mitigation, analysis and supporting documentation with each level.

Semiconductor component providers have opted in many cases for certification to component levels below D for cost and/or time-to-market reasons. But this is changing. As electronic content in our cars is increasing, distinctions between what does and does not critically affect safety are blurring. An ECU that might be used in an ASIL-B function today could become interesting for use in an ASIL-D function next year. Consequently, OEMs are extending their demands for ASIL-D certification across more components, to ensure they’re covered no matter what the application.

This ramps up effort demanded in safety assurance in more designs. Certainly component functions must demonstrate mitigation to an appropriate level, but also special care is needed in integrating those components together, commonly through a NoC interconnect. There are three approaches that designers can take to ASIL-D compliance for that network-on-chip: 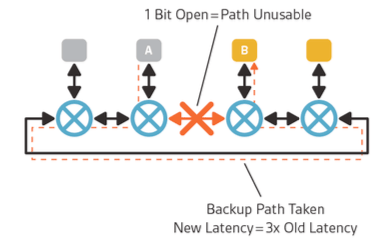 For a way to meet these new stringent requirements, the last method above is difficult to beat. Adding 8-bits of ECC to a 64-bit link increases the size of the NoC by a little over 10%, versus doubling the size if duplicating the NoC. The solution is entirely in hardware and errors are corrected instantaneously with no need for software reconfiguration and no extra latencies. Finally, validating fault coverage and building a comprehensive FMEDA for the configured network can be completed with existing tools, compared with a path diversity approach which would require analysis over both hardware and network reconfiguration software.