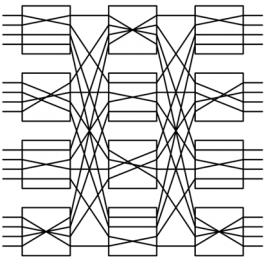 I have bloggedbefore Christmas about the Arteris-Sonics war, initiated by Sonics, claiming that Arteris NoC IP product was infringing Sonics patent. We had shown in this post that the architecture of Sonics interconnects IP product was not only older but also different from Arteris’ NoC architecture: the products launched initially by Sonics, in the 1995-2000 years, were closer to a crossbar switch than to a Network-on-Chip. Having done this analysis, our feeling was, because Arteris solution is fresher (2005), that Sonics’ claim against Arteris was unlikely to be justified.

The answer from Arteris, coming January 27[SUP]th[/SUP], reminds me Clausewitz well known strategy: “Attack is the best way to defend”! From Arteris’ PR:
“January 27, 2012 – Arteris, the inventor and leading supplier of network-on-chip (NoC) interconnect IP solutions, today announced that it has filed a complaint alleging that Sonics’ newest product, SonicsGN (SGN), infringes Arteris patents. In addition, Arteris responded to the lawsuit that was filed by Sonics Inc. on November 1, 2011, asserting that it has not infringed the Sonics patents, and further that the Sonics patents are invalid.”

Pretty tough answer, isn’t it? This is clearly a two step manoeuvre: when Sonics was funding their attack on the past (they were the first on the market, so a new comer has “certainly” infringe their old patents to compete on the same market), Arteris bases the attack on the present. The company is claiming that Sonics latest products (SGN), based on a new architecture which is now similar to Arteris NoC (just remind that Sonics initial products were “crossbar switch” like), have “necessarily” infringed Arteris’ patents (in both cases, the quote reflect my interpretation, not a certified fact). The second step is a more classical defense (Arteris has not infringe the Sonics patents), but going further when saying that the Sonics patents are invalid! 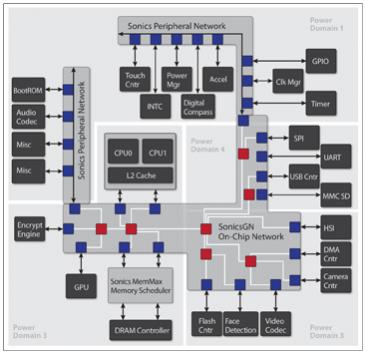 I am not a lawyer, neither a patent expert, nor a specialist of NoC architecture… that said, it would be strange that the products developed by Arteris ten years after the introduction of the first products from Sonics, based on a different concept (Network vs Crossbar Switch) and consequently a different architecture, could have used features specific to Sonics products, covered by patents. To penetrate a market already occupied –by Sonics- Arteris had to innovate, not to duplicate. Similarly, it’s attractive to think that, when Sonics, the interconnect IP market leader, has realized that Arteris was making design-in after design-in (at customers previously working with Sonics), and was going to kick them out of this market, the company decided to develop a product similar to Arteris NoC! If the market is asking for a certain kind of product, better optimized in term of power consumption, performances (latency) and wire length (layout) and if you serve this market, you just want to satisfy your customer.

By doing so, Sonics appears to be follower, the company who duplicates when the direct competitor innovates… In this market configuration, when the follower need to close the technical gap and respect a tight Time-to-Market, the risk of patent in infringement is simply higher, because you need to go fast and can’t necessarily check that every single piece of a complex design is not infringing a patent. All of the above is pure speculation (let’s call it a feeling), and may not be true. But it possibly could be true…

I am happy to see that one of the Arteris arguments in the 27th January PR was already highlighted in my previous blogon the topic, dated November 4[SUP]th[/SUP]:

“The Sonics patents asserted in its November 1, 2011 complaint are related to the old Sonics Silicon Backplane product, and do not apply to Arteris’ true network on chip technology. Crossbar technologies were used in the semiconductor industry long before the existence of any Sonics patents, when on-chip crossbar switches were developed for communications applications in the 1980’s. Conversely, Arteris network on chip interconnect IP is a distributed packet switching network which is significantly different than older crossbar-based hybrid bus technologies used in products like Sonics’ SonicsSX (SSX) and SonicsLX (SLX).“

These few sentences synthesizes the problematic of the Sonics vs Arteris case: the historical player (Sonics) on the Interconnect IP market has entered and created this market by using a well known, proven technology: “on-chip crossbar switch”. Then when Arteris, the challenger, came on this market ten years after Sonics, they absolutely had to innovate to have a minimum chance to be considered, and gain market share. That they did by developing a new architecture: their “network on chip interconnects IP” is a “distributed packet switching network”. Innovation has allowed Arteris to best solve customers’ issues in SoC design, and Sonics understood this very well, so they decided to recently launch new products duplicating the successful architecture for NoC…