Register / Log In
Guests have limited access.
Join our community today!
You are currently viewing SemiWiki as a guest which gives you limited access to the site. To view blog comments and experience other SemiWiki features you must be a registered member. Registration is fast, simple, and absolutely free so please, join our community today!
Capex Driving Overcapacity?
by Bill Jewell on 10-29-2017 at 12:00 pm
View Profile
View Forum Posts 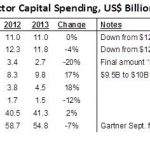 Global semiconductor capital spending is headed for another decline in 2013, following a 12% decline in 2012. Gartner’s September forecast called for a 7% decline in 2013. Most of the major spenders expect flat to declining expenditures in 2013. Intel in July estimated 2013 spending of $11 billion, flat with 2012 and down from … Read More 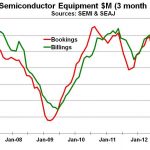 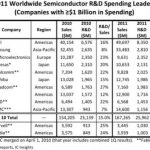