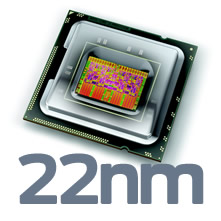 It’s just a matter of time – perhaps just a few months – before the greatest mystery of the semiconductor industry is revealed and the peaceful co-existence of the Fab vs Fabless world is blown apart. An arms race was started by Intel to challenge TSMC and Samsung on who would control not only the high valued processor but soon to be much higher valued NAND Flash and SRAM that define mobility and data center peak performance efficiency. It is not, as many may claim, a battle between x86 and ARM architectures, it is rather an SRAM – NAND dominant memory based platform battle. The shift in our understanding will help explain the mystery as to why Intel is doubling Fab capacity starting in 2012 with the 22nm process even though the PC and server markets are expected to grow in low double digits.

I have written previously about the $10.8B capex build that Intel just completed in 2011. During these past 12 months at every earning call or analyst conference, Intel executives have been cross checked on the wisdom of the massive build out and whether there would be delays, slowdowns, cancellations, pushouts etc… Otellini and company stuck to the strategy and to add a little gasoline to the fire decided to bedevil the analysts with dividend hikes and massive stock buybacks, which will accelerate earnings in 2012 and beyond. This is like FDR telling the war department to get cranking on 50 more aircraft carriers in 1944-45 after having built 83 in the two years prior even though the remaining Japanese carriers numbered in the single digits and the Germans had none to begin with.

It finally occurred to me over the holidays as I was reading the estimates of the Ivy Bridge die size at roughly 25% smaller than the 32nm Sandy Bridge die that Intel had much bigger plans in store for 2012. Ivy Bridge is a shrink of Sandy Bridge with a beefed up graphics controller in order to support DirectX 11 but unlike previous shrinks – there are no additional processor cores. And yet Intel has rushed the conversion of three fabs to 22nm, added a 4[SUP]th[/SUP] fab for 22nm, broke ground on a 14nm development fab that is 60% larger than the previous in order to ramp production immediately and then to top it off decided to build a new 14nm production Fab for late 2013 production ramp. According to Intel, total fab square footage by end of 2013 will be twice what it is today. There are three possible markets, beyond what Intel is building for today that will take advantage of this capacity – and I believe all three will see the light of day in 2012.

The first and obvious one is that Apple will be moving into Intel’s Fabs starting sometime in 2012. Apple’s incredible growth planned for 2012 based on roughly 300M CPUs (Closing in on the number of x86 chips Intel ships) can only be stopped by the words “Lines Down.” The Japanese earthquake and Thailand Floods have exposed the fallacy of the taut just-in-time manufacturing philosophy. No amount of build-ahead stocking can be as effective or economical to Apple as having multiple Fabs building the same product worldwide with guarantees of upside to replace any loss due to “Acts of God” or the imposition of trade barriers that are in the thoughts of many politicians. Furthermore, one can not overlook the trashing of the US dollar that has taken place during the Bush-Obama years that works to the favor of companies who have production facilities in the US (thus Samsung’s new Fab in Texas). Ensconced in Taiwan, TSMC’s business model is at risk to being uncompetitive if the dollar continues to decline. Intel, on the other hand is way ahead of the curve with Fabs in Oregon, Arizona, New Mexico, Ireland and Israel. And when all the dust settles, will probably pickup a certain fab in Dresden at fire sale prices in order to setup a very public cross Atlantic Ocean auction to decide who will be home for the world’s first 450mm wafer. Unless America has a Sputnik Moment, my bet is on the region with the better Bureaucrats.

Tim Cook’s master logicians have implemented the world’s first Virtual Vertical Manufacturing Operation with relatively little money down but first dibs on the latest technologies at Costco prices. They will not have the same leverage with Intel but they will gain access to the process technology that Qualcomm, nVidia, Broadcom and the rest will not have. So Intel can still make 60% Gross Margins while Apple undercuts their rivals in die size, packaging size, power and cost. 22nm is the process that is sending fears through the fabless community (as Morris Chang recently noted) as Intel has reduced standby power by 10X, meaning ARM’s mobile advantage is gone. Though they operate on different game plans, Intel and Apple have a common goal of knocking Samsung out of the game in order to dominate their respective markets and so they will become Allies in this endeavor. Longer term, Apple will need Intel’s process technology in order to smother Amazon’s tablet effort before it gains steam.

Micron’s latest earnings conference call can be described in short as toss the DRAM overboard, it’s Game-On in the battle for NAND Flash Supremacy. The Intel-Micron joint venture looks to leverage Intel’s process lead with Micron’s low overhead business model to win the battle for not only SSDs but also in the die stacked x86CPU+Chipset+NAND configuration that will see uplift in the ultrabook market in 2013. Intel will drive ultrabooks in ever smaller, thinner formfactors while raising their semiconductor content to the exclusion of AMD and nVIdia. If Samsung wants a piece of the action, then they may need to acquire AMD and head down the same road. The market dynamics here offer tremendous upside to Intel and will be the 2[SUP]nd[/SUP] area of Fab capacity utilization.

The third market segment that Intel will attack with its new fab capacity is one that is so logical that I can’t believe it is not being discussed more in the semiconductor techno-sphere. And yet to understand it you have to make a connection to the business opportunity that has been discussed in bits and pieces by Otellini and Data Center VP Kirk Skaugen. Back in the first half of 2012, Skaugen mentioned that Intel’s highest end Xeon processor that sells for over $4000 offered the best ROI to data center customers. The payback they saw in using high end Xeons was in months not years. Furthermore, Intel has raised prices on Xeon and not seen push back, meaning prices will continue to march higher. The ROI is driven by the large Level 3 (L3) caches that allow workloads to stay on chip instead of going to DRAM. So the logical conclusion is that Intel should build even bigger caches and charge more money. However the current Xeons are maxed out on die size.

This is where I see Intel building L4 caches stacked with the Xeon die and offering a new level of performance/watt that can be priced hundreds to thousands of dollars more than the current Xeons. What’s more this new business opportunity allows Intel to ramp 14nm sooner (as they have stated is their goal) with an SRAM product that serves as the process pipe cleaner and is a natural as a much faster yield ramp than any processor Intel builds. The new L4 Cache can eat up lots of wafers, effectively that generate 80-90% gross margins and become a new multi-billion $ business.

In just two short years, as 14nm begins to ramp, Intel will be completely transformed as a company. The x86 vs ARM battle will not be fought as the analysts expect. Dominance in the semiconductor business will have been fought over the superiority of the closely coupled CPU – SRAM – NAND platform of which the latter two will play a greater roll in the value of a platform and end up consuming the most die area and wafers in the Fab. The CPU instruction set and architecture are small potatoes in the overall platform.

Of the three contenders, Intel is the best positioned with process technology and current market standing to move mobiles and servers over to the new memory dominating platforms. Samsung is fighting a two front war with Apple and Intel. TSMC is behind in process technology and SRAM design and does not have a play in NAND – perhaps we will see a partnership form with a leading NAND player.

And so now we can sit back and watch how the biggest semiconductor story of 2012 unfolds as Intel launches its 22nm process.

0 Replies to “Tracking the Big Semiconductor Story of 2012”