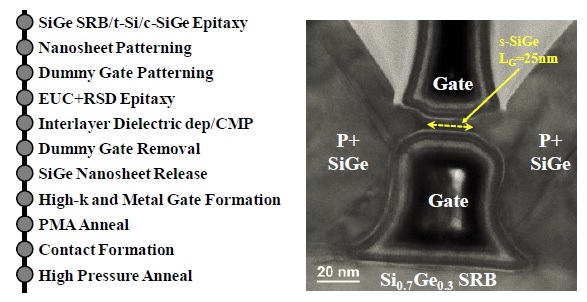 Optimization for pFET Nanosheet Devices
by Tom Dillinger on 01-04-2021 at 6:00 am
Categories: Events, Foundries, Intel
3 Comments

The next transition from current FinFET devices at advanced process nodes is the “nanosheet” device, as depicted in the figure below. [1] 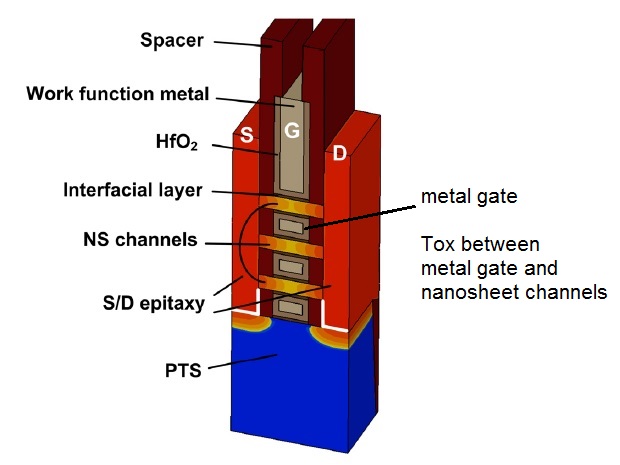 The FinFET provides improved gate-to-channel electrostatic control compared to a planar device, where the gate traverses three sides of the fin.  The “gate-all-around” characteristics of the nanosheet device provide further improvements in electrostatic control, surrounding the device channel.  This is typically reflected in a more optimal subthreshold slope, or SS.  The SS relates to the change in device gate input voltage that results in a factor of 10X change in leakage current.  A smaller SS implies both faster device switching and, significantly, a reduction in the static source/drain leakage current and leakage power dissipation.  (More on SS shortly.)

The effective nanosheet width can be further extended by stacking multiple channels vertically, with the gate material fully surrounding each of the individual nanosheets.  The design flexibility and improved device characteristics make this technology option very attractive.

There are major challenges to the introduction of nanosheet processing to production, however.  Here are but a few:

The nanosheet device is fabricated in an epitaxial layer.  The horizontal device sheet is embedded within other epitaxial-grown layers – e.g., a silicon layer sandwiched by epitaxial layers of different composition, such as SiGe/Si/SiGe/Si/SiGe.  (As will be described shortly, the close similarity in crystalline structure between Si and Ge is critically important.)

The formation of the nanosheet device “ribbon” requires a very selective etching process.  The epitaxial layers above and below are to be removed, while not etching the remaining device channel.  For multiple, stacked nanosheets, this etching process also needs to be anisotropic, so that all the sacrificial epitaxial layer material between nanosheets is fully removed.

The oxide defect density and interface trap density (for injected “hot” carriers) needs to be extremely low.  (An annealing step in a hydrogen gas environment is commonly included as part of the device process flow.)

The gate stack is typically comprised of an initial metal-to-oxide “workfunction” layer (e.g., TiN), followed by a metal to fill the gate volume, such as Tungsten.  (Atomic layer deposition (ALD) is truly an amazing technology.)

An epitaxial growth step (with a high dopant concentration) is used to increase the S/D volume next to the channel, suitably isolated from the gate by a sidewall separation oxide.  (Other FET topologies also use a similar raised S/D epitaxial step.)  Additionally, the S/D doping profile needs to ensure a low contact resistance to the first-level metal.

Of particular concern is the disparity between the electron and hole mobility in silicon.  Process development engineers continually strive to improve the hole mobility, to bring it closer to the electron mobility.  A key advance in this area has been the addition of Ge to the S/D epitaxial growth step, and ultimately, to the pFET channel – i.e., a Si(x)Ge(1-x) crystalline structure, providing a compressive strain and vastly improved hole mobility.  (Seasoned circuit design veterans will remember the days when pFET device widths were 2.5X-3X the nFET device width, to compensate for the hole versus electron mobility disparity.  With strain introduced during SiGe pFET fabrication, that difference is vastly reduced.)

The transition to a nanosheet channel of very small thickness exacerbates the difficulty in providing improved pFET device characteristics.  At the recent IEDM conference, Intel presented a detailed paper on how their nanosheet engineering has addressed this challenge. [2]  The rest of this article summarizes the highlights of their presentation.

An overview of the nFET and pFET nanosheets are depicted in the figure below.

(The focus of the IEDM Intel presentation was on pFET engineering.)

As mentioned above, compressive strain in the channel is key to a high-performance device.  This is achieved by the following:

This buffer layer offers an intermediate crystalline transition from the bulk silicon substrate, and provides some degree of additional channel strain.

The figure above also illustrates other process engineering constraints:

The transition from the nanosheet thickness (~5nm) to large p+ S/D nodes requires detailed process engineering, to electrically isolate the gate from the S/D, and introduce compressive strain into the pMOS channel from the doped SiGe epitaxy.  (More on this step shortly.)

The figures below from Reference [3] illustrate an overall flow for the general case of multiple stacked nanosheets.  (The Intel IEDM discussion focused on materials and compressive channel strain for a single pMOS nanosheet device.) 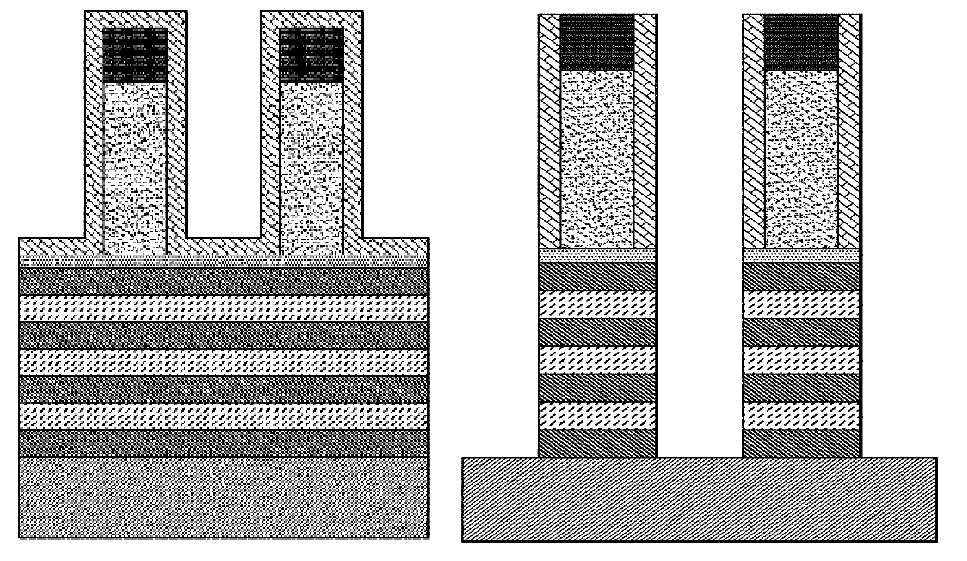 The starting material is alternating layers of undoped Si/SiGe epitaxy.  A “dummy” top-level gate is patterned, followed by conformal deposition of an oxide and (highly) anisotropic etching of the oxide and Si/SiGe layers to form the starting nanosheet stack.  The next steps are critical, as depicted below.

The sidewalls of the exposed gate areas are selectively etched, to provide a recessed volume for conformal oxide deposition.  Anisotropic etching of this oxide results in a stack where the gate areas have lateral spacer oxide, while the sidewalls of the channels remain exposed, and serve as the seed for source/drain epitaxial growth.

After S/D epi growth, the dummy gate and epitaxial gate layer are etched away (again, very selectively to the now released nanosheet channel “ribbons”).  After a pre-clean, the high-K gate oxide materials are deposited on the ribbons, followed by the (workfunction and low-resistance) metal gate stack, both steps using atomic-layer deposition (ALD).  Contact “trenches” down to the bottom nanosheets are opened and filled with metal, completing the nanosheet fabrication.  (There are chemical-mechanical polishing (CMP) steps in this flow, as well, for surface planarity prior to etching.)

Parenthetically, it should also be mentioned that extensive process R&D has been invested to select the specific crystalline orientation that optimizes the strain-enhanced carrier mobility, etch rate selectivity, and S/D epitaxial growth.

Nanosheets and the parasitic transistors

Returning to the Intel presentation for their optimized compressive strain pMOS nanosheet, IDS-VGS curves for different devices are shown below (Lgate = 55nm and 25nm). 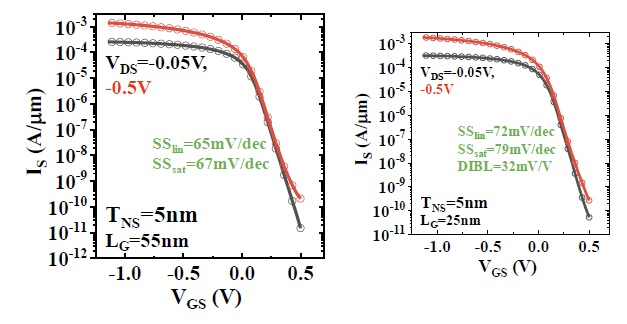 As might be expected from the superior electrostatics of the gate-all-around configuration, the subthreshold slope measured for these devices is exceptional.  (Intel did not describe their engineering approach toward establishing the threshold voltage of the pFET device.) 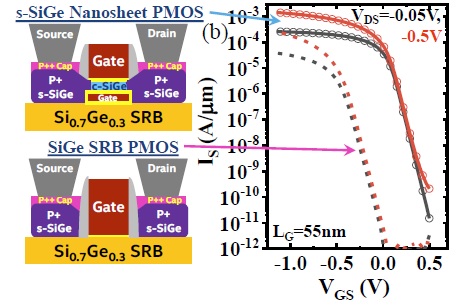 The leakage currents from this device are much less than for the nanosheet, indicating suitable suppression of this “sneak” current.  (To further reduce this parasitic current, a punchthrough stop dopant region could be introduced below the S/D contact.)

For high-performance applications, designers are seeking to boost the supply voltage toward the technology maximum.  The limitations are due to the increased Ioff leakage at higher voltages.  A higher drain-to-source electric field in the channel result in drain-induced barrier lowering (DIBL) current, and very high drain-to-gate fields result in gate-induced-drain-leakage tunnel current (GIDL).   The figure below indicates that VDD = 0.9V is feasible for this technology, before the GIDL current increases exponentially (strained-SiGe, Lgate = 25nm, t_NS = 5nm).

Nanosheet devices are the next evolution in advanced process nodes after FinFETs.  Yet, nanosheet fabrication requires several unique process steps – e.g., ALD, epitaxial growth, and highly selective etch rate ratios.  Of specific concern is the requirement to introduce compressive strain in the pMOS nanosheet channel, to improve the hole mobility.  A unique combination of Si and Si(x)SiGe(1-x) material layers and epitaxy are required.  Intel recently discussed their results on optimizing pMOS nanosheet engineering.  I would encourage you to review their presentation.