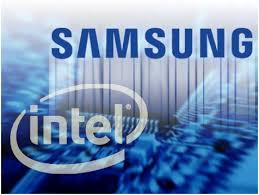 Second, Intel has significantly increased 14nm capacity this year (25%?) and from what I have been told 14nm yield is excellent. Intel is also in production at 10nm which should free up some 14nm capacity. Unless of course Intel borrowed 14nm equipment for 10nm which is highly unlikely.

Third, what about AMD eating up Intel’s market share? Intel chips are more expensive than AMD and now there are long lead times? AMD revenue numbers should be spiking?

Fourth, PC makers have no shame so Intel could be the scapegoat for missed revenue numbers. We will know more after the Q4 reports but I’m not 100% convinced either way here.

Fifth, the Samsung rumor started from the Korean press which is the least reliable for semiconductor news, my opinion.

This is a copy of the letter Intel sent customers with the paragraph highlighted that is probably the source of the false outsourcing rumors. Clearly it says Intel is freeing up capacity so they can build more CPUs using Intel fabs, right?

To our customers and partners,

I’d like to acknowledge and sincerely apologize for the impact recent PC CPU shipment delays are having on your business and to thank you for your continued partnership. I also want to update you on our actions and investments to improve supply-demand balance and support you with performance-leading Intel products. Despite our best efforts, we have not yet resolved this challenge.

In response to continued strong demand, we have invested record levels of Capex increasing our 14nm wafer capacity this year while also ramping 10nm production. In addition to expanding Intel’s own manufacturing capability, we are increasing our use of foundries to enable Intel’s differentiated manufacturing to produce more Intel CPU products.

The added capacity allowed us to increase our second-half PC CPU supply by double digits compared with the first half of this year. However, sustained market growth in 2019 has outpaced our efforts and exceeded third-party forecasts. Supply remains extremely tight in our PC business where we are operating with limited inventory buffers. This makes us less able to absorb the impact of any production variability, which we have experienced in the quarter. This has resulted in the shipment delays you are experiencing, which we appreciate is creating significant challenges for your business. Because the impact and revised shipment schedules vary, Intel representatives are reaching out with additional information and to answer your questions.

We will continue working tirelessly to provide you with Intel products to support your innovation and growth.

16 Replies to “Why is Intel Still Short on Chips?”