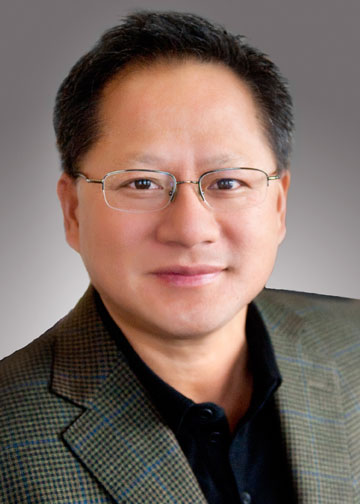 Intel may not know it but they are entering a crises moment due to the announced resignation of Paul Otellini that will not take place until May 2013. A six-month funeral with a 100,000 mourning employees will not calm customers who question whether to stick with the x86 PC roadmap much less the Atom mobile processors. A more dramatic gesture is needed to shake the company to its core and jump-start its new Foundry Business. Moore’s Law slows down for no one and given the Chasm that lies ahead, Intel needs to be bold and offer its CEO position to nVidia’s Jen Hsun Huang – immediately! And to make it all happen will only be possible if Andy Grove decides to step in and make the call.

I have read all the articles on possible internal and external candidates who could fill the slot of Intel’s CEO and none of them are as tenacious and hard driving as Jen Hsun. None have negotiated hard foundry agreements with TSMC and thus know what it means to compete with them. With AMD on the ropes, nVidia is the only true competitor to Intel in the PC space. And yet the consolidation of the 350MU PC market is rapidly approaching the end game as Apple, Samsung and Qualcomm seek to dominate the eventual 5BU+ mobile smartphone and tablet market. The Legacy PC business will be significant and profitable for some time if Intel and nVidia make an agreement as collaborators and then forge ahead into the mobile future.

As I pondered the question: What about Jen Hsun? I had to admit that the cultural differences between the companies are very different. But step back for a second and ask yourself, who in the Semiconductor market is most like Andy Grove? Is it not Jen Hsun? The truth of all businesses is that the founders get the most out of their companies, while successors seek to “Manage away all risks.” Decline becomes inevitable when steady as she goes proliferates. Intel is underperforming – Big Time. A Jen Hsun selection would bump the stock immediately with much more upside in the coming years if the company executes well.

Right now Intel has too many engineers working on too many versions of x86 processors (If you have any doubt review the 200+ processors on their processor price list). A scalpel could be used at this moment to redirect the engineers onto porting an Apple A6 processor into the 20nm or 14nm processes. Similarly, nVidia’s Tegra processors in 14nm could outflank Qualcomm’s Snapdragon processor. If, however, Andy Bryant and the Intel Board wait too long, many hatchets will arrive and the hacking will be indiscriminate. Morale will sink as the unraveling starts and star employees take first flight.

What is true of Intel today was true of GM in the 1980s and 1990s. There was model proliferation and lack of differentiation between Chevy, Oldsmobile, Pontiac, Buick and Cadillac cars. Eventually the customers woke up and ditched the Cadillac that was really a Chevy marked up by a couple thousand dollars. Many Intel processors are just a few percent lower in power or higher in performance than the next of kin that costs $100 less. It burns the PC OEMs who must manage the transitions and communicate to customers the non-benefits of these kissing cousins. In contrast, a great part of Apple’s success has been to draw distinct lines between products and thereby avoid offering consumers too much choice.

Jen Hsun, the CEO who is famous for his mantra that “We are 30 Days from Going Out of Business” would be the one person who could come in immediately and step on every toe, rip up every product roadmap while making product development and marketing folks justify their existence. Duplicative efforts would be eliminated in a fortnight while urgency would rule the day.

The challenge of redirecting Intel’s product groups is not what the grand prize is all about and therefore not of enough interest to Jen Hsun. No, what truly captures his imagination is to manage a combined Intel and nVidia with the incredible Fab infrastructure. In the past two years Intel has invested $25B in expanding their Fab footprint by 100%. This rate of CapEx is twice that of what Intel has historically spent. In roughly 15 months, there will be six 14nm capable Fabs in place where only 3 are needed to support the PC business.

What would Jen Hsun do? Earlier this year, Jen Hsun publicly suggested that Intel should open its fabs to the ARM ecosystem that sells components for <$40 which is the low end of the x86 market. His words were not just prophetic but based on an understanding of how the market naturally divided with an Innovator’s Dilemma business emerging under the maturing PC market. Jen Hsun had the advantage of selling $40 graphics chips for years and recognized that in reality the processor was becoming the sidecar to the more valuable graphics unit and soon baseband functionality.

Filling three empty fabs is a tall order, however nVidia alone could make a big dent in one of them. Apple would be next on the list and here I believe Jen Hsun could convince Apple to enhance the ARM based processors with integrated nVidia graphics and baseband functionality. The trend line on Apple’s A6 processors is up and to the right in terms of performance as they seek to close the gap with x86 processors and thereby make the iPAD an equivalent peer to the x86 powered Mac Air and Mac Book Pro Notebooks. Intel can’t prevent it so they might as well embrace Apple’s vision. Furthermore, Apple, concerned with Qualcomm’s 4G LTE baseband leverage may be looking for its own lower cost source to integrate with its ARM CPUs. In the end they would rather pay Qualcomm a license than buy its chips.

Bottom Line: Would Apple go into Intel’s 14nm process with an A7 CPU with nVidia graphics that is lower power and cost than what Samsung can build? I think the answer is definitely yes. In the end Samsung is the common enemy of Apple, Intel and nVidia. They need to collaborate in order to thrive.

Who will make the call to Jen Hsun? Andy Grove is no longer on the Board of Intel but my money would be for him to make the call as he needs to break the sclerotic log jam that exists between Andy Bryant, Otellini and the board because he understands better than anyone that Intel is not living by his mantra: “Only the Paranoid Survive”.

0 Replies to “Will Andy Grove Save Intel By Recruiting Jen Hsun Huang?”