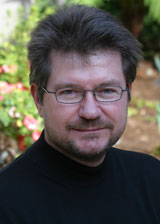 Perhaps the most pertinent comment raised by an analyst at Intel’s Investor Forum last week came from Dan Hutcheson of VLSI Research to Brian Krzanich, the COO and head of global manufacturing and supply chain. He said: “I think you sold yourself short on Trigate, the benefit of fully depleted vs. planar and the impact on leakage.” The answer is, of course, yes. This, though is confusing to the Wall St. crowd since they don’t have an idea of how process technology, processor architecture and circuit design can be married in a precise way to target various market segments. Trigate’s ability to shut off leakage has taken away the one advantage ARM has for itself in the battery life wars. If I can be bold, Trigate is the biggest thing to occur in Mobile and Server computing in the last 10 years… maybe longer. 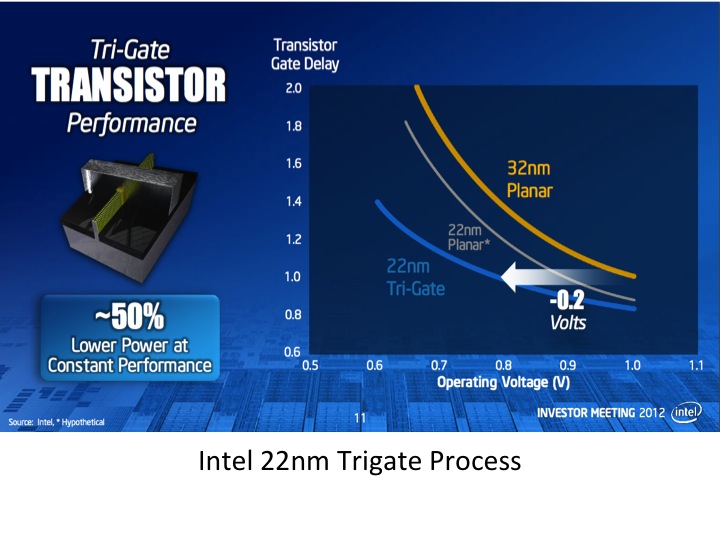 Unlike Mr. Hutcheson, though, Wall St. analysts are not clued into the fact that in the new mobile world it is not about the instruction set or that past performance is a definitive predictor of future results. Instead it is about mobile processors that can handle three modes of operation efficiently. The first is a sprint mode, where the processor reaches for its highest MHz for a short period of time in order to bring up new applications in a snappy manner. The second is to offer a cruise mode where voltage and frequency are tuned to a low frequency to run things like video efficiently and without dropping frames. Finally there is standby where you want to be as close to 0mW as possible, even between keystrokes. Depending on the user, any of the modes can be dominant in the battery life equation. However, if you are like most users, you are idle 99% of the time. Therefore standby power becomes critical.

The standby mode is where ARM has always had a big advantage. Intel’s Trigate 22nm process cuts off the leakage and enables the processor to drop into a standby voltage of 0.7V. This is a major milestone in low power operation. It is still true that Intel has work to be done in the area of a more efficient circuit design on the next Atom architecture. It is there that the full realization of Trigate gets embedded in Intel’s mobile cores – Atom and Haswell.

If you talk to an Apple engineer, you will understand that a major part of their efforts in designing their mobile processors is in running a multitude of voltage supply planes across the chip in order to cut off power to blocks that are idle or to run one block at a lower voltage and lower frequency than another. Essentially squeezing power is the name of the game. With Trigate, the hundreds of circuit design engineers that are assigned to each of the Intel mobile cores will merrily go about slicing and dicing up the functions on much lower operating voltage ranges. There may end up being an x86 core running at one dynamic voltage and frequency range while another runs at a much lower frequency and voltage. Workloads than will be directed to that which is best able to do the job most efficiently. Ditto the above for Server Processors with even more cores.

The era of brute force high MHz processors has been over for some time and Intel was caught by surprise on the ramp up of smartphones and tablets. The process guys though, in the end, always seem to bail them out of a jam. This time though, it is not just one process node of density improvement, it is a shift in the operating voltage down and to the left (towards ZERO Volts or First to Threshold), that will provide incredible, measurable improvements across all mobile markets.

8 Replies to “Intel is Selling Itself Short on Trigate!”