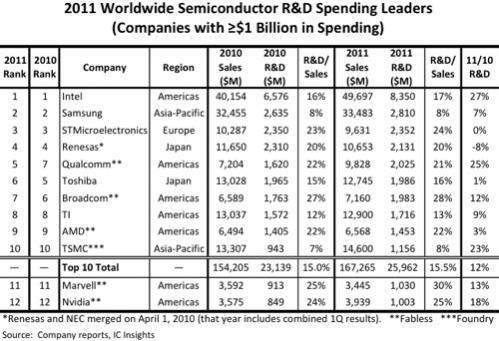 The other great news is that according toIC Insights, semiconductor R&D spending will hit a record high of $53.4B in 2012. Great news and it came out on September 4[SUP]th[/SUP] which is my birthday. R&D is now 16.2% of the total $329.9B semiconductor industry sales and I am now well into my 50’s. Seriously, I make 52 look good.

It is interesting to see that 7 of the top 12 semiconductor R&D spenders are fabless and all 7 are TSMC customers. In fact every company on this list are TSMC customers including Intel and Samsung. I think another interesting number would be total fabless R&D dollars spent per year which would include all companies that are part of the fabless semiconductor ecosystem. Even if you just took ARM, ARM customers, and the foundries that make the ARM based products it would be greater than ONE TRILLION DOLLARS as compared to Intel’s $8.3B R&D spend in 2011. That is what you call crowd sourcing and the crowd will win every time. In case you had not guessed, I’m short on Intel and that was even before Intel’s revenue warning last week.

It is also interesting to see that US based companies spent 57% of the total semiconductor R&D money while Japan spent 17%, EU 10%, Taiwan 8%, South Korea 7%, and China 1%. TSMC hit the top 10 R&D spenders in 2010 and is spending almost twice as much as the 12% published average. Also note that TSMC’s R&D increased 1% while Intel’s decreased 1%.