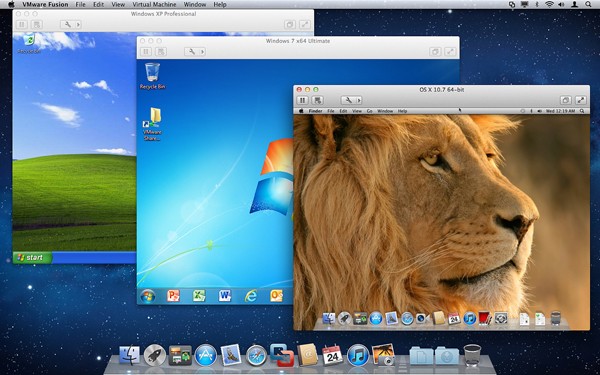 The speed with which The Mobile Tsunami engulfs the old PC Market is just incredible. 18 months ago the tablet and smartphone markets were considered a Green Field of Opportunity for PC OEMs and chip suppliers to graze in for the next decade. The fences, however, are closing in fast as Apple continues to drive its iOS empire into new geographies and market segments. Even I thought a few months back that corporations would hedge on some of their tablet purchases by staying with the Wintel x86 legacy (I was never a believer in Windows on ARM). Now I am switching my view to the conclusion that Apple and VMWare will partner to take out Microsoft in the corporate world with their full range of iOS based iPADs through x86 and MAC OS based MacBook Air and MacBook Pro notebooks.

Founded in 1998, VMWare was one of the few startup companies to come out of the 2000 technology bubble downturn and thrive with a software product that enabled much greater server efficiency. The software products they create can easily be summed up as the efficient hardware resource allocator for a multitude of application sessions running various flavors of Linux, Microsoft and MAC O/S and their applications. For the last few years they have helped us old Wintel guys switch to the MAC while running some one off Windows programs.

During the first six years of its existence it was constantly under the threat of Microsoft destroying them by coming up with their own virtualization software. So in 2004 they sold out for $625M to EMC to alleviate the near term threat from Redmond. EMC subsequently took them public in 2007 and today they are worth $40B vs. Microsoft’s $246B. For the past few years while Facebook has gotten all the attention, VMWare has seen its stock price increase by more than three times. They are an Oasis for software engineers and are hiring like mad, including in the area of iOS development. What does this mean?

A couple weeks ago I sat through multiple Wall St. analyst pitches of which one was focused on the coming corporate transition from Windows XP (remember that one – yea the one introduced when your Father was still driving an Oldsmobile) to Windows 7. The analyst described with a pained look on his face how corporate IT hates to go through the typical transition that requires them to check out every PC and see if the new OS will operate without breaking or whether to ditch it for a new machine. It’s expensive and time consuming to say the least.

Apple knows that corporations are facing two trends today that work in its favor. The first is the BYOD (Bring Your Own Device) to work (usually an iPhone and MacBook PC) and the second is the strong interest in the iPAD. Apple needs just one more trick to get the CIO to buy in to the Apple ecosystem and that is support for the Windows Legacy. This is where VMWare comes in to save the day. Their current software will allow an Apple MAC to run Windows sessions. I am speculating that when it comes to iPADs, VMware is going to offer a piece of code that sits on top of the ARM processor to allow Windows sessions that are delivered from the iCloud to the device. Remember that the iPAD has very little in the way of DRAM so the cloud is the way to go and this is Apple’s way of getting corporations to move their enterprise to its iCloud. Nice lock in strategy.

Microsoft has apparently woken up and is rumored to be announcing an iOS version of Office in November (Android versions are probably on the backburner as Microsoft is trying to use x86 tablets and smartphones to win corporate and keep Google out). This may sound confusing because on the one hand, Microsoft’s primary revenue comes from Windows based PCs running Office. On the other hand they see Apple assaulting corporate America and they must save Office, their biggest revenue generator, even if it means losing a Windows 7 or Windows 8 license. It’s the lesser of two bad choices.

The ramifications of this Apple and VMWare partnership will reverberate across the semiconductor industry. First and foremost, the Microsoft’s large $246B market cap is now to be carved amongst Apple, VMWare and Intel. Intel will continue to own Apple’s Mac business and soon will fab Apple’s ARM processor. ARMH continues to win through Apple but loses license and royalty revenue from the rest of the mobile ARM Camp that was looking to take a piece of the Green Fields. With a solid corporate strategy, it will be difficult for HP and Dell to stop the Apple Mobile Tsunami. The tide has definitely turned from the time just 18 months ago when it looked like the Fabless ARM Camp in partnership with Microsoft and Google was going to thrash Intel in PCs.