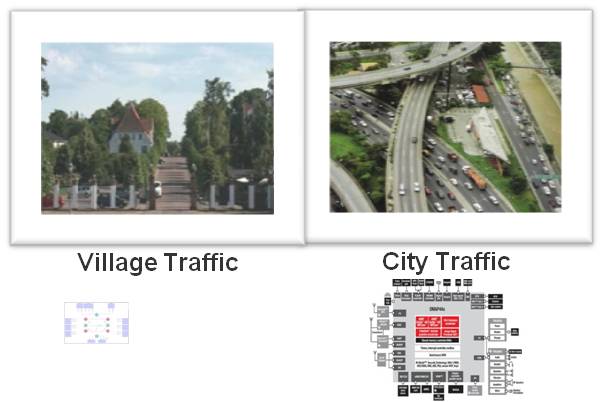 The need for Network-on-Chip (NoC) has appeared at the time where chip makers realized that they could really integrate a complete system on a single die to build a System-on-Chip (SoC). I was in charge of the development of a large IC, integrating different type of functions (Analog and Digital) to support advanced TV application. It was a long development, far to be easy, but the chip was not a SoC (even if at that time -1995- it was using the largest array available in TI ASIC technology). There was no integrated CPU, no SRAM and no High Speed Interconnect I/O. The SoC definition we agree in the industry is that the chip at least integrates a CPU (or GPU) core, then some amount of internal SRAM (or DRAM) and various peripheral functions specific to the Application. Considering this definition, “real” SoC designs have appeared in the early 2000. There are certainly exceptions to this rule, or designs integrating an embedded CPU earlier, but this were reserved to very high production volume projects.

When the chip makers have realized that Moore’ law was allowing complex SoC development, they understood that such development was only possible if they could assemble existing IP blocks (externally sourced or internally designed). Integrating various IP, each of these being a complete functional block, in a chip lead to the next problem to solve: how to efficiently interconnect these functions together and with the CPU (GPU)? Then came the need for something more efficient than just a crossbar switch (see previous post), a kind of “intelligent” interconnect system, say a Network, and because it’s to be internal, a Network on Chip: the NoC.

The above picture illustrate the move from the design of a Video Engine (in the 1990…), requiring a Village type of traffic when compared with a SoC design of the 2000 (OMAP4 from TI) requiring a City Traffic infrastructure. If we try to be more specific (and scientific!) we can say that a NoC is similar to a modern telecommunications network, using digital bit-packet switching over multiplexed links. Although packet-switching is sometimes claimed as necessity for a NoC, there are several NoC proposals utilizing circuit-switching techniques. This definition based on routers is usually interpreted so that a single shared bus, a single crossbar switch or a point-to-point network are not NoCs but practically all other topologies are.

Arteris’ FlexNoC interconnect IP product line generates a true NoC IP with distributed packetized transport and high-level SoC communication services, as opposed to a hybrid bus with centralized cross bars, as we have explained in this post.

Network-on-Chip (NoC) is an emerging paradigm for communications within large VLSI systems implemented on a single silicon chip. Sgroi et al. call “the layered-stack approach to the design of the on-chip intercore communications the Network-on-Chip (NOC) methodology.” In a NoC system, modules such as processor cores, memories and specialized IP blocks exchange data using a network as a “public transportation” sub-system for the information traffic. A NoC is constructed from multiple point-to-point data links interconnected by switches (a.k.a. routers), such that messages can be relayed from any source module to any destination module over several links, by making routing decisions at the switches. A NoC is similar to a modern telecommunications network, using digital bit-packet switching over multiplexed links. Although packet-switching is sometimes claimed as necessity for a NoC, there are several NoC proposals utilizing circuit-switching techniques. This definition based on routers is usually interpreted so that a single shared bus, a single crossbar switch or a point-to-point network are not NoCs but practically all other topologies are. This is somewhat confusing since all above mentioned are networks (they enable communication between two or more devices) but they are not considered as network-on-chips. Note that some articles erroneously use NoC as a synonym for mesh topology although NoC paradigm does not dictate the topology. Likewise, the regularity of topology is sometimes considered as a requirement which is, obviously, not the case in research concentrating on “application-specific NoC topology synthesis”. Let’s add that the first dedicated research symposium on Networks on Chip was held at Princeton University, in May 2007… pretty recent, isn’t it?

To learn a lot more about NoC and Arteris products, just go here.