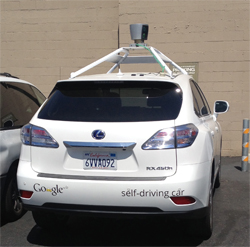 Sebastian Thrun gave a fascinating keynote at SNUG last week. It didn’t have that much to do with IC design but he discussed 3 projects that he had been involved with. Anyone would be happy to have just one of these projects on their resume but he has all these (and more).

The first is the Google self-driving car. This project actually started 10 years ago in the desert when Sebastian was at Stanford. Darpa put on a competition for autonomous vehicles. Stanford put together an entrant but like all the other cars that first year, none of them made it to the finish. But things advanced fast and the following year, when a similar challenge was run, they made it all the way to the finish in the fastest time and won. I remember seeing the car outside the Embedded Systems Conference several years ago. It is now in the Smithsonian in the air and space museum.

It turns out that hard as it is, driving in the desert is simple compared to driving in cities. Pedestrians, stop signs, other vehicles. The next challenge was city driving. Gradually the focus moved from Stanford to Google and if you live around her you may well have seen the cars driving in the area. They have logged over a million miles now. The only accidents they have had were minor fender benders that were all the other driver’s fault. The technology Google is using is still too expensive to go mainstream but that is quite a safety record. Thrun’s goal is to make driving much safer and save a lot of lives.

Here is one outside Peet’s in Los Altos. I guess the car felt like a coffee and went for a drive.

The next project was accidentally inventing MOOCs. Sebastian was teaching an AI class at Stanford and on a whim he decided to make it available online too. He was expecting a few hundred people to sign up, after all he just sent out a single email. But it went viral and more like 120,000 people signed up. MOOCs tend to have a high dropout rate since it is free to sign up and a lot of people do it just to see. I forget the final number that completed the course, in tens of thousands. Interestingly, many people at Stanford preferred to take the course online rather than showing up for lectures. The top people on the final were all non-Stanford. You needed to get down to #50 to find someone on campus. So he founded Udacity which now runs several courses open to anyone, mostly in computer related areas. 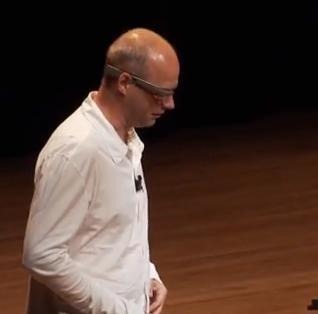 The final project was Google Glass. He was wearing them the whole time he gave his keynote. A call even came in on them at one point. He showed some of the earlier prototypes, some of which pretty much consisted of taping a smartphone to some glasses. Aparently that is really uncomfortable on the noses. They are now much smaller and lighter, although still look pretty dorky. It will be interesting to see if we all end up wearing something like that.