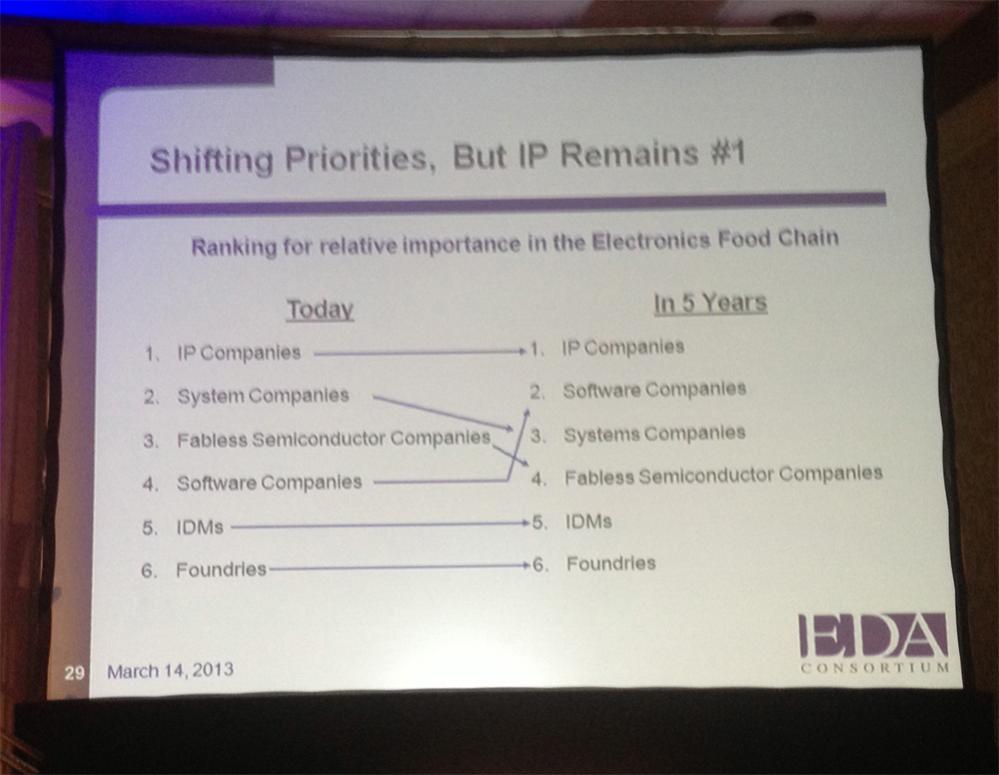 Yesterday evening was the annual EDAC CEO forecast meeting. Actually it is not really a forecast meeting any more, more a sort of CEO response to some survey questions asked of EDAC members. Rich Valera of Needham moderated with Lip-Bu, Aart and Wally, along with Simon Segars representing the IP arm(!) of the business and Raul Camposano representing startup companies.

I’m not going to try and cover everything, just pick and choose things that I found interesting.

The first question asked was whether consolidation in EDA has helped innovation. 74% of people surveyed said ‘no’ but the CEOs all pushed back. For a start, lots of innovation takes place in the bigger companies. Nobody really made the point I would have done, which is people start little EDA companies in order to be acquired, and if acquisitions don’t happen, people won’t create startups. To some extent we see that because as acquisition prices have come down, the willingness to invest in startups has also reduced.

The next question was whether acquisitions have “helped” pricing. In the sense of have prices for tools increased. Wally pointed out that Moore’s law is really a learning curve, with cost per transistor coming down as you would expect as the total number of transistors shipped. EDA’s curve is exactly the same and has been 2% of semiconductor revenue for 15 years.

To a question about whether EDA would consolidate down to 2 companies, Wally pointed out that EDA has been a trimvirate (first Calma, Applicon, Computervision; then the DMV, now Synopsys, Mentor, Cadence). It seems to be very stable so seems unlikely (although, of course, Cadence did make an attempt to acquire Mentor a few years ago).

Next was whether Moore’s law breaks down at the sub-20nm level. Survey was split 50-50. Aart said that until now Moore’s law has driven opportunity but now opportunity is driving Moore’s law. So even if prices go up, it will continue. I’m not so sure myself, if the cost per transistor increases then that quad core cell-phone will cost more than the old dual core one. Sometimes that will be viable but not always.

How about verticalization, with companies like Apple and Samsung taking design in-house? Of course they buy tools to do this but leave other companies (such as TI) in their wake. Survey seemed to think it was negative, but CEOs were positive. Wally pointed out that concentration in the cell-phone industry was greater in 2007 when Samsung and Nokia had a greater market share than Samsung and Apple do today.

EDAC members were asked which was the hottest EDA startup. Most often mentioned was Oasys. But also OneSpin, BDA, ICScape, Jasper, Calypto, AtopTech, Forte, Breker, DeFact. Funny how many of the “hot startups” have been around for a dozen years or more.

Asked about the funding environment for startups, the EDAC membership came up with “bleak,” “dead,” “poor,” “you have to turn to Qualcomm, Xilinx, Apple and Intel.”

Raul pointed out that semiconductor in general and EDA too suffer from an image problem. If you ask what the next big thing is going to be, few people say “semiconductor.”

Peggy asked about a comment from the CEO of a small company who said it would not be long before Intel acquired Synopsys. Aart pointed out that the economics wouldn’t work. But if Intel or anyone else wanted Synopsy at the revenue multiple that Cadence just acquired Tensilica for then he’s available.

To a question on cloud computing, Aart said that Synopsys had made $0 on it. Not just a low number but actually zero. Luckily all the infrastructure they needed is what is required for deploying on internal clouds so it wasn’t a completely bad investment. Raul agreed. Nimbic expected big companies to be attracted to the cloud since even in companies with tens of thousands of servers, getting 100 at the same time is problematic. But he also made $0 on it, although smaller companies designing little circuit boards (and who don’t have big internal server farms) represent a long tail that is more accepting.

0 Replies to “EDAC CEOs: consolidation, clouds, and whether Intel will buy Synopsys”