Uber Technologies won’t be reporting its latest earnings for another month, but when it does so in November the news is not expected to be good. In an effort to flip the script in advance of that report and distract attention from the ongoing COVID-19-induced decline in its core ride hailing business, Uber has launched Uber Green – a global effort to situate Uber at the center of an environment-saving shift to vehicles with electrified powertrains.

By now, it’s clear that Uber will do whatever it takes to survive – everything, that is, but the right thing. Uber has yet failed to implement a partition deployment proposition to adequately protect drivers and passengers during the pandemic.

The Uber Green effort (in Europe) is comprehensive and includes driver and passenger incentives – to drive and ride in electrified Uber’s where available – along with auto maker incentives for Uber drivers to acquire and use vehicles with electrified powertrains, coordinate with charging network operators and municipal authorities to foster the use of EVs and hybrids, and collaborate with regulators over Uber-derived data for the sourcing and installation of charging stations and enhanced carrot-and-stick policy making.

This a very different tune for Uber to be singing after former founder Travis Kalanick’s claims from six years ago that Uber would eliminate car ownership and public transportation. With ride hailing volume cut in half globally, Uber comes hat in hand to both car makers and public authorities – a wolf in sheep’s clothing – offering to help speed the adoption of cars with electric powertrains.

Uber CEO Dhara Khosrowshahi brings gifts in the form of research and data to help European cities expand their zero emission policies. For drivers he brings 50 cent and $1/ride subsidies (with annual limits) and a battery of research (in the related white paper above) describing the ways in which Uber driving in an electrified vehicle can be financially justified over a new or used diesel or internal combustion vehicle.

Yet, at the same time, Uber acknowledges that the financial proposition of actually acquiring an EV or hybrid to drive for Uber is no guarantee of financial success. Uber knows its drivers will need generous incentives to justify such a shift. 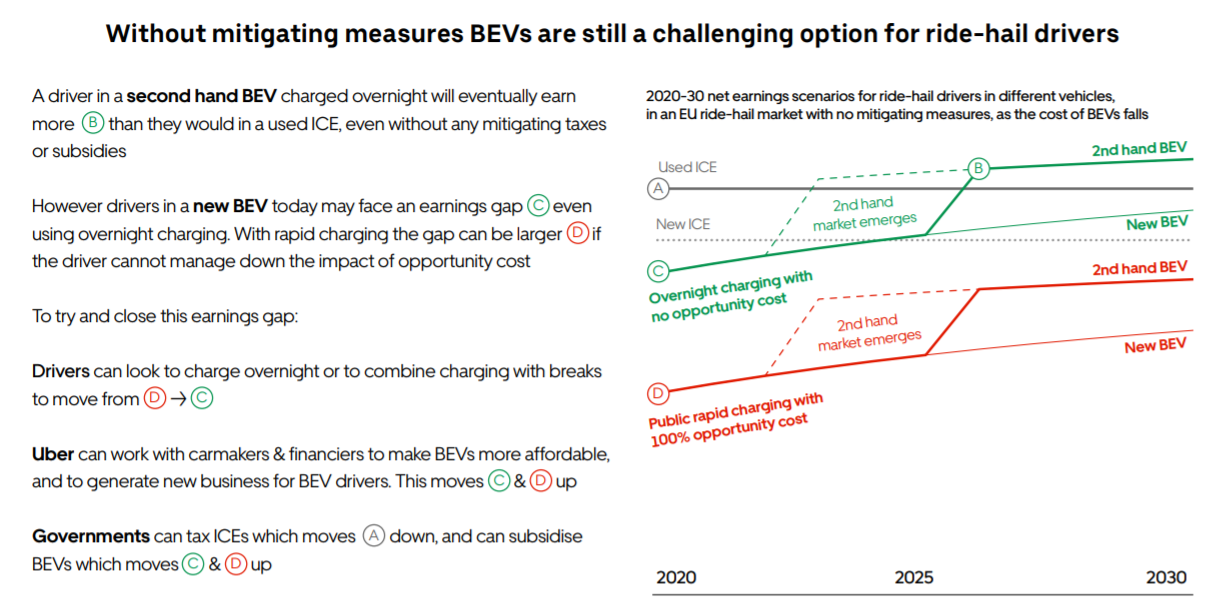 Beyond that, Uber’s cynical siren song glosses over the reality that the company controls driver compensation. So, Uber may provide a minor per-ride subsidy while adjusting driver compensation or, heaven forbid, benefits, downward elsewhere. Uber Green is a bait and switch.

Worse than a bait and switch, though, Uber Green is a cynical effort by Uber to use its global leverage to muscle its way into the policy-making activities of major municipalities and thereby worm its way to the front of the line for accessing prejudicial regulatory treatment. To do this, Uber is painting itself Green and ingratiating itself with environmental groups and organizations in an attempt to gloss over its history as a very unfriendly industry participant with a history of abusing its non-employees, undermining existing transit options, and flouting regulations.

Uber Green is a grift and no one, least of all car makers or municipal leaders, should be deceived that Uber will do anything other than what is best for Uber – even if it means mistreating drivers, passengers, competitors, or regulators. It wasn’t long ago that Uber was hacking regulators and competitors and failing to adequately check the backgrounds of its drivers.

There is one unmitigatedly positive thing that Uber could do to transform its reputation and financial prospects. Uber could launch a global effort to make partitions available on a widespread basis to its non-employee drivers and require the installation of those partitions. Uber’s failure to take this step while sitting on billions of dollars in investor cash is an enduring travesty worthy of Travis Kalanick’s legacy. It’s time for Dhara Khosrowshahi to finally put his stamp on the company and make a statement for driver and passenger safety. In the absence of this step, Uber’s ride hailing revenue won’t recover for another 12 months or worse.