During the early 2000’s, when OEM starting to question the use of LVDS to interface with display devices, two standards has emerged: High-Deﬁnition Multimedia Interface (HDMI) and DisplayPort. HDMI has been developed by silicon Image, surfing on the success of Digital Video Interface (DVI), and was strongly supported by a consortium counting Hitachi, Ltd., Panasonic Corporation, Philips Consumer Electronics International B.V., Silicon Image, Inc., Sony Corporation, Technicolor S.A. (formerly known as Thomson) and Toshiba Corporation, the “founders”. Pretty impressive list, at least in the Consumer Electronic market! The Video Electronics Standards Association (VESA) decided to launch a competing standard, DisplayPort. DisplayPort was back-up by companies linked to the PC market, like HP, AMD, Nvidia, Dell and more… The competition looked promising, as both standards exhibits the same high level features: based on high speed differential serial signaling, packet based protocol, layered based architecture, allowing to increase bandwidth by using 1 to 3 lanes (HDMI) or 1 to 4 (DP) for the most significant.

But the expected big fight was deceiving. Is it because HDMI was promoted with a strong energy by a single company, who had to be successful or to die, when VESA was acting as a “non profit” organization? Or because the initial market for HDMI, Consumer Electronic, has allowed the pervasion of the standard in the Wireless Mobile segment and the Mobile PC segment, generating huge number of HDMI powered devices to reach consumers (and a strong cash flow for Silicon Image, based on a $0.04 per port)? Nevertheless, when DisplayPort started to reach the market, in 2008, with a mere 10 Million ports, HDMI already exhibits a strong 250+ Million! 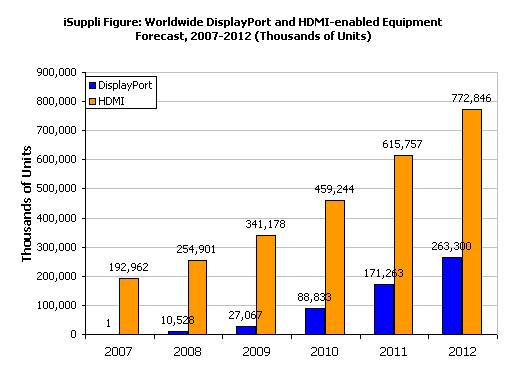 This forecast from iSupply was issued in 2007 leaves no doubt about the winner! Even more interesting is the latest data from iSupply, dated March 2011: “High-Deﬁnition Multimedia Interface (HDMI), the de facto connection standard in liquid crystal display TVs and other advanced digital equipment, will be present in nearly 630 million consumer electronic items shipped during 2011…”. In the meantime, HDMI has become the “de-facto connection standard” (OK, for LCD TV looks restrictive, but the “other digital equipment” cover: Wireless Handset, Set-Top-Boxes, Notebooks and more… so de-facto looks appropriate!). Amazingly, these two forecast from iSupply, made with a 4 year time distance, including a major, worldwide, financial crisis, are pretty consistent with 615 Million forecasted in 2007, compared with 630 Million in 2011, for the items shipped in 2011. That’s not so often that analyst are right, so we can recognize it when it happen! 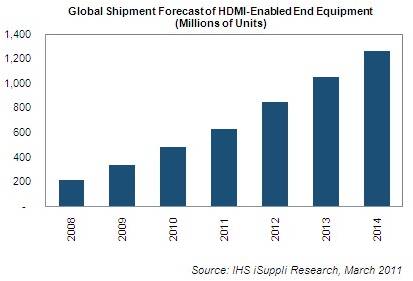 As of today, the status is that DisplayPort is finally emerging, almost exclusively in the PC segment (and with a threat coming from MIPI DSI in the mobile devices like Media Tablet, Netbook…). Ok, Apple has integrated DisplayPort in his Mobile PC, Intel has launched ThunderBolt which will use both DisplayPort and PCI Express, major Chipset manufacturers are supporting DisplayPort (but also HDMI…), but the HDMI powered items will pass the Billion in 2013… when DisplayPort, according with ResearchAndMarket survey in February 2011 will see “External DisplayPort Device Shipments to Increase 100% From 2009 to 2014”…to reach 10% of the HDMI number!

So, apparently, HDMI has won the battle. But, adopters of HDMI technology are concerned. At first, by the impact on their bottom line when selecting HDMI. The rights for HDMI standard belongs to HDMI Licensing, LLC… which is 100% owned by Silicon Image. Moreover, when a chip maker, or an OEM, wants to get HDMI certification, he has to submit his product for compliance to HDMI Authorized Testing Center (ATC) for testing. The ATC list includes 11 companies… 7 of these are Silicon Image subsidiaries. Should we mention that Silicon Image also market HDMI based ASSP? Thus, when you license HDMI, you will have to pay a per port royalty (to SI), if you decide to develop your own solution, you will have to obtain compliance for your IP or your ASSP to… Silicon Image again.

A robust alternative that would provide equivalent or even expanded high-definition capability while avoiding HDMI license costs, DiiVA remains on the horizon as a potential competitor to HDMI from 2011 onward, within China and potentially other Asian domestic markets. While still relatively early in the product launch phase, DiiVA remains a technology to watch closely … The Chinese market has shown a demonstrable propensity to gravitate to its own technical standards, and the DiiVA interface is likely to receive a boost from foreign brands looking to grow their share within the China market. And though the support enjoyed by HDMI among devices in general is impossible to ignore, the possibility that a China government agency mandates the use of DiiVA—even if only to promote regional interests in the technology sector—could spell trouble for HDMI in the years to come within the rapidly expanding China consumer market.

From an IP vendor perspective, HDMI is still a very promising market (evaluated by IPnest to grow to up to $100M by 2014, including per-port royalties), DisplayPort is taking of, and will generate a decent market (not yet evaluated in details, but DP IP market could represent a $25M by 2014) and DiiVA is just another market opportunity to develop sales for High Speed Serial Interface IP, the IP market size is still to be evaluated.