2016 will be another defining year for semiconductors and it all starts with the Industry Strategy Symposium in Half Moon Bay next week. If you have not attended one of these you should definitely put it on your bucket list. Not only do you get to hang out in a five star cliff side resort, you get to mingle with semiconductor royalty and… Read More

It was announced today that Apple has purchased a 200mm fab located in San Jose from Maxim Integrated Products for $18.2 million dollars. My initial reaction to this announcement was shock but then I started thinking through what Apple might use the fab for and I concluded this announcement is less significant and surprising than… Read More

It’s All about Packaging — In this Material World, Who Is Your Partner?
by Deborah GeigerSEMI on 11-11-2015 at 3:20 pm
Categories: ESD Alliance, Events, Semiconductor Services

With the recent release of Apple’s 6s and the form factors of internet-enabled mobile devices and the emergence of the IoT (Internet of Things), advanced packaging is clearly the enabling technology providing solutions for mobile applications and for… Read More 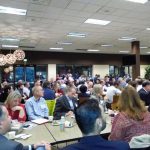 Here on SemiWiki we spend a certain amount of time discussing semiconductor equipment, especially the big sea-change items like EUV and 450mm, where everyone wants to know when (and if) they will happen. But there is another aspect to next generation processes other than equipment and that is materials. When the received wisdom… Read More

Tuesday morning press briefing
The show started for me Tuesday morning with the SEMI press briefing. SEMI said there are 1,200 booths this year, 629 exhibiting companies and over 180 hours of programming. They also said pre-registration was up from last year and they expect 26,000 visitors.

Dan Tracy then gave an update on the markets.… Read More