We’ve all seen examples over the past few years of complex IoT technology solutions to help solve real-world problems from a variety of small companies. In fact, last year while I was at the ARM Holdings annual industry analyst conference and TechCon, a gathering of the ARM ecosystem powers, you could find hundreds, if not thousands… Read More

My Tryst with Semiconductors and EDA
by Pawan Fangaria on 08-19-2015 at 4:00 pm
View Profile
View Forum Posts

Yes, today I realize it feels like a tryst with semiconductors. In actual meaning; it wasn’t a love affair with semiconductors, but I must say the greatest thing it taught me about how it approaches towards perfection. And that became the guiding principle in my life; how can I do something better. Of course nothing is perfect in life… Read More 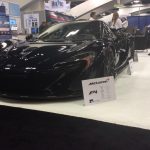 The coolest and most expensive car at DAC this year had to be the McLaren P1, priced at $1,150,00 and powered by a 903 hp gas/electric hybrid. Electronics are used in autos to provide safety features, infotainment, motor control and performance.

Blogging for Semiwiki is a very good exercise to prepare a paper submission at DAC. Writing a short article using about 600 words to pass one message, and try to deliver this message as clearly as possible. Writing a paper for DAC is very similar, as you have to be synthetic and develop a thesis in 5 slides, no more, as it’s a time limited… Read More