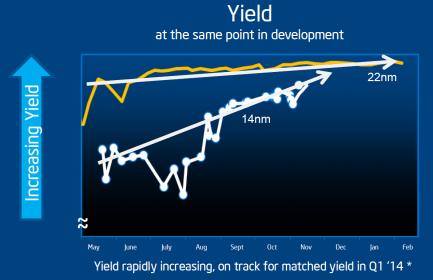 Hopefully this blog will result in a meaningful discussion on truth and transparency, and how Intel can do better in regards to both. Take a close look at the manufacturing slides presented by William Holt, Executive Vice President General Manager, Intel Technology and Manufacturing Group. You can see the slide deck HERE. Slide number four has a yield graph and that is where the truth finally comes out about the 14nm process move-in delay.

This slide tracks 14nm yield progress based on 22nm which clearly shows significant problems that led to the delay as early as July 2013 and coincides nicely with my “Intel 14nm Delayed?” blog on August 1[SUP]st[/SUP]:

One of the more interesting pieces of information I overheard at SEMICON West earlier this month was that Intel 14nm was delayed. This rumor came from the semiconductor equipment manufacturers and they would know. What I was told is that the Intel 14nm process has not left the OR development facility to be replicated in the OR and AZ fabs.

The Intel 22nm yield looks very good which means FinFETs were not as much of a manufacturing challenge as the FUDsters had predicted. 14nm on the other hand requires double patterning which is what I’m told Intel struggled with (DPT and FinFETs). The foundries tackled DPT at 20nm which is now yielding better than 28nm at the same point in the ramping process. You will see production 20nm parts from the top TSMC customers in Q1 2014, absolutely. Samsung already has 14nm FinFET tape-outs with DPT in hand which will be in silicon 2H 2014 and is on par with Intel 14nm SoCs. TSMC is roughly one quarter behind with 16nm tape-outs scheduled for Q1 2014.

“14 nanometer on-track to enter production by the end of the year” EVP and CFO Stacy J. Smith

“We are on track to start production on our 14 nanometer process technology in the back half of this year. CEO Brian M. Krzanich”

Given the comments above where yield was at a low point at the time of this conference call, I find these statements “non-transparent” to say the least. Brian Krzanich again denied 14nm was delayed at the Intel Developers Conference (9/10/2013) but had this to say in the Q3 2013 conference call on October 15[SUP]th[/SUP]:

While we are comfortable with where we are at with yields, from a timing standpoint, we are about a quarter behind our projections. As a result, we are now planning to begin production in the first quarter of next year.

I know, not a big deal, a three month delay at these geometries is well within tolerance. The problem I have is transparency. Brian looked us in the eyes and said no 14nm delays at IDF and one month later he changed his message. For a CEO with 30 years manufacturing experience at Intel I find this dishonest and that is not the Intel culture from CEO’s of the past. Read Andy Grove’s memoir “Swimming Across”, which I just did, it is all about truth and transparency and that is the foundation of trust.