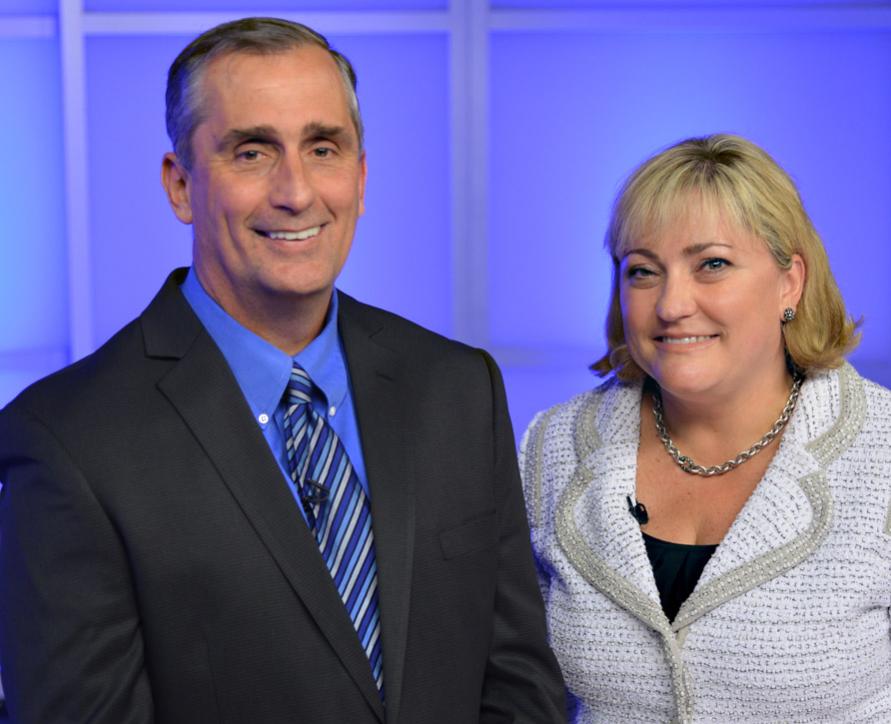 It was a generation ago when Intel, less than three years old, created the three fundamental building blocks of the compute era: the DRAM, the EPROM and the Microprocessor, an incredible feat of innovation by any measure. Manufacturing yield, not power or performance determined success of failure and in the first two
decades 2[SUP]nd[/SUP] sourcing was required for end customers to adopt the new products. Intel, though, lost control to a throng of well-capitalized DRAM competitors and would be a footnote in history if IBM had not selected the 8088 for the original PC and allowed Intel to pursue a sole source strategy. History is once again knocking at the door as the company returns to a manufacturing centricity that looks to remain a sole source supplier for the mobile computing era while leveraging its assets for complementary partners, especially those who service the Data Center build out. The transition from Paul Otellini to Brian Krzanich and Renee James will signal something even greater though, it will be the transformation of Intel to a monopoly not of architecture but one based on software.

Paul Otellini’s retirement marks the end of the road for x86 processors taking the limelight over process technology. It has actually been in the making since the turn of the century. As Intel continued to push the envelope on MHZ and performance in the late 1990s, the market was pulling in a completely different direction, first with the help of Wifi and then with 3G/4G cellular. The big Aircraft Carrier was distracted at first by the need to overcome AMD’s 64-bit lead and the growing threat posed by nVidia. Otellini orchestrated this turn around successfully but at the expense of even a dabbling in a new low power architecture. The announcement of the new Silvermont Architecture would have been much more significant if it was introduced in 2009, when Apple was in the development stages of its iPAD and if it was in synch with the press rollout of the 22nm trigate process. Intel is playing catch up but as with the past the process technology will be there to bail them out.

Intel’s massive investment in Capex still remains a strategic mystery to all but perhaps Andy Bryant and Krzanich. Is there a line in the sand at 14nm that is in reality a chasm? And beyond 14nm is 450mm like the cliffs of Dover in terms of economic scaling, reachable by Intel first and with a great lag by others. Krzanich’s chief job then has to be to extend the die cost lead that in essence turns the new mobile tablet and smartphone markets into a <$9 affair. Intel will abandon the premium price model that has existed since the late 1980s and looks more and more like a microcontroller in order to sell billions and billions of mobile units and thwart ARM. The x86 has to become a jellybean part.

Part of the argument against Intel is that it can not withstand the attack of multiple ARM vendors sourced through the Fabless ecosystem. In addition, everyone knows the x86 architecture is not designed for low power. With Silvermont, the second is no longer a question. Circuit design tricks not instructions determine power consumption and sleep power can be driven to the floor on any architecture. There is credence to the multi vendor attack strategy but overlooked by many is that what is occurring now is a compression of margins between the silicon designer and the Fab or Foundry. Intel hesitated to take this route due to the fact it did not want to undermine its existing PC business. The Mobile ULV parts selling in PCs will continue to be sold for several hundred dollars more than a Silvermont part. Silvermont on a leading edge node, in parallel with Haswell is Intel’s recognition that they have to perform an Innovator’s Dilemma on themselves at the moment that the tablet market mushrooms to hundreds of millions of units. So while Intel unleashes products that are likely to generate a little under 50% Gross Margins, the fabless players must figure out how they and TSMC can redraw the margin stack that traditionally has called out 50% margins for both players. It’s in this scenario that the market unfolds.

The elevation of Renee James to President in concert with Brian Krzanich’s CEO announcement could be a rare, underappreciated game changer. Over the past 12 months, the Google Android platform has been forked and dissected by Amazon, Samsung and Intel to meet their needs and not that of the “Be Not Evil” folks. Renee’s previous position as head of Software at Intel and a director on VMWare’s board may mean that Intel intends to take control of the different flavors of the Mobile Software Ecosystems that eventually become tuned to x86. With Virtualization and security thrown in (Androids true achilles heel) any mobile device will be able to run any software app regardless of the underlying instruction set. So in a way the thirty-year x86 monopoly gets morphed into an advanced Fab monopoly through an army of Intel software engineers.

0 Replies to “The Morphing of Intel’s Monopoly”