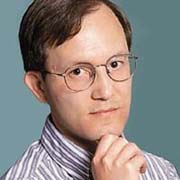 In an article published this week in microprocessor report and highlighted in Barron’s, Linley Gwennap makes the argument that Intel should stay the course and fix the PC instead of trying to offset its declines with sales into the Smartphone and Tablet space. He cites that lower PC sales growth was due to a dramatic slowdown in processor performance gains (60%/year to 10-16%/year) and that the mobile market outside of Samsung and Apple is only $1.5B in size. I think his analysis on Intel’s focus is correct, yet restrictive. Intel has on several recent occasions subtly communicated a Firewall strategy that is firm when it comes to tablets while giving way in the Smartphone space, especially if it leads to Foundry Business (i.e. Apple).

What is a tablet? The first iterations defined by Apple are soon to be challenged as the Ultrabook Convertibles come down in size and price to compete with the iPAD and likewise the battery life, touchscreen and baseband functions migrate upward. What began as a low performance consumer internet device will in 2013 expand into a broad range of compute devices to satisfy the needs of consumers as well as corporations from price points starting at below $300 to above $1200 and from 7” to 13” LCD based formfactors. This is the battleground and Intel needs x86 to succeed. Its main argument for x86 will be with corporate based on its traditional strength, which is performance. Not of the Atom variety, but of the combination of a 14nm Ivy Bridge and Haswell.

Apple’s introduction of the A6X upgraded iPADs in October was a foretaste of what is to come. The tablet market is really the successor to the notebook, relying on a better balance of battery life and performance aided by SSDs and absent the high Intel processor price. Cannibalization has occurred rapidly in the consumer channel, especially following the introduction of the iPAD mini. Next up the corporate market where performance longevity drives the CFO and CTOs calculation of 3-5 year ROIs. This is why the A6X processor is key. The much-improved performance of the A6X based on a full custom design encroaches on Intel’s Ivy Bridge turf and thereby enables the iPad to benchmark well against Ultrabooks and convertibles, effectively leap frogging competitive ARM solutions and Intel’s Atom. 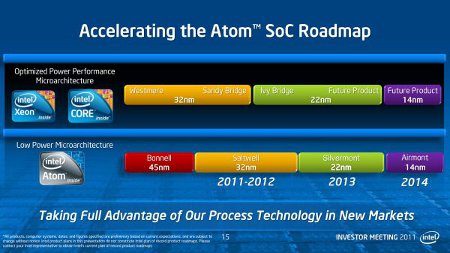 Publicly, Intel continues to communicate that the Atom processor that is behind in terms of schedules and process technology will catch up by 2014 on 14nm. However the market isn’t waiting and in fact is evolving faster than what was originally anticipated. As an example, I offer a little anecdote from a meeting I had with a PC customer a few weeks ago. I asked about whether there were plans to build a tablet with a fan and the engineer remarked for sure. This should tell you that the tablet market in 2013 will be an all out battle where performance will be pushed to its limits. It doesn’t take much to know that Intel will be driving this trend with the help of its customers. This is why I believe Intel’s roadmap will change dramatically in the months ahead as they cram peak performance into smaller enclosures while at the same time recreating extensive cooling systems as they did in notebooks more than a decade ago.

Currently Haswell is expected to enter the market in Q2 2013 at 22nm. It is designed to win the high-end PC market, including ultra books. It’s larger die size, though will prevent it from targeting the volume segment of the mobile markets until a 14nm shrink arrives with Broadwell in Q2 2014. The interim period from now until Q2 2014 presents a hole that Intel must fill. This is where I expect Intel to make a dramatic move with Ivy Bridge. First up will be a reduced MHz (~ 1Ghz) and reduced voltage (sub 1V) part to drop the thermal power below 10W to satisfy the cooling demands of even the smallest tablets. Following this, though I expect Intel to deliver a 14nm shrink of Ivy Bridge to reduce power further and to build an economical part with die sizes down as small as 50mm. With this part Intel will be able to cover the four corners of lowest cost, highest performance, best performance per watt and longest battery life.

Given the high yield of Ivy Bridge at 22nm and that it is the high volume runner, it would be a perfect candidate to ramp as soon as 14nm is ready. The combination of Haswell and a 14nm Ivy Bridge in late 2013 really can be seen as the two pillars that Intel will rely on to slow the movement away from the $35B legacy PC platform. As mentioned in a previous blog if the Datacenter business ramps from $10B in 2011 to $20B in 2016 then Intel can sustain a PC decline of roughly 1/3 and maintain a similar cash flow. This assumes that the Fabs are adequately loaded.

The aggressive mobile strategy outlined here, leaves open the question about Atom’s long-term viability. I believe the value of Atom to Intel has to do more with training Engineers on low power circuit design, efficiencies in developing custom SOCs and building out IP. The tablet and ultrabook mobiles are vastly different from Smartphones in the one area that counts most and that is increased space that offers vastly more degrees of freedom in which to fit the processor, memory and wireless components.

The Smartphone is quickly becoming a two horse race, where volumes will eventually reach multibillions of units. Apple and Samsung are both continuing to vertically integrate across most every component. Samsung is on a path to be completely internal, while Apple is cobbling together a supply chain that includes the “over the hill gang” of formerly great Japanese suppliers about to be cost leaders with the rapidly depreciating Yen and leading edge semiconductor giants like TSMC and most likely Intel. Having both will allow Apple to have the best economics and leverage.

Intel’s retreat from the smartphone market with the exit of Atom will be necessary for Apple to sign on. Despite rumors to the contrary, they will be happy to build Apple’s ARM processors if it comes at the expense of Samsung or TSMC. In 12 months Intel’s expanded six Fab foot print will be complete and available to support any combination of 22nm and 14nm processes (85% of the equipment in the fab works for both process nodes). Today it takes roughly three to meet the demands of the x86 market. Intel’s CapEx budget will drop dramatically in the coming year enabling Intel to use its tremendous cash flow to “buy” foundry customers. Likewise, if the Fabs remain empty, the cash flow will diminish rapidly.