It is now time for the EUV community to realize they are caught between the proverbial Scylla and Charybdis. In Greek mythology, the two monsters terrorized ships that were unlucky enough to pass between them. By avoiding one, you approached the other.

S for Scylla, or Stochastics

Scylla was a former beautiful nymph turned into a frightful monster with six dogs forming her lower body [1]. The dogs would devour passers-by. In the same way, photons are devoured under situations where stochastic effects (due to photon shot noise) are aggravated. Table 1 lists the aggravating factors for EUV.

Table 1. Factors aggravating stochastic effects for EUV. The listed number indicates how much the dose must be multiplied to account for photon shot noise. References cited in text.

Figure 1. Estimates of the number of diffraction order combinations and the consequent shot noise impact for different lithography systems.

Since the P-V band is proportional to the square of the feature size, the smaller feature size worsens the shot noise. However, the shorter wavelength, larger NA, larger partial coherence and larger cell pitch also aggravate shot noise by increasing the number of diffraction order combinations making up the final image. The easiest way to combat this effect is to reduce the pupil fill [2]. This has already happened for immersion lithography since it is already operating near the resolution limit, while on the other hand, EUV lithography users are tempted to use higher pupil fill with conventional or annular illumination. Thus, ASML had to provide users with low pupil fill options with the recommendation to use them [3,4]. However, it is not enough to merely minimize the fill area; the wide extent of an infinitesimally narrow ring of points can still support a larger number of diffraction order combinations (Figure 2). 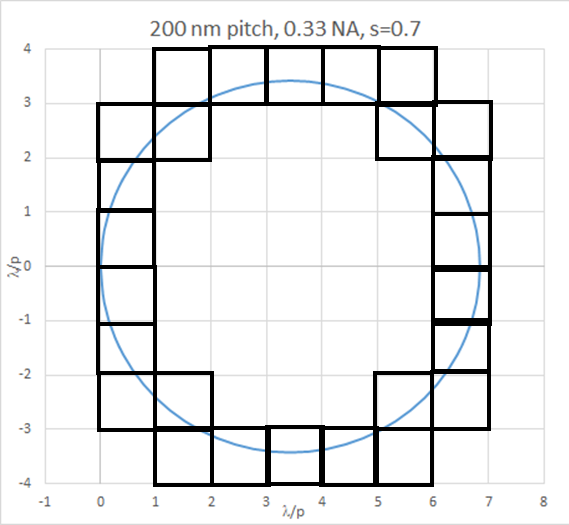 Figure 2. An infinitesimally thin circle of illumination points can still produce a wide range of diffraction order combinations. The anchor source point is at the center left.

Other fundamental considerations, when reviewed, also can be seen to worsen the stochastic behavior. Defocus [5] affects all lithography systems, but worsens the already severe situation for EUV. It is generally expected to be minimized by optimized illumination. EUV also has some unique traits, such as being a band of wavelengths with a few % bandwidth [6]; photons for each wavelength are independent from others, and behave slightly differently in the imaging due to the different reflectivities for each at each optical element. Likewise, different angles of incidence and reflection also lead to different reflectivities [6]; as this occurs at the object (the mask) this has observable effects such as image shifts [3]. All told, for a full pupil fill the EUV dose can be multiplied hundreds, even thousands of times. Thus, pupil fill reduction is expected to help rein this in, but even in the best illumination case, a dose increase of several times due to the wavelength bandwidth cannot be avoided.

A minimal pupil fill minimizes the stochastic effects, but it consequently brings EUV closer to the other deadly monster.

C for Charybdis, or Central-Ray Rotation

Charybdis, the other monster, was basically a whirlpool that sucked things in [7]. The use of low pupil fill for EUV inevitably leads to facing the rotating central ray and plane of incidence [8] across the exposure field, or “slit.” This is a necessary consequence of enforcing uniform intensity across the exposure field. If the plane of incidence were required to be fixed across slit, the rays must be in the same direction across slit, after being collimated by the previous mirror. What needs to happen is the incident ray at one position needs to be reflected from the previous mirror at a different angle (with respect to its local surface) than for another position (Figure 3). The angular dependence of reflectance or reflectivity will cause the two positions to have two different intensities. Furthermore, the originally targeted rotational symmetry of the optical design (around the optical axis) would be broken. The only way to maintain consistency reflected intensity and rotational design symmetry would be to have the plane of incidence rotate across slit.

Figure 3. To change the plane of incidence, the surface itself must be rotated. This results in a change of reflectance or reflectivity, preventing illumination uniformity from being maintained across the exposure field.

For a low pupil fill, the illumination directions are constrained. When the plane of incidence is rotated, these directions are rotated as well, away from their originally targeted orientations relative to the features to be imaged. SK Hynix along with KLA report the NXE:3400 to have +/- 18.2 degrees of azimuthal rotation across slit [9], yet the proposed leaf hexapole range is about 15 degrees. For QUASAR illumination optimized for 40 nm pitch holes, the tolerance is +/- 15 degrees [10].

In Homer’s epic story The Odyssey [11], Odysseus his crew were able to avoid being completely killed by Scylla and Charybdis once, losing 6 men to Scylla. However, due to subsequent crimes by the crew, they were punished by being driven toward Charybdis on the return, with only Odysseus surviving by clinging to a tree. EUV’s similar story is a brush with the stochastic beast, which forces an approach toward rotating out of control, from which the only escape would be to reduce the field width. It’s definitely a story to remember.