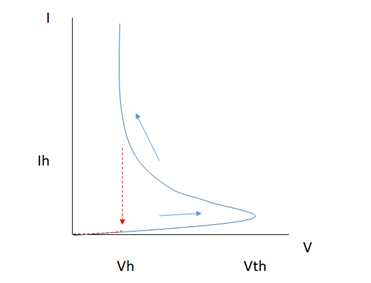 What makes transistor replacement attractive?
The driving force behind these developments is the reduction of memory cell footprint. The memory element can be stacked directly on top of a “selector” that acts to pass or block current, depending on the applied voltage across the cell [3]. The selector itself is smaller than a transistor as it is simply a layer stacked between electrodes. The lack of a transistor also removes the restriction to build the memory array directly on top of the silicon substrate, enabling the stacking of multiple layers to form a 3D memory array. Moreover, the circuitry that normally surrounds the memory array can now be placed underneath the array, further saving chip area.

Brief description of threshold switching
Threshold switches have actually been around for a while, in many forms, but gained particular notice after Stanford Ovshinsky published his observations of the switching behavior in disordered semiconductors in 1968 [4]. In particular, phase change memory includes the use of amorphous chalcogenides, which exhibit the following interesting behavior [3,4]:

(1) The amorphous chalcogenide maintains a very high resistance up until a high enough voltage, the threshold voltage (Vth) is reached;

(2) Upon reaching the threshold voltage, the material enters an extremely conductive (“ON”) state, and the voltage across the material is reduced;

(3) The material remains in the conductive state until the voltage across it is reduced below a holding voltage (Vh), which is the voltage needed to sustain a minimum holding current (Ih). At this point, it returns to the initial high-resistance (“OFF”) state.

The behavior can be visualized in an I-V curve below: 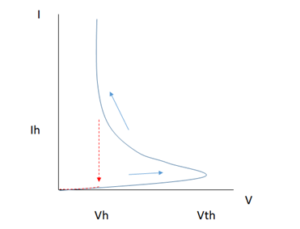 Threshold switches can only be used with specific resistance-based memories
Threshold switches involve switching between currents orders of magnitude apart. As a result, any memory element connected in series with the threshold switch must also be able to conduct fairly high currents. This precludes the usual charge storage memories like DRAM or Flash which use insulators. Phase change memory is a more common companion to threshold switches [6]. Moreover, some of the other emerging memories may not be compatible either if they will be damaged by the sudden current surge.

Figure 2. A threshold-switched cell needs a current-limiting element like a resistor to limit the current from reaching damaging levels.

The minimum read current also sets a limit on how many times the cell may be read before the memory element is disturbed, i.e., accidentally changed from one resistance state to another. This will be covered again later.

Voltage margin can be tight
Since threshold-switched memory cells will be arranged in a crosspoint array, operation voltages will be designed accordingly. Figure 3 shows the most commonly used half-select scheme, where unselected cells in the same row or column as the selected cell necessarily receive half the voltage that the selected cell receives. 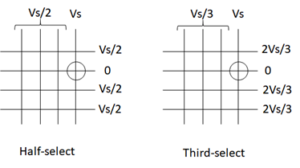 Bottom line: cost of memories based on threshold-switching

In the end, widespread acceptance of a given memory technology depends on how effectively its cost can be driven down. Threshold switches offer a significant starting point due to their smaller footprint compared to transistors. Moreover, they are free from the usual transistor scaling issues such as short-channel effects and contact resistance dependence on doping [11, 12]. An even bigger plus is the large current density (>10 MA/cm2) that is generally available [3].

The cell size for a 1X nm DRAM is 0.0026 um2 [13], while the cell size for a 3D XPoint memory is 0.00176 um2 [14], indicating the cell size advantage already exists for a threshold-switched cell. A future cell size of 0.02 um x 0.02 um has an equivalent cell density to 100 stacked layers of 0.2 um x 0.2 um 3D NAND Flash cells, the current state-of-the-art for cell density. A larger cell size of 0.04 um x 0.04 um needs 4 stacked layers to achieve the same density. Thus, scaling threshold switches to 10 nm would provide a big boost to their becoming mainstream. That said, it also requires the readiness of the resistance-based memory element attached to the threshold switch, as mentioned above. Therefore, the replacement of transistors in memory cells by threshold switches requires the widespread acceptance of resistance-based memory as an alternative to charge-based memory.

[7] A. L. Pergament, G. B. Stefanovich, A. A. Velichko, S. D. Khanin, “Electronic Switching and Metal-Insulator Transitions in Compounds of Transition Metals https://www.researchgate.net/profile/Alex_Pergament/publication/257231373_Electronic_Switching_and_Metal-Insulator_Transitions_in_Compounds_of_Transition_Metals/links/5475ad030cf245eb4370f15e/Electronic-Switching-and-Metal-Insulator-Transitions-in-Compounds-of-Transition-Metals.pdf