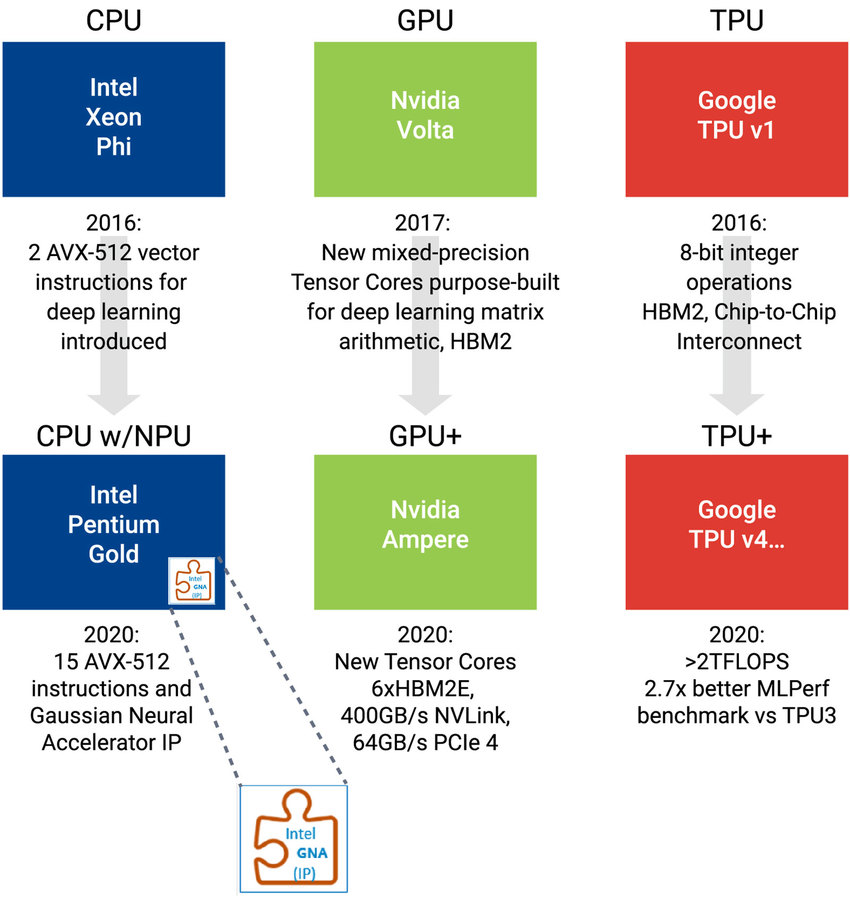 Why In-Memory Computing Will Disrupt Your AI SoC Development
by Ron Lowman on 03-22-2021 at 6:00 am
View Profile
View Forum Posts

Innovative designs using in-memory computing are intending to disrupt the landscape of AI SoCs. First let’s take a look at the status-quo that startups using in-memory computing intend to disrupt. AI hardware has taken a huge leap forward since 2015 when companies and VCs started investing heavily into new SoCs specifically for AI. Investment has only accelerated over the past 5 years, leading to many improvements in AI hardware design for industry leaders. Intel’s x86 processors have added new instructions and even a separate NPU engine. Nvidia has added specific Tensor Cores and forsaken GDDR to implement HBM technologies to increase memory bandwidth. Google has developed specific ASIC TPUs, or Tensor Processing Units, dedicated to AI algorithms (Figure 1). But even though these architectures continue to improve, investors are looking to startups to develop the next disruption in AI technology.

Why are Disruptions for AI Compute so Interesting?

The three key reasons for heavy investment into AI hardware are: 1) the amount of data generated is growing exponentially and AI is the critical technology to address the complexity; 2) the costs of running AI algorithms in power and time are still too high with existing architectures, specifically at the edge; 3) the parallelization of AI compute engines is reaching die size limits, driving these systems to scale to multiple chips which is only practical in cloud or edge-cloud data centers. Together, these new challenges are driving designers to explore new, innovative hardware architectures. In-memory compute is looked upon as one of the most promising hardware innovations because it may provide multiple orders of magnitude in improvements.

What is In-Memory Computing?

Software and Hardware for In-Memory Compute

In-memory computing includes both hardware and software elements, which can cause some confusion. From a software perspective, in-memory computing refers to processing analytics in local storage. Basically, the software takes full advantage of the memories closer to the compute. “Memories” is a bit vague from a hardware perspective and can refer to DRAMs, SRAMs, NAND Flash and other types of memories within the local system rather than sourcing data over a networked software infrastructure. Optimizing software to take advantage of more localized memories has vast opportunity for industry improvement and teams of engineers will need to continue focus on these innovations at a system level.  However, for hardware optimizations, in-memory compute offers bit level innovations that more closely mimic the human brain which is 1000s of times more efficient than today’s compute.

In-memory computing hasn’t just arrived as a magic solution to AI algorithms—it has differing implementations and is evolving from a progression of innovations. The implementation of register files and caches has been around for decades and near-memory computing has been the natural progression of improvement and has seen implementations in new SoCs over the past several years. AI algorithms require millions, if not billions, of coefficients and multiply-accumulates (MACs). To efficiently perform all these MACs, customized local SRAMs for an array of MACs are now designed into SoCs for the sole purpose of performing AI model math, i.e., matrix/tensor math. Integrating dedicated specialized local SRAMs for an array of MACs to perform AI model math is the concept of near-memory compute. In near-memory compute, local SRAMs are optimized for the purpose of storing weights and activations needed for their designated MAC units.

New memory technologies are such as MRAM, ReRAM and others are promising as they provide higher density and non-volatility when compared to traditional SRAMs. Improvements over SRAMs can increase the utilization of the compute and memory on-chip. Utilization is one of the most critical design challenges for AI SoC designers (Figure 2). SoC designers need memory subsystems designed specifically for AI data movement and compute regardless of the technology used.

The key challenges for AI SoC design with memory systems relate back to the number of MACs and coefficients that need to be stored. For ResNet-50, over 23M weights are needed and that computes into 3.5 billion MACs and 105B memory accesses. Not all are running at the same time, so the size of the largest activation can be the critical bottleneck to the memory subsystems. Control engineers know that efficiencies are made by designing bottlenecks to be at the most expensive functions of execution. Thus, designs need to ensure that their in-memory compute architectures can handle the largest layer of activation coefficients effectively.

Meeting these requirements demands huge amounts of on-chip memory and intensive computation of the multiple layers. Unique techniques in memory design are being developed to remove latencies, remove the size of coefficients and remove the amount of data that must be moved around the SoC.

Synopsys provides a wide array of IP options for customers to implement in-memory computing. Optimized memory compilers specific for density or leakage are used to develop the local SRAMs for near-memory implementations where sometimes 1000s of MACs are instantiated. MACs can leverage a portfolio of Synopsys Foundation Core primitive math functions that includes flexible functions such as Dot Product, a common AI function.

In addition, Synopsys DesignWare Multi-Port Memory IP enabling up to 8 inputs or 8 outputs improves parallelism within the compute architectures. Multi-port memories are much more common within designs since AI has become so prevalent.

Synopsys developed a patented circuit that demonstrates innovations supportive of in-memory compute. A Word All Zero function, shown in Figure 3, essentially eliminates zeros from being processed. Why move zeros to multiply? The Word All Zero function significantly reduces the compute required and can reduce power by up to 60% for data movement within the chip.

How fast in-memory compute is adopted in the industry remains to be seen; however, the promise of the technology and conceptual implementation with new memories, innovative circuits and creative designers will surely be an exciting engineering accomplishment. The journey to the solution is sometimes as interesting as the final result.